“The ladies’ is broken”: A tale from the road.

It had been a long, hot day on the road through the southern Prairies – mile after mile of absolutely nothing on the horizon, with only the odd tree or ramshackle homestead to break the monotony. It was harvest time and the dust was everywhere, in every crevice and pore even under the eyelids… especially under the eyelids. I felt like I’d just done 300 miles in a sand blaster and when we finally pulled into a campground for the night all I wanted was a nice long shower, and a beer. In that order.
After registering and getting our tent set up and our gear unpacked, Miz Liz headed off in search of a couple of cold beers and I headed to the bathrooms.
The hut was typical campground chic – cement floor with peeling green paint, urinals and toilets down one side, sinks on the other, and 2 shower stalls at the end, both of which were occupied.
I didn’t expect the wait to be very long, so I started getting ready. And that’s how it happened that I was wearing only a towel – around my neck – when the first stall opened and this absolutely stunning brunette stepped out.  Not being the first time in my life I’d stumbled into the wrong bathroom, my first reaction was to make sure I was in the right place. Yup – those were definitely urinals on the wall. 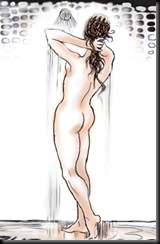 “The ladies’ is broken” she said as she nonchalantly reached past me for her towel.
“Uh… Yeah… No problem…” I stammered as I tried not to stare too obviously at the best (and only) scenery I’d seen all day. Slowly gathering my wits I was just about to offer to help her dry her back when she said, “Hurry up hon” and out of the second shower stepped Hulk Hogan’s lost twin brother. All of six-feet-and-a-bunch he was huge; even his muscles had muscles, all covered with fine renderings of skulls, knives and assorted other examples of the tattooist’s art.
So discretion (and self-preservation) being the better part of valour I shut my mouth, averted my eyes and darted behind the curtain before he got any ideas about any ideas that I’d already got.
Later, when I returned to the campsite Miz Liz asked how the shower was. “Fine” I said, “but the ladies’ is broken” as I reached for a cold one.