We’ve enjoyed an unseasonably early spring here, and with temperatures in the mid-50s I’ve been itching to get out for that first ride. Unfortunately, our laneway is still covered in spots with quite a bit of snow, ice, and greasy mud on which I have no intention of trying to keep the HD upright. But the XL? No problem.

Since the XL is currently unlicensed and uninsured (shhh, don’t tell anyone) I’m limited in where I can ride but fortunately, right at the end of our driveway, is California Road.

California Road has nothing to do with California, and little to do with being a “real” road. 10 kilometres (6 miles) long it’s a seasonal shortcut, barely maintained by the township in summer and used as a snowmobile trail in winter. At this time of year it’s still partly snow covered with the rest of it being large puddles, potholes, and greasy mud; in other words, a perfect road for thrashing around on a dirt bike.

And so I decided to go and get muddy, a mission I accomplished admirably even though I only got about half way to the end of the road before coming across a washout that stopped any further progress. I considered trying to ride across on the logs, then considered what the summer would be like with various body parts in casts, then I turned around (insert chicken sounds here).
I also took the GoPro and used the resulting video as an opportunity to play with video editing, posting to YouTube, etc. So here’s an abbreviated 3-minute video of my ride. 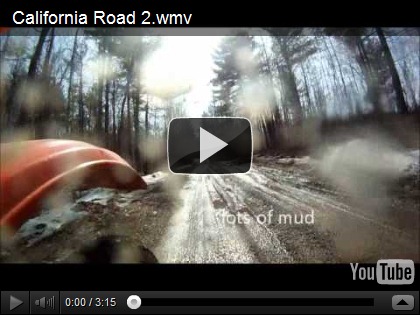