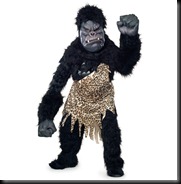 Christopher Chabris, a psychology professor at Union College performed an experiment in which he had a number of people passing a basketball back and forth on stage. He then asked the audience to count the number of passes. While the ball was being passed back and forth, and the audience was focussed on counting the number of passes, a person wearing a gorilla suit stepped out on stage among the basketball passers and stood there for 9 seconds before exiting. 50% of the audience did not see the gorilla because they were so focussed on the task at hand – counting the passes. (There’s a great video on this experiment here.)
So apply that to the real world and a driver mentally replaying the fight she had with her husband that morning, or taking direction from his boss via cell phone while driving, or yelling at the squabbling kids in the back seat to shut the f*** up! Your presence just doesn’t register, and probably wouldn’t even if you were driving a Mack truck.
Of course this applies to motorcycle riders as well. Just  think back on how many times you were preoccupied with something and overcooked that exit onto an off-ramp, or completely missed a turn, or forgot to put the side stand down before getting off the bike. It’s happened to all of us at one time or another, but usually with less painful results than trying to tango with a cage.
It’s not clear to me how understanding what’s really going on can make me any less invisible to some drivers, but it does help me understand my own riding (and driving) habits and make me much more aware of the impact of distractions on my situational knowledge while on the road. And that’s a good thing.