As some of you who have followed my blog for a while know I used to do a lot of long distance riding back in the day. And as anyone who has done so can attest a road trip never fails to generate a lot of stories – some good, some bad, and some even real. One of my earliest posts after I started this blog described a small part of one such trip – a detour to Manyberries Alberta that didn’t turn out quite like we’d hoped when we got up that morning. I ended that post with a promise to tell the rest of the story about our experiences that day.
Well it’s taken 4 years, but here it is. 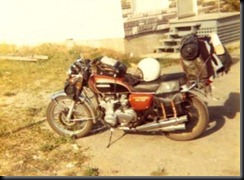 We left the Honda dealership in Medicine Hat still covered in now-dried mud and still with the left handlebar end pointing to the sky. (Check out the original post to find out why.) But now I at least had a new set of bars lashed to the top of our luggage, waiting for us to find a campground for the night and do some much-needed repairs.
Given that we both looked like Pig-Pen of Peanuts fame, leaving clumps of dirt everywhere we went we were hoping to find a

decent campground with laundry facilities. That was the plan. Unfortunately it also seemed to be the plan of a lot of people on that road that day. We passed campground after campground, all with the “No Vacancy” sign lit up. It was getting dark quickly so when we finally spotted a provincial campground located right beside the highway we pulled in. It was primitive – some tent sites and a toilet seemed to be the extent of the facilities - but at that point we didn’t care any more. There wasn’t even an attendant; later on a provincial employee would come by and collect the fee.
As we pitched the tent by flashlight I noticed a group of about a dozen riders gathered at a site just a few yards away, so once we were organized I walked over to say hi. They had some beer (the great ice breaker) and we got talking and sharing stories.  Since they were all riding Harleys I took some ribbing about riding jap crap, but got some respect back when describing the accident in infinite detail and what a death-defying feat it was to ride the crippled beast through hell and high water just to get to the campground. I felt a bit like Arlo must have, sitting on the Group W bench. But it was all good.
Before I knew it an hour or so had passed and the Missus was at my shoulder. “Don’t you think you should fix the bike while you’re still sober?”
Subtlety was is not her strong suit, besides she was right. Changing the CB 550 bars was a pain in the ass. The wiring was internal and it all fed into the headlight nacelle where it entangled with several yards of wiring harness in a very precise yet totally arcane way else nothing worked. And getting that wiring back into the headlight without accidentally breaking a connection or two was a feat best left to those who are proficient at putting 10 pounds of shit into a 5 pound bag.  And being in the bag oneself would not help.
That’s when the flashlight batteries died.
I asked my new-found friends if anyone had a flashlight I could borrow or some batteries. Of course no one did but one fellow offered to bring his bike over so I could work by the light of his headlight. When he started his Harley I think he woke everyone up in a 5 county radius but that was too bad for them; I had light and that’s all that mattered. I also now had an audience as I worked. But the job, for once, went smoothly and a half-hour later I had it all buttoned up, the old bars were in the trash bin, and I was thanking my neighbours for the light and their enthusiastic ‘encouragement’ as I  worked.
By now it was nearly midnight. We’d had a long day and so we wished them all a good night and crawled into our tent.
At 12:01 the first freight train came by, so close the pulsating headlamp danced images on the walls of the tent while the horn’s blast for a nearby level crossing dopplered as it went by. An hour later, another one. And then another one. Every hour. On the hour. All night. Competing with the endless stream of semis roaring by on the highway as trains and trucks raced to their final destinations.
No wonder the campground wasn’t full. The main Canadian Pacific rail line was about the same distance from us to the south as the highway was to the north. It would seem the Province of Alberta had this scrap of useless land and designated it a campground for the unwary – or those who only wanted to party all night anyway so who cared?
Peace seemed to descend finally just as dawn was breaking, or perhaps it was utter

exhaustion, but whatever, we were finally getting some much needed rest when the earth shook and the skies were rent by the sound of a dozen straight-piped Harley-Davidsons starting up. Bleary-eyed, I looked out the tent flap just in time to see our neighbours and mechanics’ helpers turn onto Highway 1 heading West back towards Medicine Hat.
And that’s when I saw the patches prominently displayed on the backs of their jackets. Fortunately I hadn’t noticed the night before else I probably would have kept a respectful distance and missed out on another good story from the road.