Ever since I got my Dyna I had been noticing that some times when accelerating out of a corner at speed it would seem as though the back end would shift sideways just a little bit. It was never enough to cause any control issues but always enough to ratchet the heart rate up a notch or two for a few seconds.
And so the hunt for the culprit began.

Everything was to spec but still, on occasion, the seat of my pants would tell me something was wrong. The closest I could remember to that sensation was many years ago when I test rode a Norton Commando on which the rear axle bolt hadn’t been properly tightened, allowing the alignment to change mid-corner causing the back end to swing out just enough to change the tracking. (I noticed this in the first corner after a straight road run of a few miles at 100+ mph!)
I wanted to get a better look at what was happening. 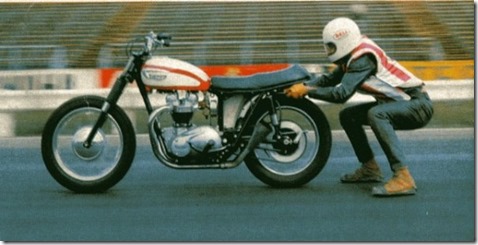 But decided instead just to let Google be my friend. It turns out that this is a not unknown problem with Harleys (and presumably other marques) that have the rubber-mounted engines. What happens is the engine mounts are designed to minimize the effects of the up-and-down vibration and so work best in the vertical plane. However when cornering hard the stresses are being put on those mounts in the horizontal plane. Combine that with some enthusiastic acceleration and the engine mounts can flex just enough to cause the rear wheel to track out ever so slightly. And the rider to say a hasty Hail Mary.
There’s even a term for it, rear steer, which is, as I think about it, a pretty accurate description of what is happening.
Which begs the question: Why doesn’t the MoCo address this issue in their design?
It turns out they did, on the Buell. But for whatever reason that enhancement didn’t find its way onto the Dyna. Perhaps it was too expensive, or they thought most riders riding under normal conditions would never notice (which may be true, but if they do they will REALLY notice). But the fact many Harley riders won’t push their bike that hard doesn’t change that it remains a design weakness, still being propagated as far as I know on current models.
Of course there are products on the market that purport to “solve” this problem through additional engine bracing, but they are not cheap. However since I’ve tried everything else and love this bike except for that one issue I will probably break down and do the handling upgrade. So now it’s a just matter of sorting through the options to find the best solution.