Hands up everyone who has heard of the Britten V1000. Anyone? No, me either. 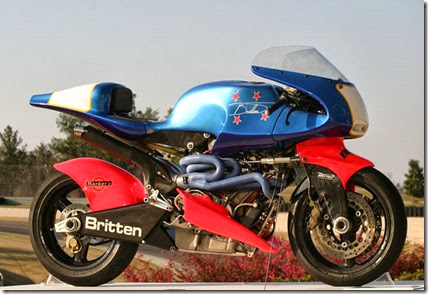 Turns out John Britten was the nearest thing to a modern day Burt Munroe, of The World’s Fastest Indian fame. Also a New Zealander, Britten decided in the late 1980’s/early 1990’s that race bikes of that generation could go faster – a lot faster – and so he decided to build a better bike to compete with Ducati and the other factory teams on the world road race circuit.
Except all he had was his ideas, his garage, some basic tools, a bunch of friends, and a very understanding wife.
And that’s what he did. He and his buddies managed to build a brand new 1000 cc, twin cylinder motorcycle, designing, casting, machining, manufacturing, and assembling it all from the ground up, a motorcycle that, in it’s very first race, placed second behind a factory-built Ducati.
That win turned out to be no fluke. With a 2nd place finish they attracted some financing that then allowed them to cover some of the basics, such as testing. Over the next few years the Britten V1000 went on to win many races and set numerous speed records, impressing all who rode, or competed, with the V1000.
Sadly John passed away from cancer in 1995 and the company died with him. Only 10 of the motorcycles were ever made. All are currently in private collections.
It’s a helluva story, and I guess if you were following motorcycle racing at that time you would certainly know the name. But it’s never too late to catch up. There’s a great YouTube video  out there just waiting for you to link to it and marvel at what one man with a dream can accomplish. Check it out.