Last Thursday Dan Smith, a 65-year-old retiree using a cane and carrying a plastic bag containing his meds turned himself in to Gatineau police to begin serving an 11-day sentence for refusing to pay a fine for having an unlicensed cat.

It turns out our hero was separated from his wife and living in Ottawa, but he frequently visits her in her home across the river in Gatineau. That’s where he got nabbed.

One day Dan answers the door and there’s a bylaw officer there who claims he has an unlicensed cat. “I don’t have a cat” he says, “There’s a stray that comes by periodically and we sometimes feed it. But it’s not our cat.”

Ten days later the bylaw officer is back, with 2 police officers in tow, and issues a $100 ticket for not licencing the stray cat.

Dan says, “Not my cat; I’m not paying.” and goes to court to fight the ticket.

At court he presents ID that shows he lives at a different address. His ex-wife confirms that Dan doesn’t actually live at the house where the ticket was issued, and that it’s a feral cat that she occasionally feeds. Doesn’t matter, says the judge, and hands him a bill for $326 that covers the original fine plus court costs. Or jail time.

At this point our hero really digs in his heels and refuses to pay, so jail it is. His ex-wife doesn’t seem to mind the jail option. “Maybe I’ll have a rest for a few days” she says.

And that’s how Mr. Smith ended up surrendering to police last Thursday, which was when he got the first bit of good news - he was only going to have to serve 3 days instead of 11. He spent Thursday night in an overcrowded cell (3 inmates, 2 beds) where he was treated like “a rock star”, and then Friday got the second bit of good news – due to overcrowding at the jail he was being kicked out to make room for other scofflaws who were arriving to serve weekend sentences.

Apparently his ex-wife has since licensed the feral cat.

And that’s your tax dollars at work. Pathetic. 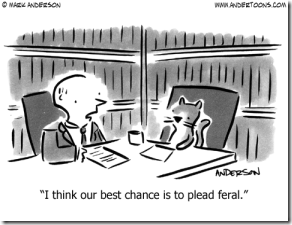