Some time ago I acquired an old Singer sewing machine base with some vague plans of using it to make something. Six months later it was still taking up space in the garage so I decided I’d best get to work. Besides, riding season was over, as was the golf season, so I had nothing else to do with my time. Right, my dear? 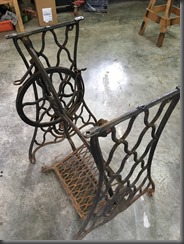 So first job was to repair, sand blast, and paint the treadle frame.  Fortunately, other than being rusty from being out of doors for a while (previous owner), it was in decent shape with only a couple of small cracks to be repaired. I got it all moving freely and made a replacement treadle arm. All it does is spin the wheel, but that’s okay. With a fresh coat of paint it finished up even better than I expected. 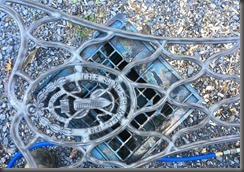 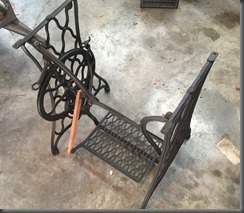 Then it was time to decide on a top. I always have a pile of leftover scraps from various projects (never, ever throw anything out!), and I found a small piece of padauk which I thought would make a nice table. But it was too narrow, so in order to make it fit I had to cut it diagonally and slide the two pieces past each other to get the necessary width, which left an unsightly seam. Rather than try to hide the seam I decided to accentuate it by gluing in some bits of maple and cherry I also had laying about. Then it was lots and lots of hand sanding and finishing. 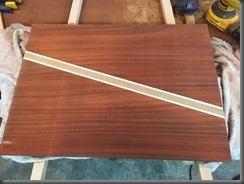 Today was the big day when I put it all together and I think it turned out pretty nice. So nice that the missus has already claimed it as a Xmas present. Perfect – one less shopping trip to make. 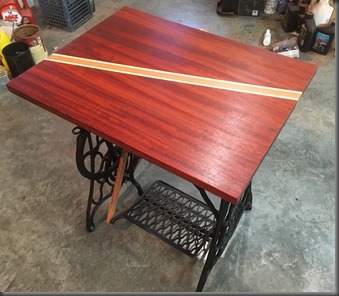 And now I have a little more room to work on some of the other projects on the infinite list of things to do.