What happens in Vegas... 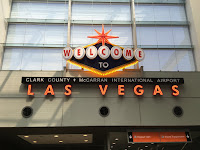 Well, I’m now back from a four-day guys trip to Vegas. While a core group goes yearly for Superbowl weekend, I tag along only periodically. As one would expect there’s usually some golf involved, some drinking involved, some eating involved, and some gambling involved, and this year was no exception. What was the exception was the weather. It was, compared to previous years, dreadful. Freezing temperatures, cold winds, drizzle, and some hail made the golf memorable, even if for all the wrong reasons.  And having to bundle up in layers to go walkabout was not my idea of fun – even if the scantily-clad showgirls on the Strip still managed frozen smiles in hopes of getting tips for photos from parka-clad passersby.

And, as usual, there were the characters. The most memorable for me was the 60-year-old (she told us) female cabbie who entertained us with tales of her grandfather’s golf with Sam Snead, how her grandmother was a rich socialite from Pittsburgh. Married twice, subject to spousal abuse in both cases, divorced, she now has a room-mate (male) who spoils her dogs, softening them up to the extent that the police are no longer afraid to come to her house. Never prejudiced before coming to Las Vegas, she now hates pretty much everyone – and she wasn’t shy about articulating why. And Uber drivers “are the worst”. It was a 20-minute monologue, frequently punctuated by a smoker’s hack, that left one wondering if it was all just an act put on for the rubes.

Then there was a friend’s shuttle driver whose story was he hailed from South LA. A gangbanger gone straight (he says) after a couple of prison stints. He has 9 children by 9 different baby-mamas back in LA. He was married to a “crack whore” but that didn’t last once he found out she was into drugs. He is now remarried but is having trouble with his wife because he refuses to buy a tent for her homeless brother so he’ll have a place to sleep. “He can get a job and buy his own damned tent!” He doesn’t know how long this marriage will last. Perhaps he’ll soon need his own tent. And just what are the qualifications for driving a cab in Las Vegas anyway?

But the strip was as gaudy and glitzy as ever, the new Harley dealership was imposing, the casinos were rowdy, and the drink girls were omnipresent and generous, so it was a good time overall. And a nice break from the bone-chilling temperatures we’d been enjoying (?) in January. Now if only I had more than lint in my wallet when I got home...