My beloved ‘74 Norton Commando had spent the last couple of years just sitting in the garage, an unfortunate consequence of too much work, too little time, and a series of back problems. Finally I came to the conclusion that as much as I loved the bike, I was past the stage where hours crouched in a cafe racer riding position sitting on a cement-hard seat was in any way to be considered fun. In fact it was pure misery. So my choices were either to polish her up and place her in a position of honour in the living room, or sell her. 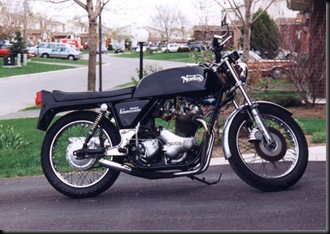 Plan A was immediately nixed by the spousal unit (very unreasonably, in my opinion) so it was on to Plan B.
The local Norton Owners Club is a very active group, and there are always folks looking to add to their collections, so I wasn’t too worried about finding a good home for her. Within a few days I was approached by a new member. We did some negotiating, and a deal was struck. As she wasn’t plated, I agreed to trailer her to her new owner after he got off work at 9 P.M. one evening.
So on the designated day I loaded her up and set off to the address provided. Which turned out to be a bank in one of the seedier parts of town. “This can’t be right,” I thought as I pulled up under a streetlight and the watchful gaze of a couple of hookers on the corner. As I was checking the address again the buyer came up to the truck’s window.
“You’re in the right place”, he said. “I’m the manager here. I just had to wait until the bank was closed.”
Apparently he hadn’t quite got up the courage to tell his wife that he had bought another motorcycle, and needed a place to store it until he could break the news.
So into the parking lot we went. And with the hookers looking on (they didn’t offer to help), we unloaded the bike and wheeled her in through the front doors of a closed bank, at 9:30 at night, after dark, past the teller’s counter, down the hall, and into the lunch room. I can only imagine what the staff thought when they came in the next day.
Why no one called the cops, I’ll never know, as I was half expecting them to come racing up, guns drawn (and hopefully not blazing) at any time. But fifteen minutes later we were done, Black Beauty was delivered, the bank was closed up again, and I was on my way with a nice wad of cash in my pocket.
I haven’t seen her since then, although I have it on good authority that he finally got up the nerve to tell his wife about her, and she’s now back on the road where she belongs, stretching her legs on the straights and swooping gracefully and effortlessly through the twisties. And I still miss her.