And the fun begins.

I decided to go with the 2 vintage Hondas. Of course neither was in my immediate neighbourhood so Saturday morning found me on the road to points west to pick up the S65 (the red one). An overnight stay in a cheap motel and then Sunday I picked up the C65, met up for lunch with an old high school friend I hadn't seen in 50 years, and headed back home, arriving at the same time as the latest April(!) snow storm. 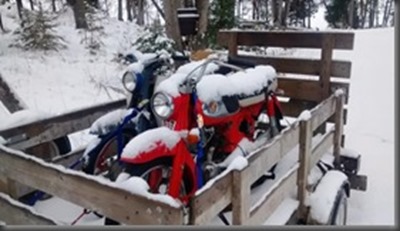 After unloading and getting the snow and slush mostly off, a more detailed inspection was in order. Unfortunately the little blue one, the C65, was in rougher shape than I expected, but to offset that the S65, was better than expected. So that’s the bike I’ll focus on first.

The idea I had was not to do 100% authentic frame up restorations but rather to build a couple of neat old bikes that will run well and be fun to ride.  Not only is it significantly cheaper that way but also easier as after market parts are more readily available. Having said that though, I will not be making any changes that cannot be undone if someone wants to take them back to original condition in the future. So there will be no chopping, cutting off of tabs, or other permanent modifications.

Before spending any significant amount of time and money on replacement parts, job 1 is to check the state of the power train. If the engine is toast I do have a couple of choices. Lifan is a Chinese company that makes bolt-in replacement motors for most of these old Hondas, so that’s one option. The other would be to part out the bike to others who need some quality frame and body components. I don’t like doing that to old bikes though as I’d much rather see them on the road. Fortunately I'm still a long way from making that decision.

Time to dig in. 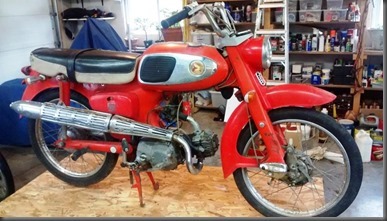