We just recently purchased a new vehicle, and with that vehicle came four new snow tires, already mounted on wheels to make the seasonal changeover a bit easier.

Today we had a rather balmy day for November and so I took the opportunity to put the snows on. (For those of you south of about the 45th parallel, ‘putting the snows on’ is a seasonal celebration that officially marks the change of season from mosquito-infested to ice-encrusted – and vice versa in the spring.) 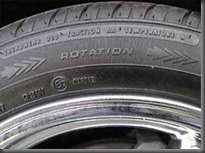 Everything was going well until I was bolting on the last wheel when I noticed some fine print on  the tire which said, Rotation, with an arrow pointing the wrong way. “Crap”, I said. Well, maybe not exactly “crap” but a similar sentiment was expressed. And sure enough, when I checked,  every.single.wheel was wrong. Left wheels were on the right and right wheels on the left. I had installed four wheels randomly and got all four wrong. No wonder I never win the lottery.

In my defense I don’t, in all the years of swapping summer and snow tires, ever remember coming across directional tires for a car. Motorcycle, sure, that’s normal, but not a car. I expect the worst that would happen is that they may not be quite as effective in the snow, but I changed them all again and now the arrows are all pointing in the right direction (forward).

And as I sit here with a cold beer as my reward, I am thinking it’s a good thing that I won’t have to spend the winter driving in reverse.