One of the reasons, among many, that I have been silent for a while is that the frau and I just spent 2 weeks in Germany. We escaped miserable spring weather here in Ontario and arrived in Frankfurt to sun and mid-20s temperatures, which stayed with us for the entire 2 weeks with the exception of 1 day of rain. And that was a driving day anyway, so nothing was lost.

The objective was to visit the “romantic Rhine” which is loosely described as the part of the Rhine between Frankfurt and Koblenz. Sloping hillsides covered with vineyards and spotted with medieval castles, it’s one of the more picturesque areas of Germany to visit, and we had wanted to do so for some time.

Of course we could have taken a river cruise, but for maximum flexibility we opted to drive. And as a result we saw more and got much further afield than we contemplated when initially planning the trip. 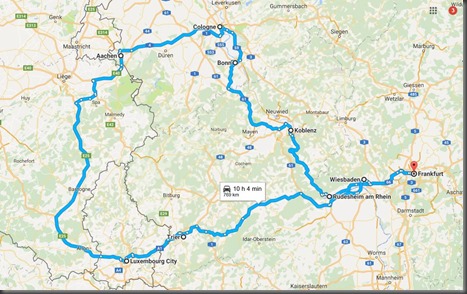 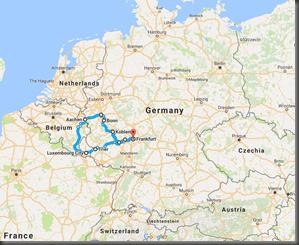 It’s hard to overstate how beautiful this part of the lower Rhine is. It’s in the heart of wine country so vineyards cover every surface, some on slopes so steep that maintenance can be done by hand only (and, as one local put it, by people with one leg shorter than the other). As a major trading route during medieval times it also attracted many of the great houses of the time which built castles on its banks to both control the flow of goods but also to extract tolls from anyone using the river for commerce. Now those castles spot the hillsides as ruins or, in some cases, have been renovated as inns (one of which we stayed in) and hostels. And visiting the villages built around those castles 1000 years or so ago, seeing still-occupied buildings that are 7 or 8 times older than our country is, is simply amazing. 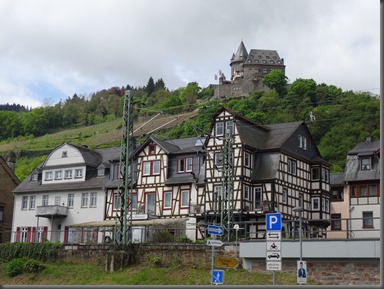 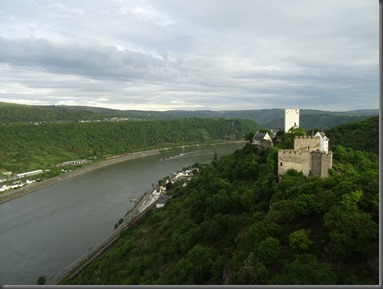 It’s impossible to cover all the key points of a two-week trip in one blog post, but I will touch on a few significant items which, hopefully, might encourage you to visit this area one day. It is well worth it.

One of the highlights for me was to visit Remagen of “The Bridge at Remagen” fame. Though the film was highly fictionalised seeing the actual location, the remnants of the bridge, and visiting the associated museum brought to life an aspect of WW 2 history that had long interested me. 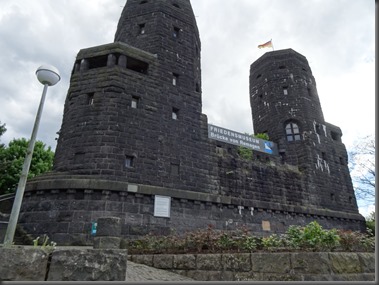 You can’t visit Europe without also visiting cathedrals. Of the dozen or so we saw, by far the most impressive was the cathedral in Cologne. According to Wikipedia the Cologne Cathedral is the most visited landmark in Germany, and with good reason – it’s beautiful. An added benefit is that you can climb the tower, if you’re up to 533 steps up – and 533 down – a spiral staircase that will make you dizzy if you proceed too quickly. Of course we decided to climb, and we did get dizzy, but the views were worth the effort. 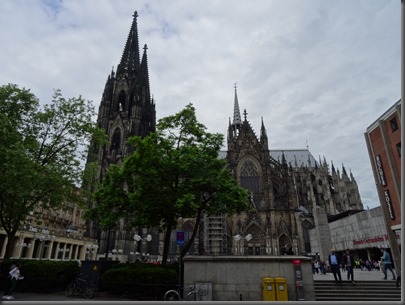 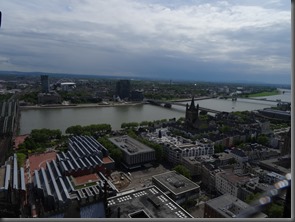 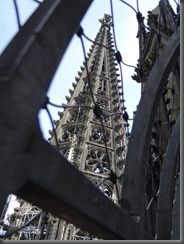 From Cologne we left the Rhine and headed west to Aachen. Back circa 800 AD Aachen was Charlemagne’s preferred place of residence and as a result the two names have become almost synonymous. That’s not a period in history that’s of particular interest to me but the missus found it fascinating. And, to be fair, I quite enjoyed poking around in some of the ancient buildings and looking at religious relics that, supposedly, contained the actual bones of Charlemagne. Of course, hundreds of years later who knows whether the relics are in fact a part of his cranium, or his forearm, but the believers believe. 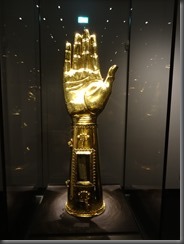 While in Aachen I was looking at a roadmap and, purely by accident, noticed that our route to Luxembourg passed close by the town of Bastogne. The name meant little to my traveling companion but Bastogne was the epicentre, more or less, of some of the bloodiest fighting in WW2, aka the Battle of the Bulge. So we had to stop. And I’m glad we did. The Mardasson Memorial at Bastogne is beautiful, and the museum is a fascinating place where one could easily spend hours and hours looking at the exhibits. 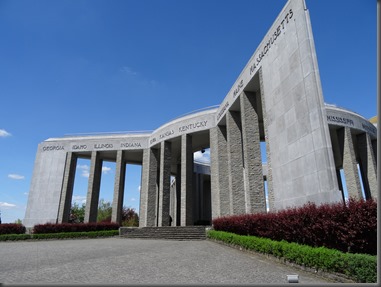 And as icing on the cake, we stayed in a little town near Bastogne called Hauffalize. Located in a small river valley this was probably the prettiest place we saw on the trip. It doesn’t get much more idyllic than this. 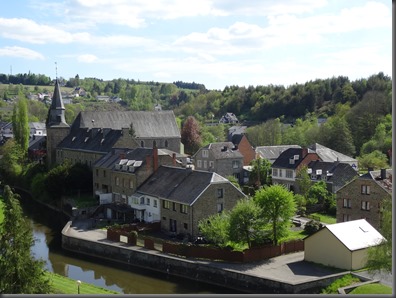 And then we were on the road again to Luxembourg City, a city of traffic jams, impatient drivers, and a million (at least) tourists. But, again, the historical aspects were fascinating and the scenery was incredible. Luxembourg City is one of the 3 official capitals of the European Union and dates back to circa 900 AD. Much of the city walls and fortifications were built during the 10th and 11th centuries, again giving one the sense of treading the ground where history was made. 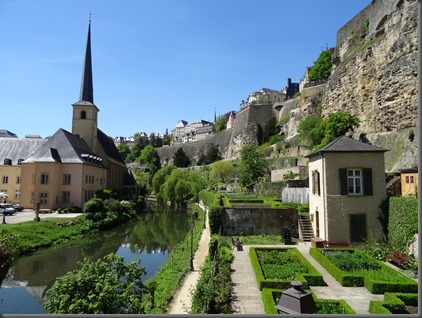 Next stop, Trier. Founded in the 4th century BC, Trier is probably the oldest city in Germany. Arguably, it’s most famous artifact is the Porta Nigra, the largest Roman city gate north of the Alps. Dating back to 200 AD the gate is still in remarkable condition, its name deriving from the darkened stone used in its construction. 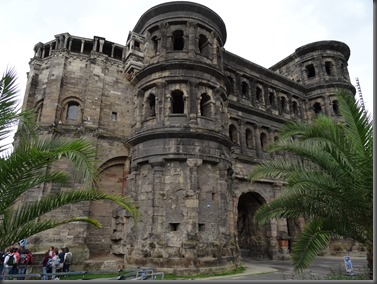 But to me the most impressive structure in Trier, and the one that left me most in awe on the entire trip, was the Basilica of Constantine. Built in 310 AD (complete with in-floor heating) as a Roman palace for Constantine, the building later became an Evangelical church, which it remains today. It comprises a massive single room, about 200’ long, 75’ wide, and 100’ high, imposing in its scale but also its simplicity. Standing in the centre of that room left me with a feeling I will not soon forget. It’s easy to see how a religious person might feel (as one did actually say to me there) God’s presence in such an edifice. 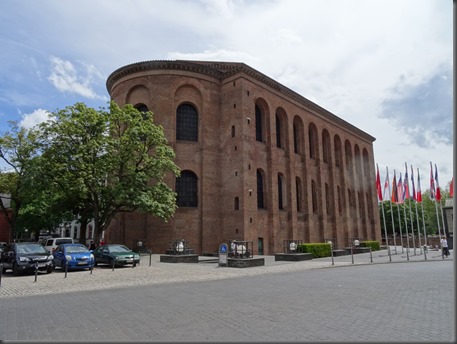 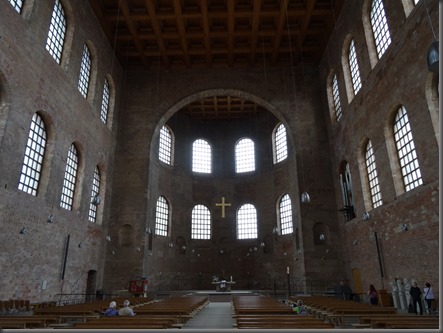 Last stop, back to Frankfurt for a few days. We wanted to see the city but also we were going to meet up with Sonja and Roland of  Find Me On The Road fame. I’m not going to post a lot of Frankfurt pictures but suffice it to say Frankfurt is booming (in no small part to the anticipated financial fallout from Brexit) and we had a great time, including a lovely afternoon spent with Roland and Sonja who drove in from their home a couple of hours away to spend some time with us. 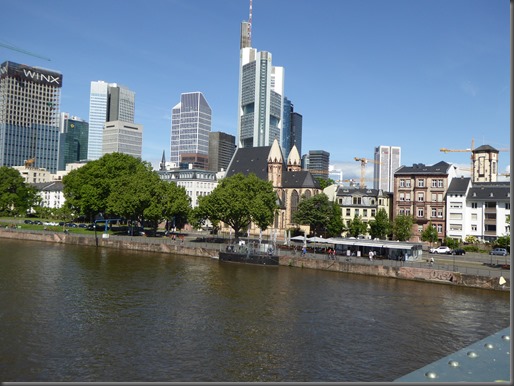 So that’s it, a (very) brief overview of a great trip.

By the numbers:
Auf wiedersehen Germany. Until next time.