There’s this annual event in the Missus’ family at which all the female members get together to bitch about their husbands, each other, and anything else that’s pissing them off at the time, hence the title “Crab Fest”. So for those gourmands out there who thought this post was about seafood, sorry. Males are not invited, except for the spouse of the host (moi) who refuses to give up his bed for any other woman.

So as an uninvited-but-you’re-stuck-with-me guest, my main function was to stay the hell out of the way and keep the wine cellar stocked, both of which I was very happy to do, the first for obvious reasons and the second because I managed to slip a couple of bottles of J-D into the order and no one was any the wiser.

But today I did manage to escape for a nice long ride – about 300 kilometres, or 200 miles worth.

Came across these fine folks out for a patriotic ride not too far from home. Clever use of old mufflers and exhaust pipes, but I’m not sure why they have tails. Monkey riders perhaps? 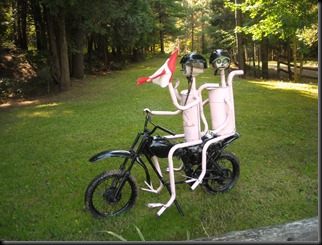 Crossed over to the Quebec side of the river on the Quyon ferry. 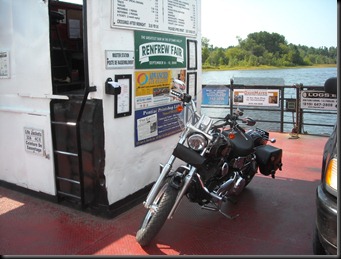 Had a nice rest stop all to myself on a high point of land rising above the valley farms below. Unfortunately the surrounding forest prevented any good scenic views. 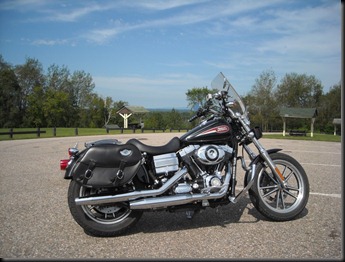 Came upon this covered bridge.  For those whose French isn’t up to par, the sign says it was built in 1898, is 497.3 feet in length, and is the longest covered bridge in the Province of Quebec. It doesn’t actually go anywhere, but I had to cross it anyway. Surprisingly, the wooden tracks were worse than any grated bridge I’ve ever been over for moving the front end around. And the trough in the middle of the two wheels tracks was about 8” deep – don’t want to go there. 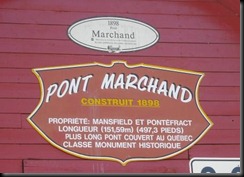 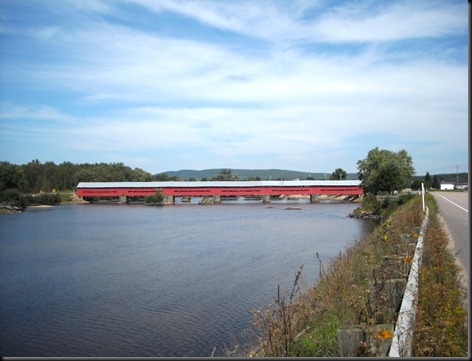 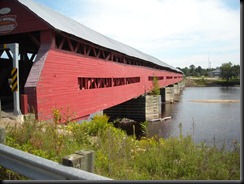 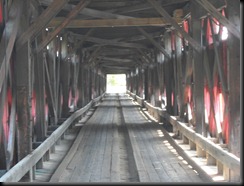 I made the acquaintance of Bud and Betsy, a couple of roadside hay bale characters  suitably accoutred for the upcoming local fiddle competition. According to the old fellow who put them together, he dresses them up in appropriate finery for Halloween and Christmas as well. May be worth another trip in a month or so. 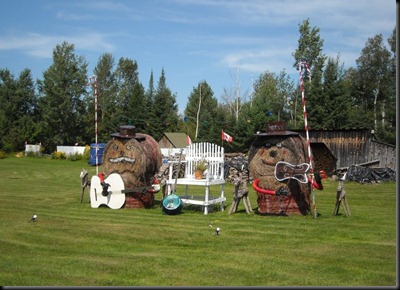 Last stop: Eganville, a small community on the Bonnechere River first settled almost 200 years ago as a lumber town. Now the centre of a tourist and cottage area. 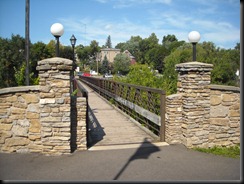 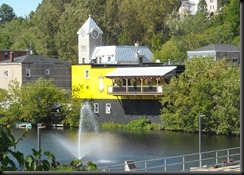 So to paraphrase the MasterCard ads: 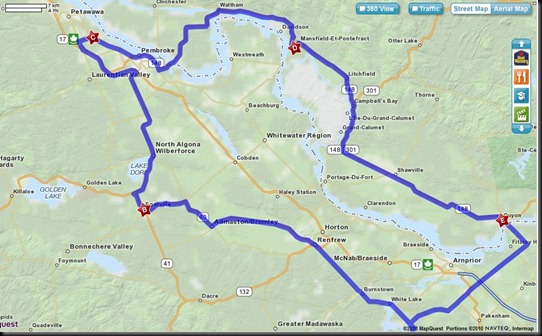