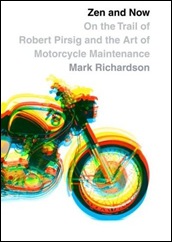 Zen and Now: On the Trail of Robert Pirsig and the Art of Motorcycle Maintenance is a road story with a twist.
From the cover liner:


“Richardson … was struck by [Zen and The Art’s] portrayal of Pirsig’s complex relationship with Chris and struck by the timelessness of its lessons.
So Richardson tuned up his old Suzuki dirt bike and became a “Pirsig pilgrim””.

Richardson neatly blends his own experiences on this trip with those of Pirsig some 36 years earlier. He follows the same route, visits the same places, and meets many of the same people that Pirsig encountered. And in the process comes to better understand himself, the Pirsigs, and Zen and the Art.
But Richardson takes it beyond a simple road story with his extensive research into the lives of the Pirsigs beyond what we learn in Zen and the Art. The murder of Chris in San Francisco, the marital breakup, the relationship with the other son, Tom, all combine to add an interesting third dimension to Zen and Now.
Bottom line: If you’re looking for something deeply philosophical, read Pirsig’s second book, Lila: An Inquiry into Morals. But if you want a book that will keep you turning the pages and perhaps trigger an impulse to become a Pirsig pilgrim yourself, Zen and Now is a worthwhile addition to your motorcycling library.

When walking, just walk.
When sitting, just sit.
Above all, don’t wobble.

Growing up in the fifties with four brothers and sisters and a single wage earner meant that money was pretty tight. And with credit cards being virtually unknown back then, wishes weren’t as readily met as they are today. In fact, we got “stuff” exactly three times a year: new clothes for school in September; toys on our birthdays; big ticket items like toboggans, wagons and bicycles at Christmas.

And we were fine with that, except it sometimes meant a long wait for the 10’ of snow on the ground to melt before you could take your Christmas present out for a ride. So then you’d spend the next 4 months sitting on your bicycle in the shed out back, checking every fifteen minutes to see if any more snow had melted since the last time you looked.

I’ve just put my new Tallboy seat on the Dyna and can’t wait to see if it feels as good after a couple of hours in the saddle as it does right now, sitting on it in the garage, looking out the window and wondering how long it will take for the snow to melt.

Nothing ever changes.
4 comments:

I have to admit I always thought sidecar racers were just a little bit unhinged – especially the “monkey”. That was before I saw sidecar motocross. Now I KNOW they’re unhinged.
Part motocross, part demolition derby, this sport seems to be unique to Europe so it’s unlikely many of us on this side of the pond will ever have a chance to spectate live. Too bad really, because it looks like it would be a hell of a way to spend a summer Sunday afternoon. 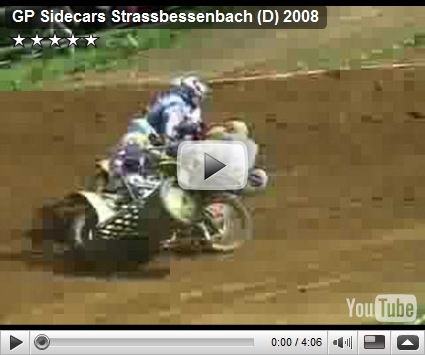 This is a great ad for the new HD Iron 883. It may not be the bike for every rider, but it seems to me they have hit the target demographic perfectly with this ad. I also really like the 60’s feel, right down to the plaid shirts, sneakers, and the classic 3/4 helmets.
I know if I was 20 and itching for my first Harley, I’d be lining up.

The latest gimmick? Or the ultimate toy?

“Here is something that will make you go out of your way to find curvy roads: the Carver One! You steer it like a car, but when cornering it banks like a motorcycle while you feel like you are flying a jetfighter. The thrill of this tilting capability combined with the handling of a sports car makes for an exhilarating driving experience unlike any other!”
Although it just came to my attention recently, the Carver One  has apparently been around for a couple of years already in Europe. And according to their web site, the company is working towards a fall 2009 launch in North America. (I can only imagine the regulatory hurdles they’ll have to go through on this side of the pond.) 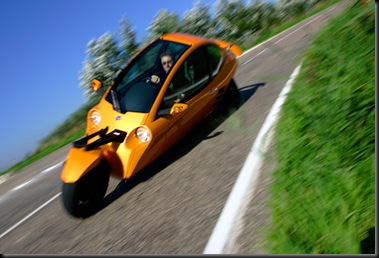 But hopefully they’ll get  the necessary approvals, line up distributors and dealers, and start hosting demo rides SOON.
Check out their videos and I’m sure you’ll be lining up too.
No comments:

Sometimes when riding it’s just not possible, or convenient, to pull off to the side of the road to take that great picture. So instead you commit it to memory or worse, fumble in your jacket pocket for your camera while driving highway speeds one-handed in an attempt to grab that once-in-a-lifetime scenic vista.
Well now there’s a handy and inexpensive solution out there to let you mount and keep your still or video camera at the ready while continuing to ride safely.

They’re called RAM mounts and they come with a variety of mounting options and interchangeable accessory holders including 1/4-20 camera mounts, cup holders, GPS holders, etc. The part that is semi-permanently mounted to the motorcycle is relatively small and innocuous, and the attachment mechanism for your camera is quick and easy to use so removing the camera for security reasons or to carry with you is not a problem.
And they are available in chrome!
If you want more info, check out Prairie Geomatics. The folks there will be happy to help you out.
P.S. The banner photo was taken using one of these mounts.
3 comments: