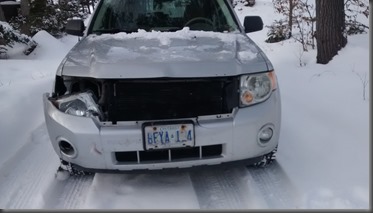 Yup, it’s 2017, whether I like it or not, and it’s time to check in since I haven’t posted in quite a while. I wish I could say I’ve been AWOL, spending the last month riding in some location that enjoys sunnier and warmer weather this time of year, but I can’t. I’ve been right here through every perverse cycle of snow, thaw, rain, snow, thaw, freezing rain, thaw, blizzard, rain, –30, +8 that have so far defined this as absolutely the worst winter in my memory. With conditions like these it’s nearly impossible to actually enjoy being out of doors so the best place to be is in the garage.

And that’s where I’ve mostly been.

The Hondas (remember them?) are proving to be a bigger challenge than I expected.

Both bikes were abused, but the S65 (the red one), which was the one I had the most hopes for, was both abused and involved in an accident. As I dig into them I’ve concluded I may only get one usable machine out of the two, but first I want to have a running engine before spending any time or money on body work. So I’m rebuilding one engine to S65 specs (the C65 is automatic). The cases have been reassembled and I managed to get one good top end out of cannibalizing the second engine for parts.  Now I just have to bolt it all together and see if it runs. If not it will be decision time – continue or part out what I have?

After getting the Kawasaki into the shop it didn’t take long to determine that at least part of the problem was a badly rebuilt carburetor. The throttle slide had been installed wrong causing it to jam the choke butterfly open. That, and a few assorted springs and o-rings that were missing from that rebuild, would likely have caused the poor running condition. It took a while to find carb kits but eventually eBay came through. Carbs have been rebuilt (properly this time with no left-over pieces) and the bike is now ready for a good tune-up, which can wait for warmer weather. Still not sure what I’ll do with it at that point.

And it’s not only been old motorcycles demanding my attention.

The lathe has been getting a workout since I acquired a few cords of good dry elm from a neighbour. I didn’t realise what a nice grain pattern it had until I started turning some of that firewood into small bowls and vases. It’s been fun to get back in touch with a machine that I’ve all but ignored for a few years, but the missus is now complaining about running out of space to display my creations.

And then I came across this ( https://www.youtube.com/watch?v=V9-ltPsbw9g) and got interested in 3-string guitars, and then, more specifically, 3-string cigar box guitars. I don’t play, but I do have access to lots of cigar boxes and a keen interest in the oddball, so I built one. It actually sounds amazing but I made a few mistakes and discovered some areas where it could be better so I now consider that to be the prototype. I have started on version 2 which will be similar but electric. Who knows, perhaps I’ll even learn to play a bit. I mean it’s only 3 strings, right? How hard can it be? And if I can’t figure out 3 strings there’s always the diddley bow. 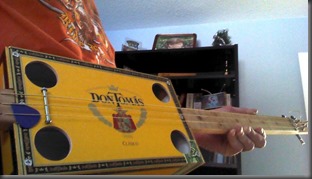 So I’ve been ignoring the weather as best I can as I suffer through another winter of PMS. But the days are already noticeably longer so spring can’t be too far away. Can it?
10 comments: