What’s in the box?

Before I had a chance to open the box, a distraction of a more mundane nature reared its ugly head. That’s right, work! So the box sat unopened, but never far from my mind, for a few days while I was otherwise occupied.
What is it about an unopened box that so intrigues and interests us? I knew what I’d ordered, and I assumed that’s what was in the box, but what if it wasn’t? What if they’d made a mistake and shipped a pair of riding boots that, just coincidentally, fit perfectly and looked great as well? Or worse, what if a critical component wasn’t in the box but backordered for delivery some time in August? What if… ? And so we let our imaginations wander, playing these little games, knowing that the only way to be really sure is to open the box.
But not knowing for sure also has an appeal. It’s like Christmas that way. Sure you could rip the wrapping off, tear open the package, and see what’s inside. But do you? Most people will feel the package, shake it, turn it over in their hands as if looking for a label that says, “It’s a pair of socks, dummy!”, even smell it. Of course few external inspections actually result in knowing the contents, but for a few seconds you let the anticipation enhance the experience, and then you shred the wrapping.
Which I finally did earlier this week, only to be slightly disappointed that the box contained exactly what I’d ordered - nothing more and nothing less than the new stainless cables and brake line along with sundry clips, gaskets, and washers for installation. 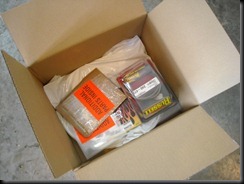 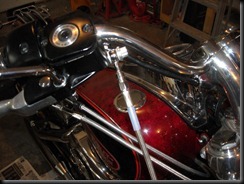 They are now installed, along with the stock bars that I put back on which also accomplished one of my New Years’ objectives.  But the diversion was short lived, and with lots of snow and ice still on the ground I now need to find something else to work on, or better yet, pick one of the many projects lined up that never seem to get started.
1 comment:

Some days, when the temperatures hover below freezing and the roads are covered with ice and snow that will persist for at least another two months, I feel like this: 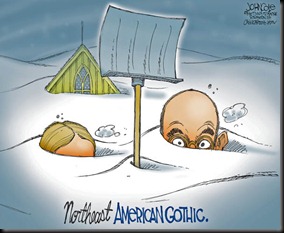 That’s when I need a diversion.
And, fortunately, one arrived today. 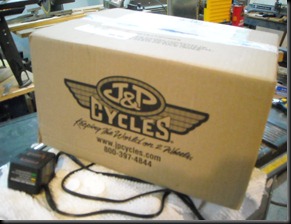 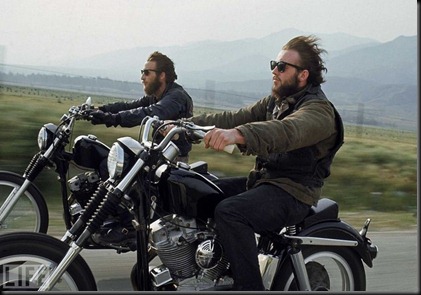 There’s something about the New Year that leads people to contemplate the year just ended and look forward to the next 366 days (2012 is a leap year). Sometimes it’s “Thank God that’s over!” but more often it’s just a recognition of another year come and gone with no major drama that affected our lives one way or the other.

By that measure, last year was a pretty good year up here in Canada’s hinterlands. I got the Dyna set up just the way I wanted it, we had great weather for riding and golfing (both of which I did far more of than in 2009), I took some interesting trips (none of which involved doctors, ambulances, or police cars), and generally kept the wolves at bay for another year.

The only real negative of 2011 was that the arrival of 2012 meant I was another year older. But then again, getting older is always preferable to the alternative.

So 2011 will be a tough act to follow, but in the spirit of News Year’s resolutions, I do have a few motorcycle-related objectives for the year.

I want to do a couple of bike trips this year – not just long day rides, but honest to goodness trips with a destination somewhere other than back home for dinner after 300 miles. I have no interest in the real long hauls, so riding to Sturgis is out (tempting though it may be), but there’s a Friday the 13th in July, so perhaps southern Ontario and Port Dover will be one destination. And I’ve been mulling over the Wharf Rat Rally in Digby, NS on Labour Day as well. It’s about 1,000 miles from here, so that would be a good 2-3 day ride each way through some really pretty country in eastern Quebec, northern Maine, New Brunswick and Nova Scotia.

And related to that, while the new flat bars on my bike gave me the look I wanted, some discomfort on long rides leads me to believe they’re not ergonomically right for me. So there will be some changes in that department over the winter, possibly reverting back to stock.  Other than that I’m really happy with the setup and appearance of the bike, so any further changes will be limited to possibly a few farkles.

I want to either learn how to properly use my GoPro camera, or sell it. I’ve had it for quite a while now and have yet to really enjoy it. Although I have learned a lot about the GoPro from fellow bloggers who have mastered the device, I have not yet been able to successfully put those lessons into practice and as a result I am still not very happy with the results. So I need to invest some serious time and then decide on its fate once and for all.

And finally, I need to clear out some bike inventory. It’s time to get rid of the XL500, the FT500 and the TL125 and the various and sundry boxes of parts, manuals, spare tanks and frames, etc. None are being ridden enough to justify keeping them, and certainly not enough to warrant the exorbitant cost of insurance up here. Besides, a bit of spare cash might allow me to acquire another project bike for next winter.

So that’s it. As the saying goes, “God willing and the Creek don’t rise”, 2012 is looking to be another pretty good year for me and, I hope, for all of you as well.
8 comments: