All I want for Christmas is … camo?

Just recently a new Cabela’s opened up in Ottawa. For anyone not in the know, Cabela’s is essentially a big-box store selling everything any hunter, fisherman, or general outdoorsman (and the female variants of same) could ever want. And most of it is in camouflage so that, one assumes, if you ever put it down in the woods you’d never find it again and so would have to purchase a replacement – at Cabela’s of course.

Which brings me, in a rather roundabout way, to this conversation over-heard at a local Timmies.

Guy 1. Have you been to the new Cabela’s yet?

Guy 2. No, but they’ve got their pre-Christmas sales on right now so maybe I’ll stop by and pick up some camo underwear for the girlfriend for Christmas.

Guy 1. It better be for your girlfriend; your wife would shoot you if you ever gave her something like that. 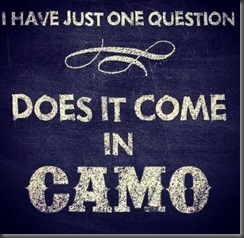