A few years ago I happened to be in the Daytona area during Bike Week and so got to spend a day wandering around town, freezing my ass off as I recall because it was one of the coldest Bike Weeks ever. But I did decide that I would, one day, return on two wheels and really get to experience the event properly. Unfortunately it’s not in the cards for me this year, but I expect some of my followers will be heading south soon to escape the winter’s cold blast (especially this year) and enjoy some of that Florida heat and hospitality. So when Kiara Wilson of Motorcycle House asked if she could do a guest post about Bike Week I thought it might be of interest. Here it is.
Daytona Beach Bike Week on Two Wheels
With Daytona Beach Bike Week fast approaching residents and officials of the sunny Florida beach town are bracing themselves for the annual event. With over 500,000 attendees Daytona Bike Week is considered the largest motorcycle event in the US and is the go-to event for riders on the East Coast. Comparable to Sturgis, Daytona Beach Bike Week is a once in a lifetime trip for those who enjoy motorcycles. They welcome riders of every kind and have an entire week of events set up. Whether you’re a cruiser rider, sport bike rider, or adventure touring rider there is something for you at this event. 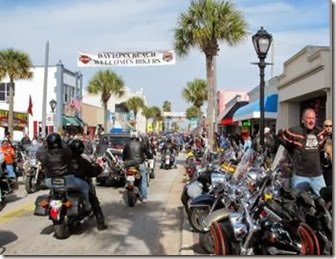 The event itself has been going on since 1937 when it started to promote the Daytona 200 race. However, in the 60+ years since it has become the world’s largest motorcycle event, filled with all sorts of various motorcycle activities. Whether you’re looking to socialize, bar hop, check out bikes, or attend the Daytona 200 race, there are plenty of things to do to keep you busy. The event has dozens of corporate sponsors, so there are also plenty of contests and prizes to be won. Daytona Beach is a unique beach where they allow you to ride your bike on the sand and enjoy the Florida sun. You can enjoy hanging out on the beach with fellow bikers and you never know what celebrity or eye candy you might see on the beach. Check out the International Motorcycle Show or watch the AMA stunting contest, but be sure to find time to enjoy a beer in the warm Florida weather.
However, it’s not all sunny. Motorcycle deaths, thefts and other problems plague the event year after year. Things have significantly improved over the years; however here are some tips for those who will be attending the event. There were 15 deaths last year, 5 of them were accidents involving alcohol. Almost 30 bikes were stolen at the event and 28 were recovered.
So here are our 3 tips for staying safe at Daytona Beach Bike Week.

Soon after I got my Dyna I realised that if I wanted to use it for anything practical I needed some luggage capacity. So I went looking for bags, scouring the parts catalogues, eBay, Kijiji, and anywhere else I might be able to find something suitable and priced right (i.e. less than retail). And I did, finally.
Then, years later, after tiring of having to empty the bags every time I stopped somewhere overnight, I thought how nice it would be to have some sort of quick-detach system so I could just pop them off and carry them into the hotel room with me.
And so when the folks over at Viking Bags asked me to do a review of their quick disconnect system this winter it was a no-brainer. Of course I’d try them out. A couple of weeks later the box arrived.
First impressions: The brackets are solid, heavy-gauge steel and seem very well constructed and nicely finished. A large collection of various sized nuts, bolts, spacers, etc. is also included, as is a brief installation instruction sheet. 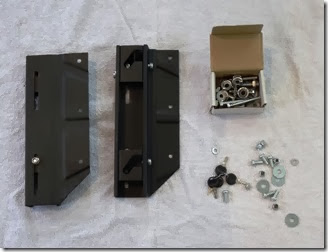 Before starting any project I make it a habit of running through the process mentally, thereby (hopefully) anticipating problems before they 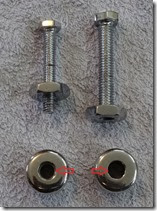 arise. When I did so in this case I discovered an interesting issue: the 4 docking posts had 2 different sized bolts and inside (bolt-hole) diameters, one at 3/8” and the other at 5/16”. There is no technical reason for this  so I contacted the company directly to ask why but they were unable to explain the rationale. It simply creates confusion (which part goes where?) and requires additional tools for the installation. Viking Bags offered to send replacement parts to match but I declined, instead going with the ‘standard’ product as that’s what you would get.
After staring at the pile of parts for a few days I was finally satisfied that I knew what I was doing. The installation then went very quickly although the first time I installed the docking posts backwards. That was my bad for relying on intuition (not always a smart idea). The instructions specify that the docking posts have to mount with the smaller diameter end facing out. This is somewhat counter-intuitive as it is the larger diameter end

that is better finished with rounded edges, etc., and so one would expect that would be the outer, visible face. Not so, as I discovered. However that was easy to fix and by using the longer bolts provided I was also able to retain my existing QD backrest. Having stacked docking posts does mean that the pins are a bit long and obvious with nothing attached, however that won’t often be the case so I can live with that for the added convenience.
Likewise mounting the H-D bags to the brackets was very easy. The main mounting holes in the brackets lined up perfectly with the existing holes in the bags so I only had to drill one additional hole in each bag. Unfortunately the bolts provided were a 1/2” too short for the reinforced mounts on my H-D bags (probably not an issue with most after-market bags), but once I got the right length bolts it really was a simple bolt-on effort. 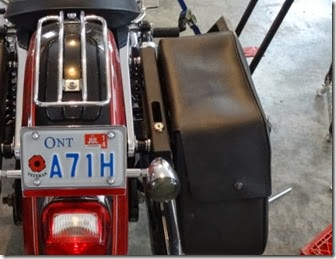 A turn of the key and the bags slide on and off effortlessly.  The lock is designed in such a way that you cannot accidentally leave it unlocked – the key won’t come out if you do – so they should be very secure. The mounts seem good and solid and only time will tell how they hold up with loaded bags, but I don’t anticipate that to be an issue as they are quite robust. And even though I’ll probably keep the bags mounted most of the time, it will be nice to be able to snap them off, even if just for basic maintenance and a quick wash now and then.

But, (and this is really a nit-picky point) the two locks require different keys. Having them keyed the same so one could avoid having to carry yet another key on an already overloaded key chain would be a really nice feature. And finally, a small piece of plastic to cover the adjustable lock slot visible in the picture above would go a long way to improve the overall appearance. But those are minor issues, largely offset by the fact that these units are currently selling at a significant discount to their competitors.
What is the final verdict? Overall I am quite pleased with these mounts and would recommend anyone considering detachable luggage give them a try.
If I could suggest one final improvement it would be for Viking Bags to offer a strap handle to which you could clip the bags for carrying, like a suitcase. Or make the docking posts available as a separate purchasable item so one could make their own handle, or put mounting posts on the garage wall to store the bags when not in use, or even use the bags on multiple bikes. Do that and these would be perfect!
8 comments: