My edumacation wern’t to good.

Okay, I know I’m a pedant when it comes to basic grammar, spelling, and punctuation but recently it seems that the race to the bottom is accelerating. Either that or internet bloggers and commenters have, of recent, become emulators of James Joyce’s Ulysses in style and structure. Then again, perhaps not; Joyce could at least spell. (Modern variant: “Joyce cud at leest spel.”)

I can appreciate that English can be difficult for newcomers to learn and master, but when your name is Joe Smith and you hail from Pittsburgh (or Tampa, or Toronto), I expect it’s your first language that you are butchering, not your second.

Now some would argue that if “people understand what I mean” anyway why does it matter? Or the claim is made that languages evolve over time, new words get added, old words get dropped, and punctuation standards change (vis current discussions over the use of the Oxford comma) so this is just a natural evolution, possibly hastened by the need to compress ideas into 140 characters or less, entered on a very tiny smartphone keyboard/pad. That’s true, to a degree, but the proper use of any language offers a precision to our communications that is too easily lost when it strays too far from its normative path.

There is no shortage of internet memes that use humour to illustrate the misunderstandings that are possible when basic linguistic rules aren’t followed, but there are also more serious consequences.

Julia Layton expresses the importance of spelling in How Stuff Works: “As adults, our spelling affects the perception of our intelligence and credibility (emphasis mine). Fair or not, many people in the professional world are going to toss that resume aside without even finding out what your child's "job experiance" entails. To people looking to hire someone smart and detail-oriented, to people reading and grading college essays, to people deciding whether or not to take a serious blog post seriously, spelling counts.”

And nowhere is the precision of language more critical than in the law, a perfect example being this case where millions of dollars hinge on a single comma. http://www.cbc.ca/news/business/comma-lawsuit-dairy-truckers-1.4034234

Finally there is simply the matter of pride. Why would you want to present yourself to the world as a person who is barely literate?

Unless, of course, you are.

And according to some surveys, Canada offers no beacon of hope when it comes to basic literacy either, with “Four out of ten Canadian adults have[ing] literacy skills too low to be fully competent in most jobs in our modern economy.”

When graduates of the education systems of two of the richest countries in the world produce rubbish like the lead-in quote it’s no wonder the west is losing its global competitive advantage at such a stunning rate. It is depressing in the extreme.
10 comments:

In my defense, I was left unsupervised.

Although I wish it was so I can’t claim credit for this quotation; I saw it on a tee-shirt and have appropriated it for this post (and to be used as a future motto).

I imagine the “left unsupervised” defense would get little traction in a proper court of law, but in most motorcycle households I expect it is frequently utilized, with varying degrees of success. 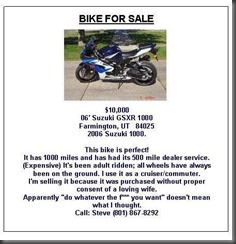 And this is where having a loving and understanding spouse/partner comes in, or at least an iron-clad pre-nuptial agreement that recognizes one party’s two-wheeled compulsion as being paramount, not to be superseded by any amount of eye-rolling, teeth-sucking, yelling, or tears. This understanding is important because we can’t be supervised 7/24, the internet is always on, and the temptations are just too many.

Now just to be clear, I am not speaking from personal experience here, having both a loving and understanding (usually) spouse and a pretty solid, if verbal, pre-nup agreement. But even with all that there is still an understanding gap when it comes to all things motorcycle.  For example, if I had $10K burning a hole in my pocket I’d be at the dealership seeing what I could get for it. The spousal unit? She’d be booking a vacation trip to some far-off land with lots of historical sites (or rubble piles as I prefer to call them). See what I mean? A gap.

But, on occasion, the gap gets closed and we both get what we want. In an unsupervised moment a few weeks ago I was browsing the interwebz and came across a pristine 2014 Road King. After several emails and photos were exchanged (the dealership is 5 hours away) I was convinced. A brief family discussion later (See? Understanding!) and a deposit check was on its way.

And that’s how I ended up with my new-to-me Road King last week… while the missus plans our trip to Europe in May. 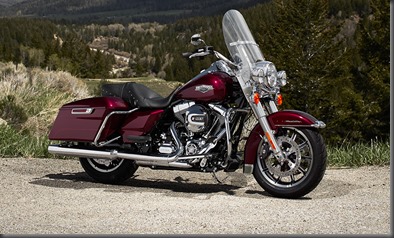 In one of the Facebook groups I follow a member posed this question: “Anyone tried a car tire on the rear of their bike...lots of info on you tube...just wondering?” 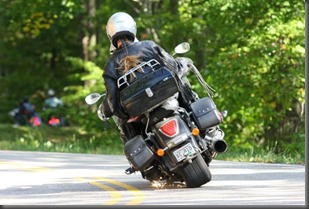 Well that question started a flame war of the like not seen since the PC-MAC conflagrations of the last century. Aside from sidecar rigs (Petunia over at Arizona Adventure Dude, for example) which often sport automobile tires, I’d never heard of anyone putting them on a regular, two-wheeled, motorcycle. Until now. And to say there are advocates for this would be an understatement. The car tire disciples are many, they are vocal, and they even have a name for themselves – Darksiders.

As with many things on the interwebz, there are many opinions but very little solid evidence one way or the other. Some positions make a certain amount of sense (http://www.roadandtrack.com/car-culture/a8606/why-so-called-darksiders-prefer-auto-tires-on-their-motorcycles/) while others rely simply on the passion of their arguments to make their case.

As a lay person with no practical experience other than 40++ years of riding, I find the very idea of putting what is essentially a flat-profiled tire on a vehicle intended to lean to be disconcerting, if not downright frightening. Tire design is not rocket science, but it is complex. Different vehicle types impose different loading factors and forces that determine a tire’s characteristics such as sidewall flex, compound hardness, profile, and so on. So to take a tire designed for one set of conditions and stake your life on it functioning properly under a completely different set of conditions strikes me as idiotic in the extreme.

UPDATE: For anyone who really wants to get into the minutiae of this topic, here's a great link: http://www.goldwingfacts.com/forums/10-reference-faq-forum/400426-design-differences-between-car-motorcycle-rim-tire.html.
13 comments:

And we have liftoff….

The space analogy may not be overly apt, but it did take me about as much time to get this little engine running as it took the US to put a man on the moon, so I’ll let it stand.

After a year spent on eBay searches (and purchases), joining countless special interest Facebook groups, and lurking on a plethora of other interweb sites, it finally all came together. And what a glorious sound it was.


So now it’s on to the frame. The first challenge will be to come up with a way that it can be straightened, or at least untwisted enough so it will get past a safety check (i.e close enough for government work). Eyeballing it it looks like the steering head is about 5 degrees off vertical, and it's a stamped steel frame, so I'm open to suggestions.

I Got The I Wanna New Motorsickle Blues

I got the I wanna
New motorsickle blues,
I wish that all I had
To do was choose.
But nothin’s quite so easy
With the Missus actin’ nasty
And sayin’ if you do yer gonna lose.

Oh lawd, I got the I wanna
New motorsickle blues….

Played to a slow Mississippi delta beat with a slide guitar accompaniment. I think it would be a big hit amongst those of us still frozen in and waiting for that annual rite of spring, the first ride of a new year.

One of the problems with being locked up (so to speak) for 5 or 6 months of the year is it gives one time to think, to think about rides past and future, and bikes past and future. But it’s the latter that tends to get one into the most trouble. Right about now all the bike mags on the newsstands (or delivered right to your door) are covering the new 2017 models. And they are fine looking models indeed, designed to cater to every riding style and every dream, reasonable or otherwise. Want a 200-hp crotch rocket so you can wheelie be an idiot? Got ya covered. An adventure tourer so you can cross the Sahara (like that’s going to happen)? No problem. Or how about a geezer-glide so you can muscle 900 pounds of comfortable seating for your wrinkled old cheeks over to Timmie’s for a coffee? Got that too.

Yep there’s lots of shiny new stuff out there just waiting for us PMS sufferers to come to the conclusion that the best way to deal with Parked Motorcycle Syndrome is to dream of buying a new bike. They say that spring is a time of renewal, of change, so what better way to celebrate? And it doesn’t have to be new new, just new to me is often enough to satisfy the urge. 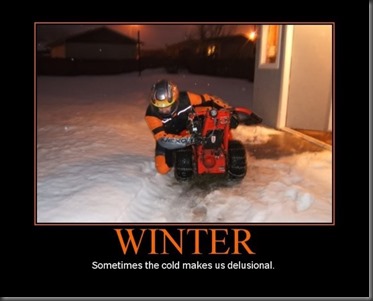