If you recognise that quote you are definitely dating yourself – as am I by using it.

That’s the state we are currently in, one of patience, as winter slowly eases her frigid grasp and spring/summer riding conditions approach.

One of the projects this winter was to upgrade the Kawasaki a bit so it was a little more presentable and reliable. That project is now mostly wrapped up and I am anxious to get it on the road as soon as the last of the ice is gone and the sand and salt have been washed away. Shouldn’t be more than a couple of weeks now.

Here are before and after pics for comparison. 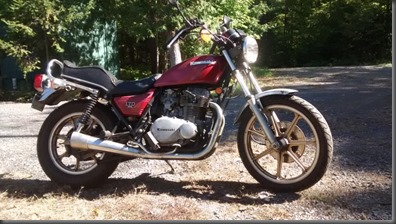 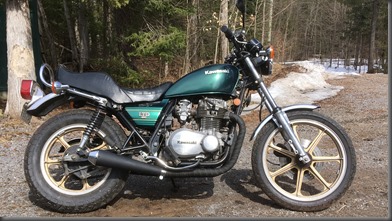 What did you drive to work today?

I came across this photo on the interwebz. I just had to share as it perfectly captures the difficult choices we face every day in the spring. Do I take the car today? The sled? The bike? 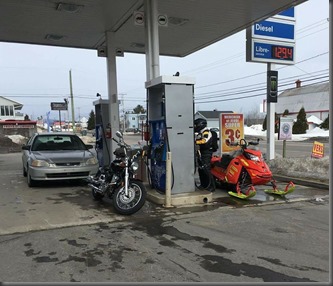 Today is the first day of spring. Which has absolutely nothing to do with the weather but is simply a recognition that the earth has tilted back towards vertical enough that the sun is now directly over the equator and, so, the time between sunup and sundown is exactly 12 hours everywhere on earth. (Of course science has refined these definitions such that this common understanding is approximate only. Still, it’s good enough for government work, as they say.) 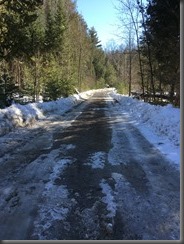 We’re not out riding just yet though, except for the few diehards who refuse to be daunted by below freezing temperatures and icy, sandy, salty roads. Like the fellow I saw today carefully negotiating a pot-holed, puddled, street on his full dresser. As well, our lane remains an icy, muddy mess, virtually impassable by two wheels, so I’m not going anywhere soon.

Still, the sense that weather-spring is on the way is palpable. One can feel the heat of the sun. The snow banks inch back a little more each day. The forest critters are becoming much more active and aggressive as they seek out mates and chase away the competition. And summer birds are starting to reappear at the feeders. All evidence that old man winter is on his last legs, for another few months, at least.

It all lends an air of lightness to the soul that almost makes the long, dark winter experience worthwhile.
4 comments:

After a relatively balmy February that saw most of the snow disappear and hopes soar for an early start to the riding and golfing seasons, came March. I’m reminded of the Peanuts cartoon meme that had Lucy always pulling the football away just as Charlie Brown was about to kick it. You would think we’d learn. Sigh… 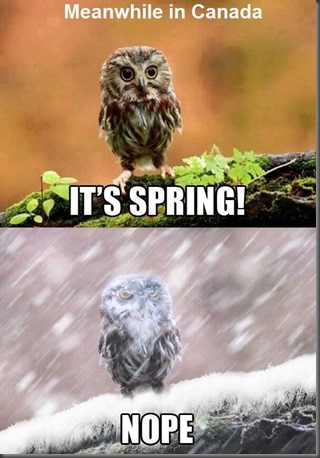