They came, they saw….

… and - whoosh! - they were gone, continuing their whirlwind tour of Eastern Ontario.
I had the pleasure of being host and tour guide for Roland and Sonja while they spent a couple of days in the Nation’s Capitol as part of their Blogger to Blogger Tour 2015. 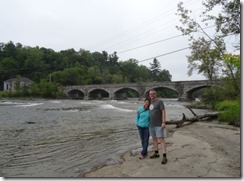 En route we first had to stop so they could dip their feet (figuratively) in the Mississippi River where it flows under the 5-span stone bridge in Pakenham. Mission accomplished, it was on to Ottawa for the rest of the day.

Clearly you can only scratch the surface of a city of 750,000 people in one day, but we gave it a shot. We visited all the obligatory sites – the Market, Parliament Hill, the Rideau Canal, and the National War Memorial where a couple of reservists proudly guarded the Tomb of the Unknown Soldier, this after a guard was brutally murdered there last fall. And we visited a wonderful, but little known, rock balancing artist, John Felice Ceprano (that genre is, apparently, a ‘thing’, with an international community of rock balancing artists that have conventions and competitions) and his work at Remic Rapids on the Ottawa River. 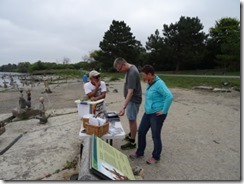 Of course the tour also included a great lunch at a new-to-me Vietnamese Restaurant in the Market and a post-tour beer at an also-new-to-me Bier Markt on the Sparks Street Mall. (link)

All in all a great day with great company.
15 comments: