Be careful what you wish for

This area is generally a high user of road salt during the winter months, but around the lake the local authorities have decided to use sand only to reduce the amount of salt running into the lake every spring. The difference in winter driving conditions is negligible and it’s healthier for the environment as well, so what’s not to like?
Well, the sand.
When the last of the ice and snow finally disappears, our roadways are covered in sand. Bad enough on 4 wheels, it can be disastrous to hit loose sand mid-curve while on 2 wheels. Being a poor township there are no sweepers to clean the roads, so we have to rely on a few heavy spring rainstorms to wash the sand off and make the roads once again safe for riding.

So it was about a month ago when I foolishly commented that what we needed was some rain for that exact purpose. Now I don’t personally believe in a higher being, but someone or something “up there” decided, “You want rain? I’ll give you rain.”
And so it started raining at the end of March… and it’s still raining. By tomorrow we will have surpassed the all time record for rain in April – with more rain forecast right through to the first week of May.
Okay. I get it . You made your point. I’m waterlogged. The golf course is waterlogged. The toys want to come out and play. So stop the #*@*^# rain already!
6 comments:

We’re in the midst of a federal election up here where the megalomaniacal, anti-democratic leader of the Conservative Party is likely to win another mandate with about 35% of the votes. Unlike the two party system in the US we have a total of 5 parties vying for support, so the splits let one party ‘win’ even though as much as 70% of the population don’t support them. On the plus side we have no hanging chads as we still use paper ballots.

So for most of us whose interest in politics goes beyond responding to superficial prime time attack ads this is all very stressful. We know the best interests of Canada and most Canadians are not going to be met by the party on track to win, but there’s precious little we can do about it under our anachronistic first-past-the-post voting rules.

That’s why I needed a diversion.

And that’s why I hung the bicycle in the trees. 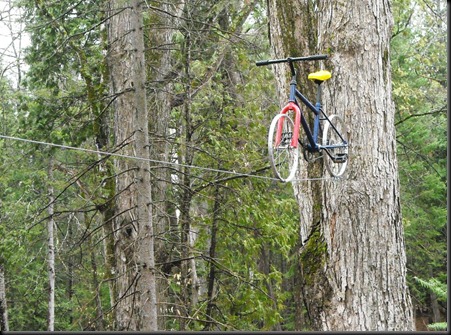 An open letter to the people of Boston

We just got back from a very enjoyable visit to your fair city. From Marathon Monday through to Thursday we experienced your burg and did the marathon (spousal unit only) and tourist thing, enjoyed the sights, the history, and the pubs, all the while keeping an eye out for those missing R’s. (I knew it was time to leave when I was beginning to sound like a  local: “Is theah a place heah wheah ah can pak mah cah?”)
Unfortunately, except for Marathon Monday, the weather was terrible, but you can’t be held at fault for that – even the combined intellects of the 287,361 university and college professors who live in and around Boston isn’t enough to control the weather. Nor predict it, as each day was a fresh surprise.
But I do have a couple of observations and suggestions related to your driving habits.
When you took delivery of your new Volvo, the sales rep probably pointed out that lever just to the left of the steering wheel. That is a turn signal activating lever, intended to be used to advise other drivers and pedestrians of your intent to change directions. It is NOT a handy hook for your man purse.
Second point, once accidentally activated by placing your man purse on the lever, it is customary practice to remove said purse and cancel the flashing signal light before the fourth intersection in which everyone around you expected you to turn left, only to be disappointed and surprised when you drove straight through that red light.
Red lights. In most jurisdictions with which I am familiar, the approved signal for accelerating (i.e. “flooring it”) when approaching an intersection is a yellow light, usually a stale yellow, but definitely not red. I’m sure you can appreciate that if red didn’t mean STOP then there would have to be another colour for that, and I’m also reasonably sure your signal lights didn’t offer a 4th option. So try to stop on a red light; the life you save may be mine.
And one last item. When you pull out in front of another driver in a 40-mph zone, causing that driver to smoke his tires to avoid an overly intimate encounter, it is customary to get up to speed quickly and not take 3 blocks to do so. I know you are environmentally conscious, but trying to save gas by letting your Mercedes idle up to 40 mph just doesn’t work. German engineering is not THAT good.
So in my personal (and very unofficial) ranking of North American drivers, Boston has now surpassed both Toronto and Montreal for the worst drivers honour. Whereas Toronto drivers are totally unpredictable and Montreal drivers are overly aggressive, Boston drivers combine both traits, being simultaneously aggressive and unpredictable. Obviously a source of pride to some, it’s also a dangerous combination.
10 comments:

ABCD – May 1st – Mark it on your calendars now

A Bloggers Centerline Day, or ABCD, will take place on Sunday 1st May 2011.

The plan is to inspire as many bloggers as possible to go outside and take a photograph of themselves on this day, wherever they are in the world. The photo can be creative, arty, contain more than one person, be in any type of location and can contain anything else you like. It must however contain the centerline of a road and at least part of you, the blogger.

Rule 2 - the picture must be of yourself, and you must be a person that publishes a blog. You can include whatever else you like in the picture, including other people if you wish.

Rule 3 - the picture must include the centerline of a road.

Rule 4 – you should publish the picture on your blog on 1st May 2011, along with a few words about the picture and why you chose that location or pose.

Rule 5 - when you have posted the picture on your own blog, put a comment on http://garysusatour.blogspot.com/2011/04/abcd-will-you-take-part.html and include in that comment the address of your own blog post containing your own picture.

Gary France will then pick his favourite photos and publish these as being the winners. There will be a prize of $100 awarded to the overall single winner, as chosen by Gary.
In order to get this event known as widely as possible, please copy and paste this posting onto your own blog, including the title. Please do that today!

As a reminder to yourself to take the photo and post it, put an entry into your diary for 1st May 2011.
2 comments:

Road test and first ride of the year

It took a few weeks, but the weather finally cooperated (no rain and 45 degrees) so I got to road test the Ascot. And it runs like a charm after the repair, even if I do say so myself.
It’s been a late and cold spring here (even now they’re calling for the possibility of snow on the weekend), but the lake is now free of ice and the spring flowers are just starting to peek above the ground. Our private road is finally clear of snow and spring mud (most of it is in shade all day long, so it takes a while to thaw and then dry out) so that a ride, even to the mailbox, doesn’t mean a 2-hour clean-up when you get home.
So when I got a notice today from the post office that a package was waiting for me it seemed like a perfect opportunity to don the leathers and helmet and go pick it up on two wheels, which I did. And did it ever feel good. There’s still lots of winter sand in some corners, and the skills are a bit rusty, but that will change quickly. And by the time we’re back from Boston (the missus is running the marathon next week) we’ll be back into riding season with a vengeance. Woohoo! 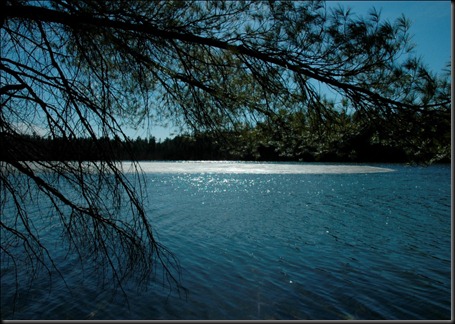 The last bit of ice. 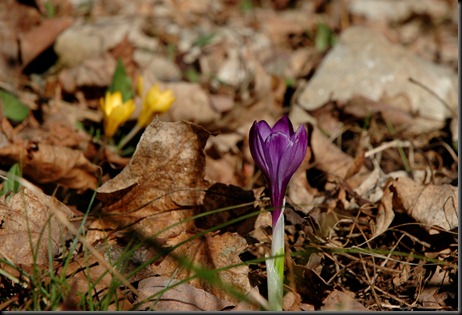 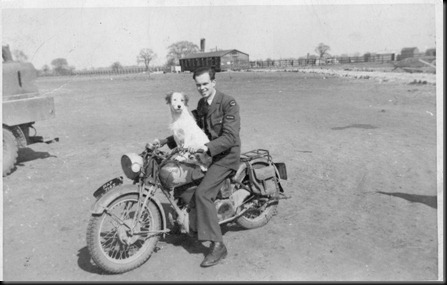 If any of my readers happens to have a familiarity with WWII vintage British motorcycles I’d sure be interested in knowing what he is riding. I would hazard a guess that it’s likely a BSA single, but that’s all it is, a guess.
4 comments: