Well that explains it.

Way back in April (http://ontwowheels-eh.blogspot.com/2019/04/three-steps-back.html) I posted about a final drive issue with the Kawasaki motor I’m currently working on. I removed the engine (lots of twisting, wiggling, and cursing involved – along with a beer or two) but then it sat on my bench for a long time whilst other priorities took precedence. I finally got back to it the other day.

With the crankcase removed the problem became evident. One of the cages in the caged bearing had split and the balls were loose in the race. It’s not clear to me how long it had been like that but fortunately it seems the only damage was to the oil seal which was torn by the broken cage. Everything else in there looks good. 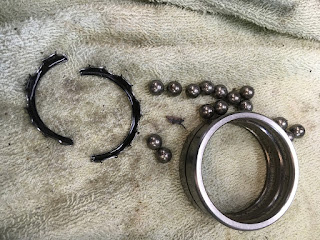 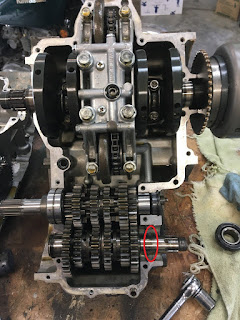 So now, with a new bearing and oil seal on order, it still sits on the bench until I can start reassembly – hopefully in a couple of weeks.
2 comments:

Between the weather (which has sucked!) and other obligations (far too many!) there wasn’t a lot of riding happening here this spring. Today made up for it.

The stars finally aligned in that I had a whole afternoon with nothing critical to do, and good weather. So I got to go for a nice, long (310 km) ride. 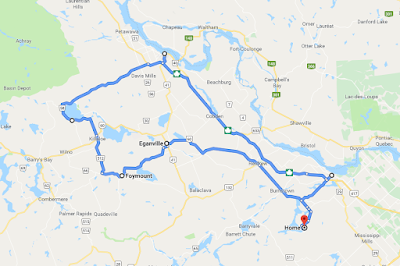 I didn’t have a destination in mind, only that I’d head up towards Eganville and follow my nose from there. When I stopped for a break and checked my map I realised Foymount was just down the road a piece. My brother will recognise these pics as he was stationed at CFS Foymount before the base was closed and sold off in 1974. There are people living and working there still, but the base itself is pretty decrepit, not at all the well-manicured CF base I recall from many years ago when I was stationed just down the road at CFB Petawawa and would sometimes visit. But the sign was nice! 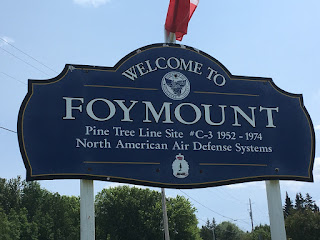 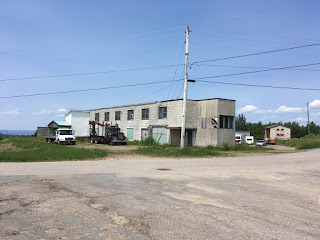 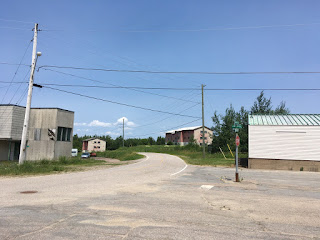 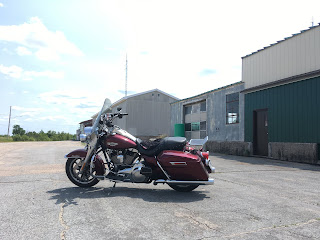 From there I headed north, through Killaloe and up around Round Lake towards Pembroke. Just outside Alice I came across this sign, familiar to all Valley Heritage Radio listeners. “We don’t do windows and we don’t do doors” says their ad.

Of course I had to stop for a pic to prove I was there. But I didn’t buy anything, especially no windows or doors.

With a few short exceptions the roads were in great shape with practically no traffic, so 110-120 in an 80 zone was no problem. Just a great day of riding.

Then I came to this at roadside. 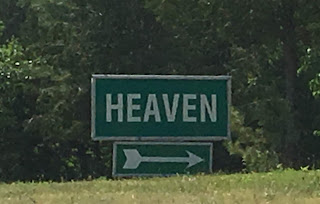 I was tempted to follow the sign but then I thought that I was having such a nice day of riding it would be a shame to spoil it with a rejection at the gates. So instead I stopped for some cool refreshments at the local country store and headed home. With a smile!
2 comments:

It’s become a sad fact of modern life that the price is NEVER the price. Airline seat sale prices pull you in until you realise “the deal” will cost you as much in extras as you thought you were saving, everything from baggage charges to airport fees and fuel surcharges. The Las Vegas hotels comp your room but then add a mandatory “resort fee”. Our electricity provider charges a separate delivery fee. (No thanks, I’ll pick my power up at the electricity store.) Even the post office tacks on a fuel surcharge. It makes me crazy.

What brought this to mind was I just found a hotel invoice for our golf trip to Niagara in May. We got a good room rate (we thought) at $60 a night. But the ten add-ons - facility fees, mandatory charges, taxes on all of it, plus a municipal accommodation tax - pushed it up over $100 a night.

Now I know many of these charges do not accrue to the hotel but rather various levels of government, and the hotel wants its customers to understand where the money is going, but seriously?  And pity the poor desk clerk trying to explain all that to an irate client (me) whose budget has just been blown. There has to be a better way.