What a deal! Not.

An annual event is a 3-day spring golf outing to Niagara Falls. Organized by friends in Southern Ontario I get to go along to provide comic relief on the course and help fund the winner’s take. (I could just send money, but what’s the fun in that?)

This year the organizer got us a “good” rate at the Ramada. Practically next door to the casino and close to all the courses we play, $59.95 a night seemed a good deal. Until we got our bills. 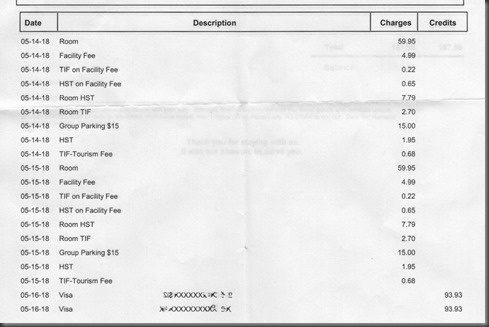 All the sundry facility fees, parking charges, tourism improvement fees, and taxes on all the above, bumped the $59.95 to $93.93, a nearly 60% increase over the quoted rate. Which makes me wonder if hotels will soon start quoting rates without housekeeping and then adding that in as a separate line item. Should be worth about $10 a night I figure. An elevator fee might be another $5. The desk clerk, another $5 a night. Now we’re down to $39.95 a night – a real bargain! And that’s not including potential  “convenience fees” for offering web-based booking and check-in/-out services.

Perhaps it’s time for the hotel industry to require their members to quote all inclusive rates so the traveling public has some idea what their real costs will be. Just like the airlines have been forced to do.
2 comments:

Right. If you have a toaster. That works. Which I don’t. 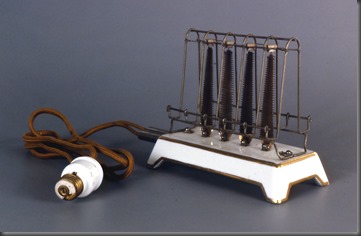 Since then we have had to endure a steady stream of appliances that consume vast amounts of electricity, take forever to brown one side of a slice of bread and warm the other side to slightly above room temperature, and sometimes work for as long as a year before either the element burns out or the electronics flip a bozo switch and expire.

So what is it with toasters? I mean, what appliance could possibly be simpler to manufacture than a box with a heating element inside? Surely someone out there is smart enough to come up with a design that can make consistent toast (both sides) in less time than it takes to run a marathon, and can do so for years before crapping out. I’d shake that person’s hand – and pay almost any price for their toaster. But I’m not holding my breath.

Now I have to go and choose another piece of crap toaster (at well above piece-of-crap prices) to grace my kitchen counter and be the subject of my daily ire for a few months until the cycle repeats.

The most expensive hat I ever bought.

But this came with it, so I’m a pretty happy camper. 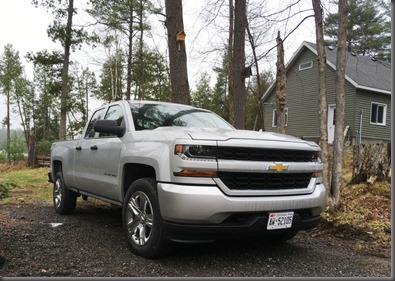 Last week was winter and this week is full-on summer with highs in the upper 20’s (C). That means our road finally dried out enough for two wheels and I finally (!) got to ride. Not very far but it did give me a chance to test ride the little Kawasaki after all the work I put into it this past winter. And it runs great. The new exhaust is a bit noisy and is producing some backfiring on deceleration, but it pulls strong right up to 110+ kph, plenty fast enough for the country roads where it will get ridden. So I’m pleased.

What I’m not so pleased about though is that when I finally put gas in the tank I got a couple of bubbles under the paint. Turns out that either as a result of the original damage to the tank, or my repair work, a couple of pin holes were created that let some gas seep out. Many (expletive deleted)s followed. I have now sealed the inside and am working on repairing the exterior with judicious use of some JB Weld, to be followed by Bondo (again) and paint (again). In the meantime an old spare tank will serve as a temporary fix to keep me on the road. Ugly, but functional.

Been waiting a l-o-n-g time for this.
2 comments: