It was one of those gorgeous evenings when the lake was calm, the temperature was just right, and the sun was dropping quickly in a pinkish western sky. So after dinner we decided to take the kayaks out to see if we could get a closer look at our resident loon family which had been waking us up the last few nights with their nocturnal serenading. 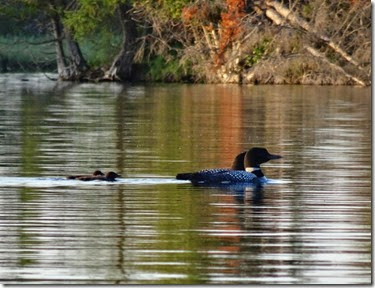 We were able to get within about 100’ or so before dad decided we were too close and got a little concerned. So he dove and came up behind us and proceeded to put on his ‘look at me, I’m hurt’ display to draw us away from his mate and the two chicks.

(Apologies for the video quality – I was bobbing about in a kayak filming at maximum zoom, with a float plane buzzing overhead.)

It was also about this time that the missus discovered she had a stowaway in her kayak. A small (24” or so) garter snake had, we assume, been quietly chasing insects in the kayak when we came along and disturbed his hunt with an unexpected boat ride. Needless to say the return trip was much quicker than the leisurely paddle out into the middle of the lake. And the snake wasn't too happy either. 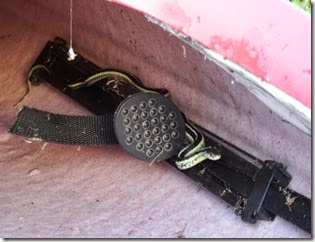 I think a very thorough inspection will be in order before our next trip.

But all’s well that ends well. We saw the loons and got some photos, the snake has a new story to tell the snakettes, we had a nice paddle – at least the first half, and once again we got to realize just how fortunate we are to live where we do.
14 comments:

Once a year the Ottawa chapter of the CVMG (Canadian Vintage Motorcycle Group) holds a one-day rally in Oxford Mills, a small village about an hour south of Ottawa. There’s a lovely small tree-shaded park where owners can park their treasures, and themselves, to enjoy a few hours of showing off and gabbing with fellow vintage bike owners and anyone else who expresses an interest.

It had been many years since I’d attended this rally, and in fact the last time I was there I actually won a trophy for a cafe racer Norton Commando I owned at the time. But I digress.

At any rate Saturday turned out to be a gorgeous day for a nice ride over to Oxford Mills, so we saddled up and went to pay a visit. 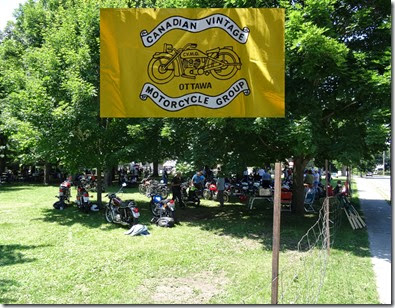 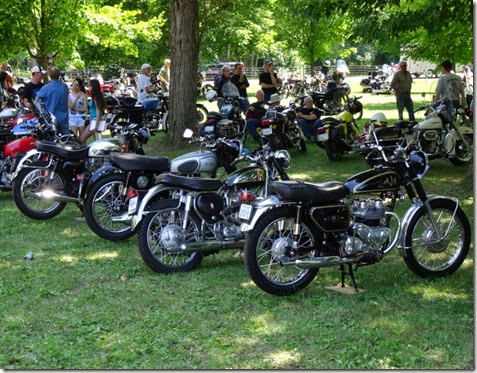 A nice AJS, a couple of BSAs, a Norton, and even a Harley on display. 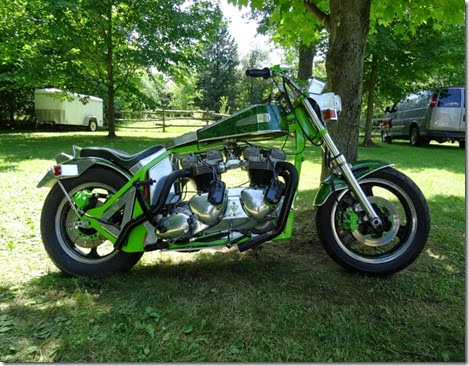 Would have like to have heard this twin-engined Triumph’s bark. 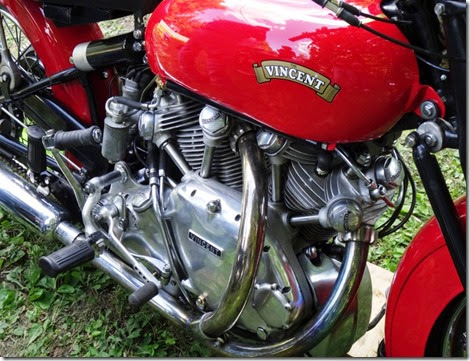 A beautiful Vincent Rapide the owner rode to the rally. 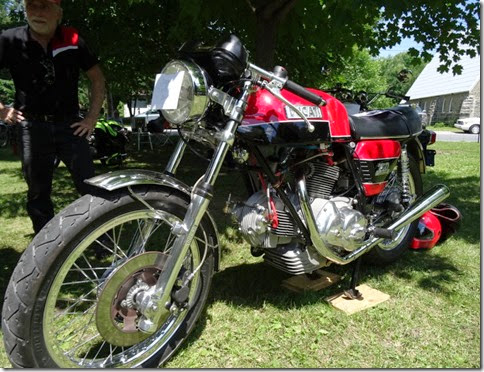 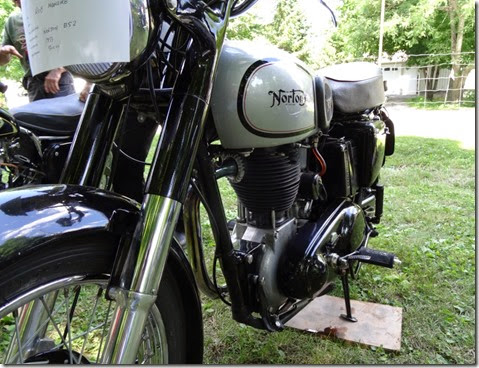 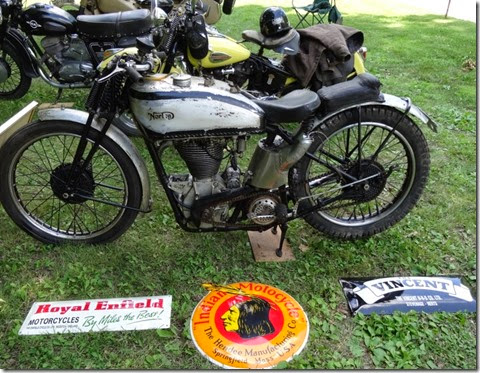 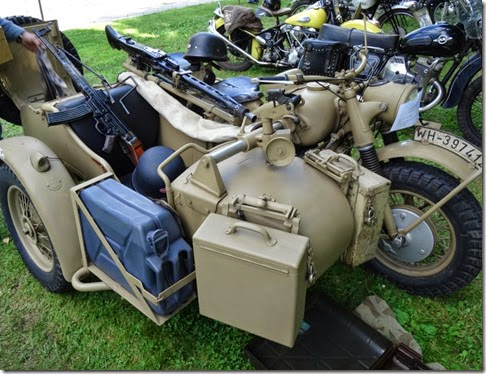 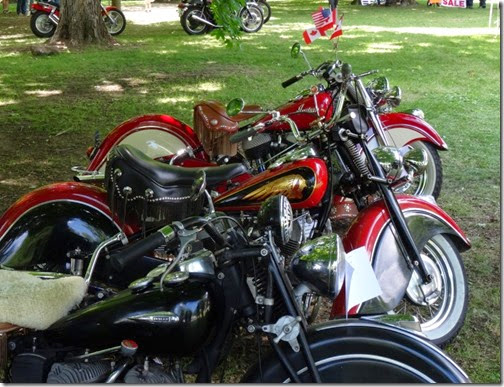 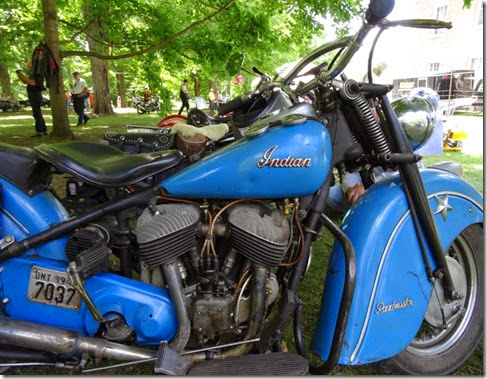 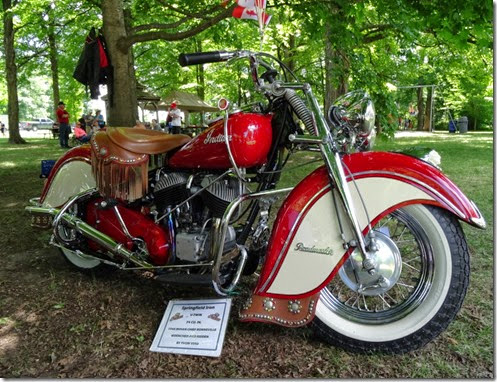 1948 Indian Chief. Probably the nicest restoration I’ve ever seen. It was immaculate.

And now for my first (two-wheeled) love. Back in the late 60s friends who had motorcycles typically rode a 250cc Honda Dream, or maybe a 450 cc Black Bomber. There were some small Suzukis around at the time as well, and the tough guys were on Harley-Davidson Electra Glides. But then another friend showed up with with what I considered at the time to be a ‘real’ motorcycle, a brand new BSA 650cc A65 Lightning. Everything from the bright red paint to the chrome-sided tank to the tank badges that seemed a foot deep called to me. It truly was love lust at first sight. I never got to drive it but did get to ride pillion once or twice, and even as a passenger that big twin thumping along was music to my ears.

Since that time many, many motorcycles have passed through my hands (sadly no BSAs) but my knees still go a little bit weak when I see a beautifully restored A65 like this, one of the nicest looking motorcycles ever to cross the pond in my opinion. 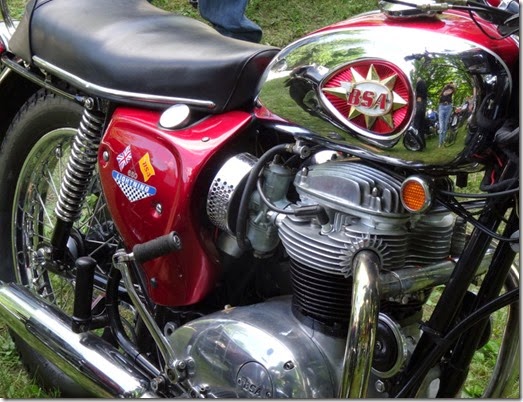 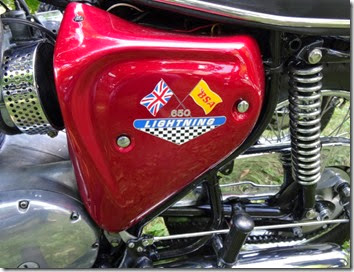 Getting a chance to see this Lightning and relive some of those memories was worth the ride and price of admission alone.
8 comments:

Happy 4th to all my American friends

Celebrate in style and ride safe! 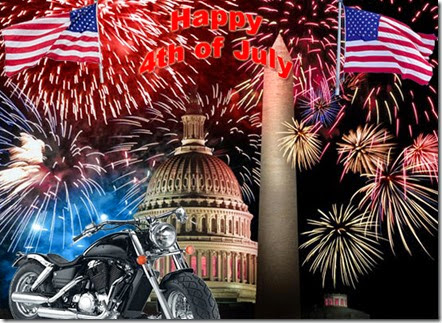 Thank you William of Ockham

William of Ockham was a 13th century philosopher who, among other things, is best known for what is now referred to as Occam’s Razor: “All things being equal, the simplest solution tends to be the best one.”

As the technology we use gets more and more complicated we assume that the solution to our current problem(s) must, of necessity, be equally complex and complicated.
And so it was when I began having starter problems on the Harley a couple of weeks ago. A press on the start button was met with silence. Nothing. Nada. Like the kill switch was off. The idiot lights all glowed happily but, as the expression goes, no one was home. Turning the ignition switch on and off a few times eventually got it started but I was worried that eventually I’d get stranded. Which I did, fortunately in my own garage, when it wouldn’t start at all.

Like most modern vehicles the ignition system is burdened with checks and crosschecks, any one of which will interfere with starting – kill switch off, low oil pressure, fuel pump malfunction, key fob missing (security system), etc. However a diagnostics check showed nothing untoward so I headed to the internet forums for advice on how to proceed. And it got kind of crazy after that: “Replace your kill switch”, “Replace your ignition switch”,  “Cut these two wires and solder them together to make sure your kill switch is working”, “Check this”, “Replace that”, “Your whizbang isn’t”, “Test your starter motor by… “. You get the drift. I was overwhelmed with recommendations but had little confidence anyone knew what they were talking about. (The internet is like that.)

Meanwhile I had gone back to first principles following Occam’s Razor. Of course I didn’t think of it in those terms but as I narrowed it down to what I considered a range of likely problems there was only one solution that didn’t involve tools – replacing the battery in the key fob. I had previously tried my spare key fob but it wouldn’t start with that one either, so I initially dismissed that as the problem. (Both batteries dead? Nah, never happen. Besides, that’s too easy.) But still… could be… maybe.

Bottom line? A couple of small batteries later and the bike is starting fine. No wrenching involved. Nothing cut/soldered/replaced or otherwise tampered with. And William of Ockham is once again proven a very wise man indeed.
11 comments:

To my Canadian blogging friends from coast to coast, Happy Canada Day. Enjoy the day and if you’re celebrating on two wheels like this guy, don’t let the flags flap in your face. 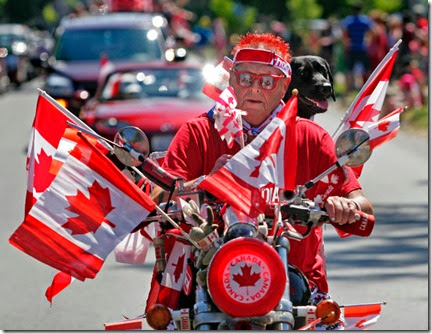