But is it art?

A few years ago, when we were in New York City, we visited the Museum of Modern Art. One of the exhibits that caught my eye was Marcel Duchamp’s “Bicycle”. 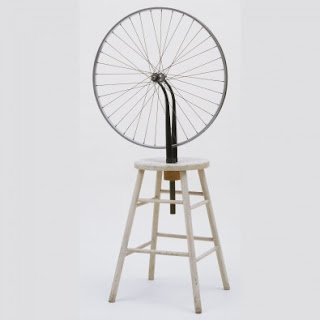 In case it’s not clear from the photo, this work of art consists of an inverted bicycle fork and wheel (sans tire) stuck in the top of a stool. That’s it. That’s the whole piece.

I remember remarking to the spousal unit that only an established artist could get away with this. Imagine an unknown artist (me, for example) showing up at MoMA’s door with this contraption and having it on display the next day - and a sizeable check in my pocket? Not a chance in Hell.

Still, I did think it was kind of cool in a silly sort of way. Along the lines of my bicycle in the trees. (Which MoMA could acquire for significantly less than what they paid for this piece, if they were interested.)

Now it turns out I can have my own version of “Bicycle” should I want a companion piece to my “Bicycle in trees”. (See what I did there? I gave my 'art' a proper name, thus increasing the value tenfold.) A local Facebook for sale page just listed this copy for a cool $350. 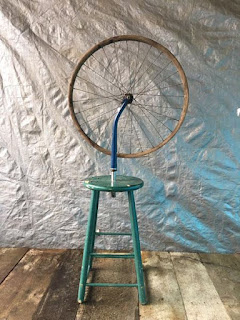 But I think I’ll pass. I have some old bike parts around and need only to find a stool. I figure $10 tops for my very own “Bicycle”. Easier than copying the Mona Lisa, for sure.
6 comments:

A shed full of 'Sea Kings'

For more than 5 decades, the Canadian Navy flew the venerable Sikorsky CH-124 Sea King. Long past it’s projected life span, they were finally retired in 2018 after a 35-year project to select a replacement finally resulted in a new helicopter for the Navy. It was the very definition of a political football as successive governments tried to out-stupid each other over the project.

Now this has nothing to do with anything really, except that it was reported that, in its later years, the aging Sea Kings required more than 30 hours of maintenance for every flying hour.

Which is pretty much like every mechanical device I own. Well, except for that whole life or death thing associated with equipment failure at 10,000 feet.

I was all set to put the second little KZ 440 on the road, until I discovered a dodgy bearing. (Here) Other than pulling the engine from the frame little progress has been made on that front because I’ve been too busy fixing other stuff.

Then I went to use the lawnmower the other day and it wouldn’t start. No spark. A few hours later I had it apart on the bench and discovered the magneto/coil ignition gap was incorrect. Put that all back together and now it’s running again, for a while. Of course I’m not too upset about the lawnmower as it was a good deal. (Here.) But I haven’t found a suitable replacement at the dump yet, and I don’t want to have to buy one.

And today was a nice day to till the garden in preparation for planting season. I hauled out the ancient roto-tiller and it wouldn’t start. It’s always been balky, but eventually I would get it running with liberal doses of quick start or raw gas poured into the carb. This time, no go. I’ve been able to isolate a fuel problem of some sort but that will now have to wait a day or so before I can get to it.

And in the middle of all that I discovered that the “professionals” who shingled the house roof 13 years ago had left a cut in the shingles, exposing some roof sheathing to 13 years of rain, snow, and ice, with the predictable result. As a dry attic is pretty important, everything else was put on hold as I replaced a 2’ by 4’ section of rotted roof sheathing and re-shingled the area.

All of which is to say I’ve spent the better part of the past week just fixing stuff so it could be used, while not actually using any of it. I must be getting close to that 30-1 ratio.
3 comments: