A couple of months ago I posted (here) about being in the market for a new-to-me tractor. Well let me assure you it’s been an experience, with a capital ‘E’.
The last time I drove a tractor I was 16 and working in a lumber yard. (I won’t say exactly how long ago that was; suffice it to say it can be measured in decades, many decades.) In the meantime tractor technology has progressed somewhat, although not nearly as much as one would think/hope. But the bigger difference to me is that back then I couldn’t care less about maintenance, features, benefits, pros and cons, etc.; I just drove it when I was told to. Now if I wanted to get the right tractor for me, at a budget I could afford, I actually had to learn something about the inner workings, PTOs, shuttle shifts, loaded tires, 3-point hitches, snowblowers, bucket loaders, and on, and on, and on. It’s been a great education! I mean who wouldn’t like to spend countless hours talking about things mechanical with people who live and breath this stuff?
Still lots to learn though, and even more once my new-to-me tractor arrives in a few weeks. Yup, committed to it today. The dealer is putting a few mods on for me (I love it when the answer is, “No problem. We’ll just weld a couple of lugs on there and replace the hydraulics with… blah, blah, blah”. You get the idea.) so it will take a while to get it prepped for delivery.
Anyway, it’s an early 70s vintage David Brown 1212, 4 cylinder diesel, 65HP, and comes with a cab, loader, and 7 1/2’ snowblower. I almost can’t wait until it snows, just to try it out. RELAX - I’M  KIDDING! 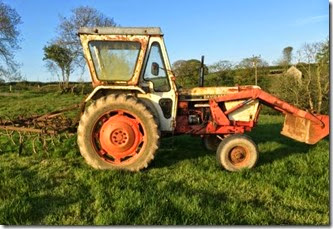 It’s similar to the one in the photo. While it looks its age, it has been well maintained and is ‘known’ to the dealer, so I’m pretty confident on the mechanical side of things. Cosmetics I don’t care about so much. And the dealer is one of those guys who will stand there and talk for hours answering the dumbest of questions, so I know I’ll be well treated.
Now I can occupy my time while I wait for our road to be finished studying the owners manual.
16 comments: 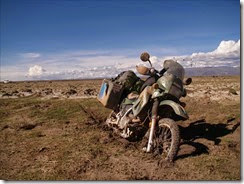 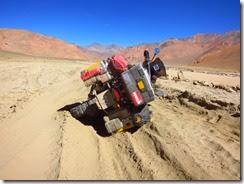 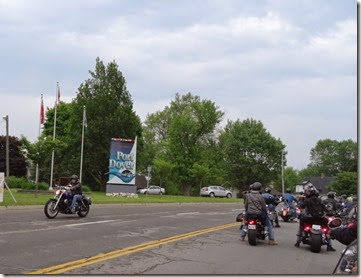 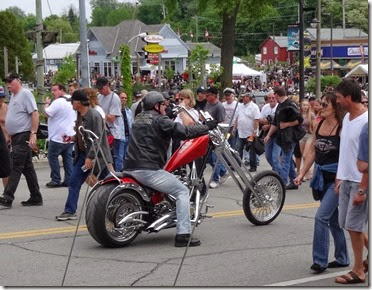 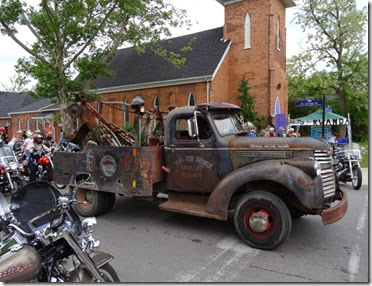 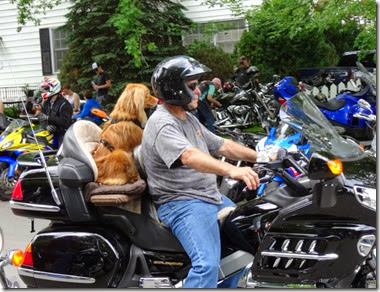 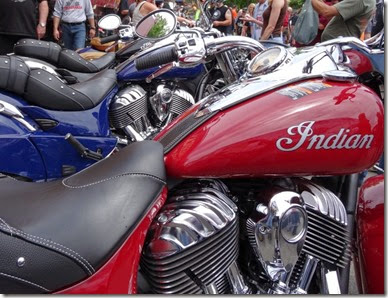 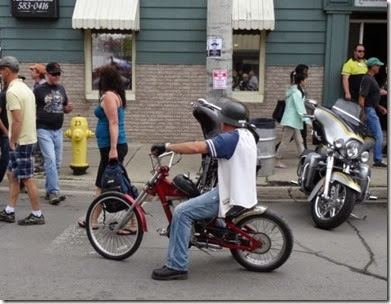 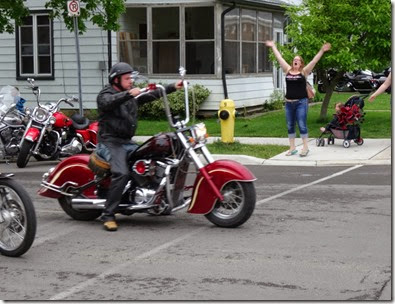 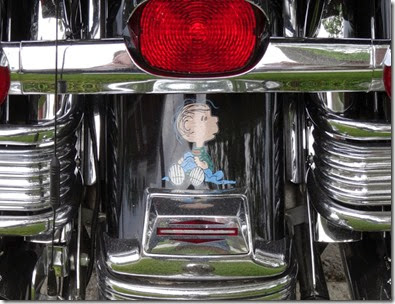 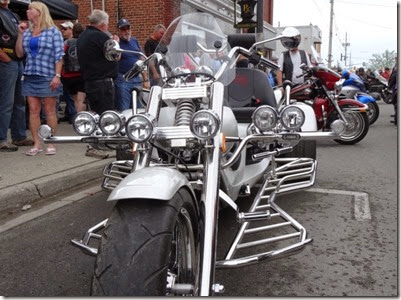 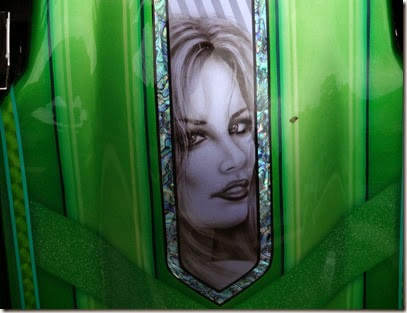 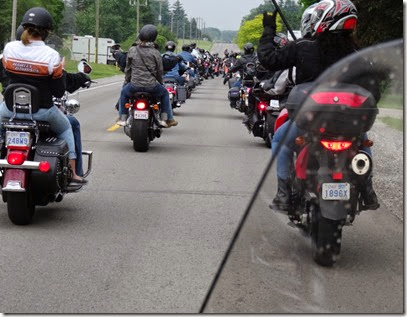 A day at the auction.

As the search for the perfect (read: cheap, in immaculate condition) tractor continues I am presented with lots of interesting diversions, generally called farm auctions!
Often it’s an entire household being sold off due to death or illness and box upon box of bric-a-brac must be gotten through before the auctioneer gets to the good stuff. And so I wait while tin cans of assorted screws and nails go for $0.50 and ‘slightly used’ china sets fetch a buck or two from locals trying to stock their tables for the weekend flea markets. By mid afternoon all the fleamarketers have loaded up and I am left with a few dozen others looking for deals on used tools, shop equipment, farm machinery, and so on.  While everything eventually sells, not everything is worth what someone will pay for it in the heat of a bidding war, so having a budget and sticking to it is key.
Saturday was another auction day, but this one was different. The local feed store has an annual consignment auction mainly targeted at farm machinery and this year’s listing included numerous tractors, old and new, including one that would meet my needs perfectly and which should be at about the right price point (at least that’s what I hoped).
Although advertised as a farm machinery auction, the very first item I saw when I walked onto the property was a 1945 Indian Chief, fully restored. 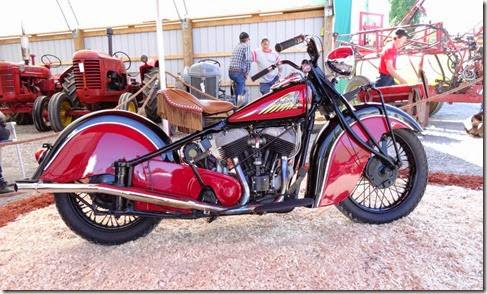 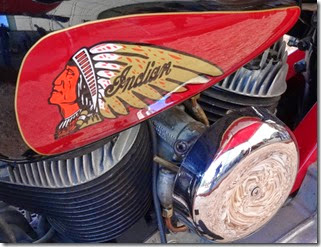 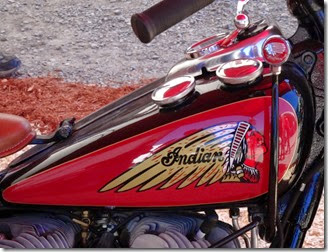 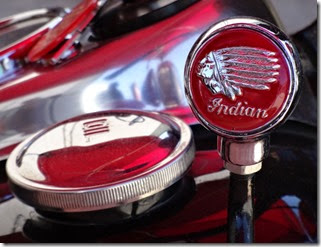 The story was that the owner had it from new and had just recently finished a ground-up restoration when failing health forced him into a retirement home, and the sale of his pride and joy.
It was absolutely beautiful, and would be coming up for auction in about 4 hours – at the same time as the tractors. So I wandered around, checked out the specific tractor I had my eye on (I confirmed it was exactly what I was looking for), and took a few more photos.

This 1921 Autotractor was a first for me. Apparently after the First World War tractors were hard to come by and so people would convert old cars into passable farm equipment by cutting them off just behind the engine and bolting on a rear end with massive steel wheels to till the fields and otherwise drag stuff around. There were even companies that sold nothing but these back-end bolt-on kits.
This one was particular fascinating because it looked like it hadn’t had anything done to it since the 20’s, yet started right up and idled nice and smooth. It had a homebuilt governor made from old Model “A” connecting rods with a 90-degree twist in them, a bit of chain, and a Rube Goldberg’ish linkage that worked. Also note the gas tank – the plastic jug with the hose in it sitting on the rear bed. I was ready to bid on it just as an historical curiosity, especially since it went for (what seemed me) an amazingly low price of $2500. I never did determine if the couple sitting in front of it were the owners, but they sure could have been. 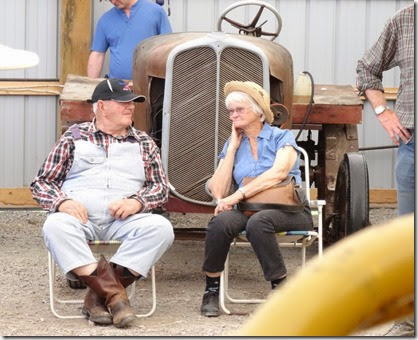 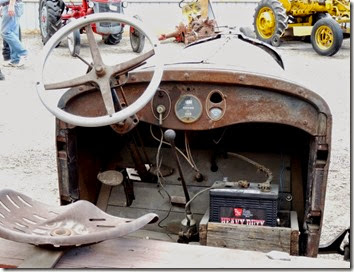 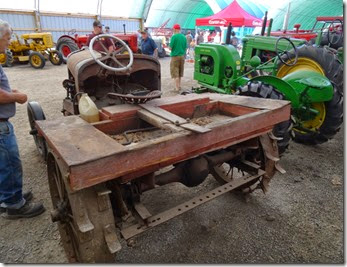 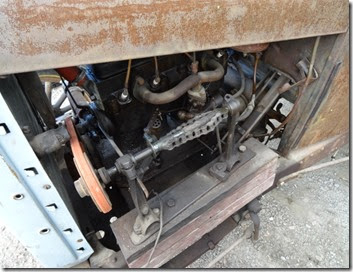 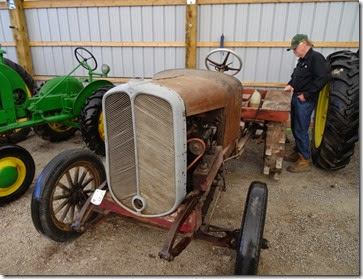 A couple of other nicely refurbished vintage tractors that had their own appeal were a 1953 Ford Jubilee and a 1940’ish Ford 9N with steel wheels. Imagine driving that down the highway! 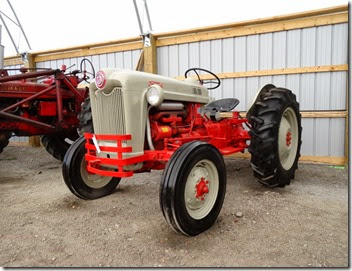 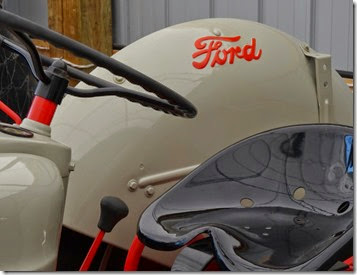 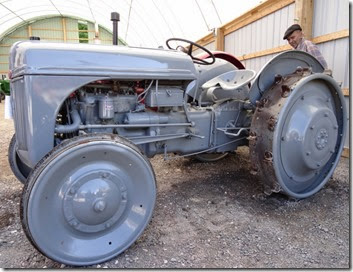 Each went for less than $4,000. Fortunately (or unfortunately) none of those met my requirements, else I could have spent a LOT of money that day.
And my tractor? 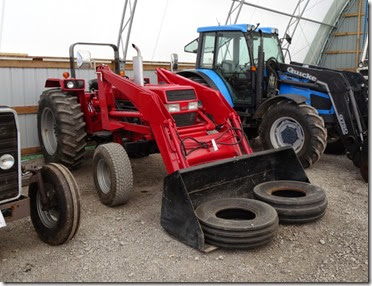 Let’s just say I had the misfortune to choose the one piece of equipment that had 2 deep-pocketed and very competitive buyers interested. Within seconds the bidding had far exceeded my budget and, I expect, the actual value of the machine.
Perhaps next time I’ll get lucky.
Disappointment aside it was a great day just hanging around the auction, watching the proceedings, looking at heavy equipment, and getting a bit dirty and greasy in the process.
And, if you’re still reading this and are curious, the Indian sold to a collector in Peterborough for the princely sum of $18,000 – a helluva deal I think.
12 comments:

The things people do.

I am in awe of those few souls who can take an idea and turn it into something fantastic. Personally I lack the imagination, skill, and, frankly, the patience to do something like this, which makes it all the more amazing to me that someone has.
Some time ago I blogged about John Britten’s homebuilt racer and now another amazingly talented individual has come to my attention.
I first read about Bob Horn and his recumbent racer here at The Kneeslider.  Interest piqued I then checked out his blog. 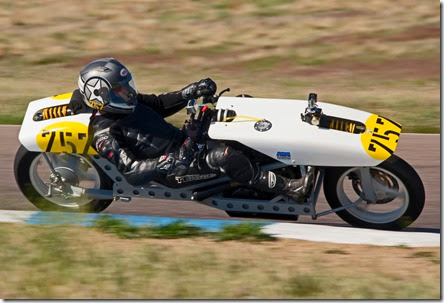 It turns out Bob has been working on this bike for the better part of 6 years now, 4 of which were in construction. His shop – a garden shed. His crew – himself only. Total cost - about $1.00 a day. 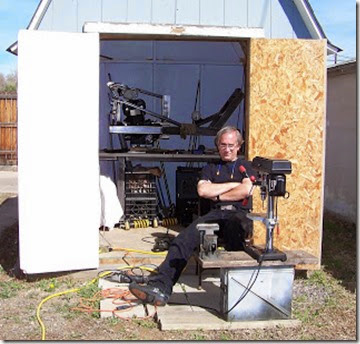 Good on ‘ya Bob, and continued good luck getting those lap times down.
2 comments: