Probably no aspect of motorcycling deserves as much attention as tires. After all, it’s those two tiny  (2 – 3 square inches) contact patches that separate the rider from disaster in the rain, in corners, during braking, and through thousands of miles of sometimes high speed road riding. The science of motorcycle tire design and friction theory are well-covered on the internet with countless treatises by knowledgeable (and, it must be said, not so knowledgeable) writers. And ultimately personal preference, riding style and skill level will determine the right tires for one’s own ride. But one thing that is a certainty is that they will be pneumatic tires – there are no other viable options on the market.
Which is all quite amazing since the pneumatic tire has not fundamentally changed since Robert William Thomson patented the first one in Scotland in 1846. (The first practical pneumatic tire (“tyre”) was developed by another Scot, John Boyd Dunlop, in 1887. This was the start of the Dunlop Tire Company.)
While airless tires and solid rubber tires have been developed for specific uses, the pneumatic tire remains the standard for most vehicles, including motorcycles. But that may soon change. 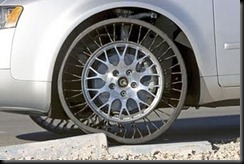 Michelin Tires is testing (and one would assume other manufacturers as well) a new type of airless tire. When and if they make it into production remains unknown at this point, but apparently they also have a motorcycle variant in development. This was covered by The Kneeslider (http://thekneeslider.com/archives/2005/11/17/michelin-airless-motorcycle-tires/)

back in 2005, so it’s not hot-off-the-presses new technology. But perhaps the fact they’ve been working on this for at least 6 or 7 years now is indicative of the challenges faced by manufacturers to provide a safe and reliable tire for all the driving (and riding) conditions we experience.
Still, they are cool and innovative and it would be nice to see a real alternative emerge to what is, essentially, 150-year-old technology. Besides, if you’ve ever experienced a blowout at speed on a motorcycle tire you’ll REALLY appreciate not having to worry about that few seconds of shorts-soiling excitement ever again.
5 comments:

The loop (and the Arrow)

For the first time in ages, it seems, the stars aligned and I had a whole day to myself. Sunny, temperatures in the mid-20s (70 – 80F), and a honey-do list that was more or less under control meant that I could spend the entire day riding if I wanted, so I did. Well most of it anyway.
There’s a 400-kilometre loop (~250 miles) I’d wanted to ride for some time that heads west from here through some really pretty back country to the headwaters of the Madawaska River. Dotted with small tourist towns the curvy roads are well maintained and generally not too heavily travelled, making for perfect riding conditions. 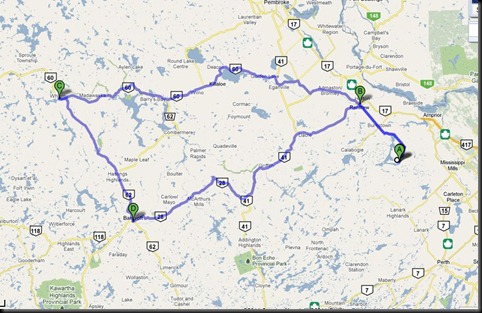 So in the vernacular of the locals I “headed up the line” to Whitney, passing through the villages of Eganville, Golden Lake and Wilno among others. It’s great cottage country so these tiny settlements were all quite busy with tourist traffic as craft shops, liquor stores, and outfitters were all doing a booming business.
In Barry’s Bay I stopped for lunch (apologies to Bobskoot, no photos of my Subway sandwich) and came across this memorial to a famous Polish-Canadian. 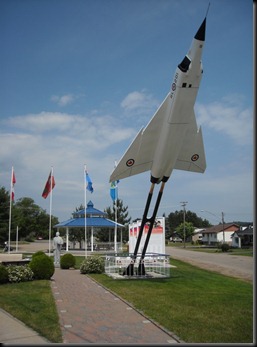 But first some history.
After the Korean War the Canadian government started a project with A.V. Roe Canada to build the world’s most advanced supersonic fighter aircraft.The CF-105, or Avro Arrow as it was known, flew its maiden flight in 1958 with Janusz Żurakowski in the pilot’s seat. In subsequent test flights the aircraft exceed all expectations, achieving a top speed of nearly Mach 2.0 and establishing a benchmark for other fighters in development at the time. (My wife is one of the few people who actually saw the Arrow flying as they lived near the test field.)
Then in 1959 in a surprise decision, the newly-elected Conservative government under John Diefenbaker killed the project, putting nearly 30,000 workers out of a job overnight. The rationale for the decision has been explained at various times as a reallocation of funds from fighter aircraft to Bomarc missiles, or that the US government, the Arrow’s largest potential customer, refused to buy foreign-built aircraft, no matter how good, or that the project had been infiltrated by a Soviet spy and therefore had to be cancelled and all plans, prototypes and flying aircraft destroyed. In fact it was probably more mundane than any of that and was simply politically motivated. Diefenbaker’s new government came to power with a mandate to reign in the previous Liberal government's spending, and this was clearly low-hanging fruit with approximately $500 million spent to date and many millions more to come. And the directive to destroy all assets associated with the program would ensure that even if the Liberals regained power, they would never be able to resurrect the program.
The end result was that many of Canada’s brightest aerospace engineering minds headed south to the USA, seriously damaging Canada’s aerospace industry for generations to come, but hugely benefitting America’s nascent space program.
As the Arrow’s chief test pilot Janusz Żurakowski left A.V. Roe and settled in Barry’s Bay where he died in 2004. This model of the Arrow and a series of information plaques concerning his life as a war-time pilot in Poland and later in the UK, and his subsequent years as a test pilot are on the main street of Barry’s Bay in recognition of his contributions to both the aerospace industry and in later years his adopted community. Very cool.
But I digress.
From Barry’s Bay I continued west to Whitney, at the entrance to Algonquin Park, then dropped south to Bancroft for a weird parking lot conversation and a rest break before heading back home through Denbigh, Khartum, Dacre, and Renfrew.
All told, 396.4 kilometres, and a realisation that I am seriously out of shape for any kind of distance riding. I obviously need more saddle time that isn’t just 1/2 hour spurts into town or to the golf course. Will have to work on that.
5 comments:

I took a long ride today (which I’ll post on later) and I had stopped at the Tim Horton’s in Bancroft for a break. I was sitting on the curb beside my bike with a cigar in one hand and an iced cappuccino in the other – just chillin’ - when a minivan pulls into the spot beside me. An older, white-haired gentlemen gets out, looks down at me and says, “Nice day.”
“Yes,” I said “it’s beautiful… hot, sunny.”
“Well you don’t want to overdo it. 70 years ago I was born with a mole on my back and they had to remove it last year.” he said. “Melanoma. 70 years I had that mole and it was okay until last year.”
Not being quite the topic of conversation I was expecting I was a bit taken aback and mumbled something like “70 years, eh?”.
“Yep,” he said. “My mother is still alive – she’s 92 – and she told me to watch out for that because it was going to give me trouble some day. She was right. 70 years.”
He shook his head. “Enjoy your day.”
And with that he walked into Timmy’s and I was left thinking, “Thank god he didn’t have colorectal cancer.”
4 comments:

I had a tournament start time of 7:30 so I had to be on the road shortly after 6:00 to get to the course with time to sign up and get a brief putting practice in.  I was running late and was tempted to just jump in the car and go without having to pack my golf clothes, put on a jacket and helmet, and perform all the other minor but time-consuming activities involved in getting ready to ride.
I decided to hell with it – it was too nice a day not to ride and if I was a bit late, then too bad.
The sun was up and just starting to rise above the trees lining the road. The air still had that early morning fresh smell (I’d make a million if I could figure out how to package that in a spray can) that lifts the soul with the promise of a brand new day ahead. And best of all, there was no traffic.
But there were deer, lots of deer, having their breakfast alongside the road. I haven’t hit one yet, but with two motorcycle-deer collisions in the area so far this year (one of them fatal), my spidey sense was working overtime trying to judge which way they’d jump as I went past. Fortunately they all either ignored me or went the right (i.e. other) way. (As I reread this last paragraph it reminds me of those headlines, “247 passengers survive as plane lands safely at O’Hare!”.)
After 15 minutes or so I left the the winding roads and forest and entered the more-or-less deer-free zone of straightaways and farmers’ fields. So with the wind in my face, the sun on my back, and the steady throb of the engine beneath me I relaxed and let my mind wander. And I found myself slipping into that Zen state where riding becomes effortless and the man-machine interface disappears. As anyone who has experienced this will tell you, you become “one” with the machine which seems to anticipate and respond to your thoughts without physical input. Time slows to a crawl.  It’s just you, your bike, and a road… to somewhere, anywhere.  It really is a magical experience that, if I’m lucky, I will get to enjoy once or twice a summer.
In this state I was sorely tempted to just keep on going, and would have but for the expectations of my playing partners. So I made the turn into the club parking lot, promising myself to do more early morning rides.
P.S. I should have kept riding. I may have been up at 5:15 but my golf game managed to sleep in until about 9:30 and arrived bleary-eyed and in an ornery mood.
6 comments: