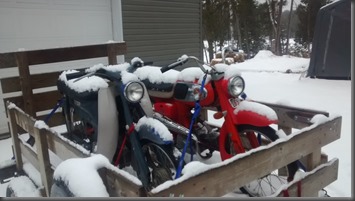 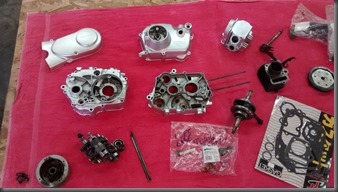 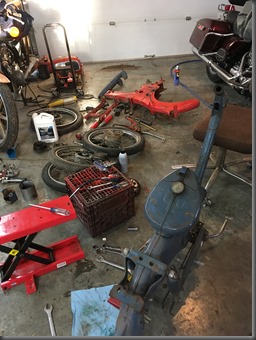 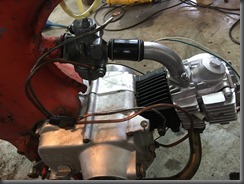 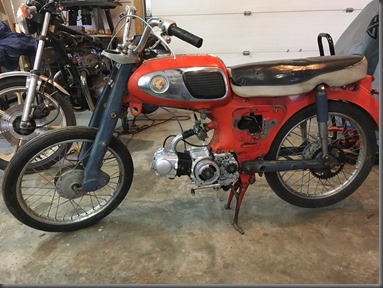 All that needs to happen now is for the snow to go so I can road test my little Frankenbike before deciding on next steps. Besides it's time to refocus efforts on the Kawasaki so it's ready to go when the roads are clear.
4 comments:

The one magazine I subscribe to and read faithfully is American Iron. They have great tech articles, do a lot of reviews of American V-Twins (Harley and Indian), and usually feature one or two custom bikes as eye candy. 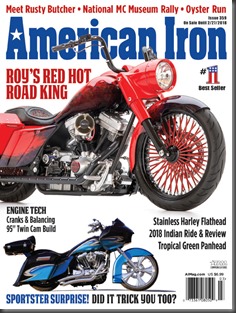 One such recently caught my eye. Advertised as "Roy’s Red Hot Road King", Beelzebub is a beautiful exemplar of the customizer's art. And while not to my personal taste I can appreciate the effort to conceptualize, design, and build such a machine.

But in reading the article I was struck by the fact that almost no part of the motorcycle is an actual Road King part. It may have started life as a Road King, but in this rendition it sports an aftermarket frame, an aftermarket engine, aftermarket wheels, exhaust, shocks, bars, controls, tank, seat, and so on. About the only original equipment still on the bike is the headlight and rear inner fender.

So calling it a Road King is, in my opinion, tantamount to insisting that the hatchet I hold in my hand is the very same one used by Washington to chop down the cherry tree, except that the head has been replaced twice and the handle four times.

… is another man’s treasure. An old saying, its etymology has been lost in time. But the truth behind the saying is as valid now as ever and forms the basis of much of the reuse/recycle ethic of today.

I manage a small library run out of our community centre and every so often it’s necessary to cull the collection, removing duplicate or damaged  titles and clearing out copies that, for a variety of reasons, are of no further interest to the library’s users. However there is still a lot of life in these books so they are then donated to a recycle shop that will sell them to raise funds for the local hospital. They love to get books because they are always good sellers, bring people into the shop, and generate a significant amount of revenue.

So it was that one recent day, after dropping off four large boxes containing dozens of books I did a bit of browsing amongst the wares in the shop and found a few treasures of my own. Along with a bag of new-to-me books (have to replenish the stock somehow) I also managed to score some old DVDs, including a copy of Some Like It Hot with Marilyn Monroe, which just may appear on the marquee for an upcoming movie night.

You just never know what you’re going to find, which is what makes browsing in second-hand stores so much fun. Besides, with a couple of feet of snow still on the ground, what else are you gonna do?
4 comments:

Can you see me now?

I love getting parcels in the mail. It takes me back many decades to a time when most everything came into our household by parcel, usually from Sears, or Eatons. Certainly Christmas was the prime time for parcels and the mysteries they contained, but at any time of the year, a package arriving by mail usually meant something special and we kids would hover until its secrets were exposed.

Times and circumstances may have changed but I have never lost that sense of anticipation when opening a package, even if I know what’s in it.

As the astute reader may have guessed, a package came in the mail today. 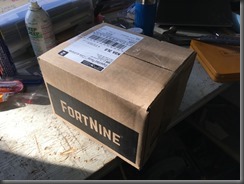 FortNine is quickly becoming one of my favourite online shopping sites. They carry a great range of products for all sorts of motorcycles and, best of all, they’re Canadian. Which means no exchange rate hits, no import duties or taxes, usually no shipping charges, and I have the items I ordered on my doorstep in two or three days. What’s not to like, especially when shipping fees from the US can often surpass the item’s cost, and it can sometimes take weeks to clear through Canadian customs?

With that bit of free advertising out of the way, here’s what I got. 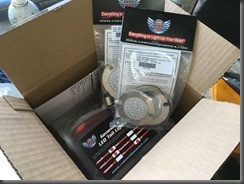 A few years ago, after a couple of close calls with inattentive drivers, I installed LED brake and signal lights on the Dyna. They were very bright, I loved them, and, best of all, no more near rear-end misses. I’d been meaning to do the same with the Road King this past year but life intervened and I didn’t get around to it. Until now. So with some help from the folks at FortNine I determined what was required and ordered the parts Monday night. They arrived this morning.

Fifteen minutes later the signal and tail lights were installed, a simple plug-and-play operation. And I’m very pleased. Not only are they much brighter than stock, but I believe the instant-on nature of LEDs also raises visibility. 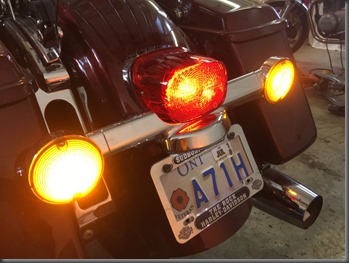 So to all the half-blind, burger-eating, texting, cell-phone using morons out there on the road, can you see me now?
10 comments: 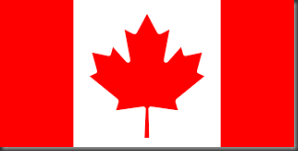 So, the Canadian government just changed two words in our national anthem, you know, that song that you hum because you only know about four words, while waiting for the puck to drop at a Senators hockey game. The change is, perhaps, worthy of a shrug, if that, but if you follow the right-wing media you’d think Chicken Little was right.

A bit of history is in order.

Canada’s national anthem, O Canada, was originally written in 1880, in French, to celebrate St. Jean Baptiste Day in Quebec. English words were written some 26 years later in 1906 and another English version was created in 1908. It is this later version that forms the basis for today’s anthem, although it too has been modified several times over the intervening years.

This particular debate, a century later, centres around making the anthem more gender neutral. The 1908 version included the now rather awkward phrase “thou dost in us command”, which was subsequently revised in 1914 to read as “in all thy sons command”. In recent years this phrasing has caused some to get their knickers in a knot because it “disenfranchises 50% of the population”. Okay, I can see the point, sort of. Then again, I don’t take offense when someone refers to God as a “she” so my offense threshold might be higher than most.

But no one asked my opinion and so, after decades of debate, a change has now been made to the official version that replaces “in all thy sons command” with “in all of us command”. Which, interestingly, brings the newest version back in line with the original. But that didn’t stop the gnashing of teeth and screams of political correctness gone mad by some in the media. They are so incensed you’d think the government had cut their subsidies and eliminated their tax breaks. And the online commentariate? Let’s not go into that hate-filled swamp.

Wouldn’t it be wonderful if people could get so enraged over things that really matter, that will affect millions of lives? Things like climate change, access to clean water, food, wars, displaced millions. It’s a very long list which, in my opinion, has no room for faux indignation over a song that few Canadians ever sing, or even know the words to.
6 comments: