I (sort of) follow a number of Facebook marketplace sites where people advertise everything from furniture to used makeup to garbage bags full of clothing (“All boys, size 6”). Truth be told it’s mostly junk, but every so often something catches my eye, like this 12” cast-iron fish. (I know, one man’s junk….) 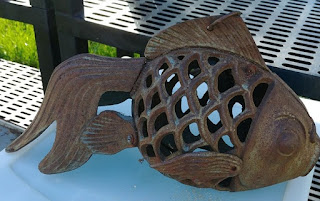 A bit of a cleanup and a coat of paint and it could be worthy addition to my collection of garden art. Of course the seller would have to reduce their asking price by about 50%, but maybe.

What intrigued me though was the vendor felt it necessary to describe the fish (remember, it’s cast iron) as being from a “non-smoking home”. Really? How much second-hand smoke do you think a chunk of cast-iron can absorb? Your entire family could smoke until your house smelled like a blast furnace and no one would ever know it from the fish. Besides, it’s probably spent its entire life outdoors.

I don't really understand why this irks me, but it does. And it's pervasive. Of course, furniture and fabrics of any kind, they do absorb the smell and it’s good to know that won’t be a concern. But for pots and pans, dishes and cutlery, metals of all kinds, porcelains, and even bricks (yup – used interlocking bricks from a “smoke-free home”) it’s just plain dumb.
2 comments:

When did 'Olympic-size swimming pool become' a unit of measure?

I understand that the media want to convey the idea that this is lots of water, but surely there’s a better way to communicate that message. I have never seen (outside of TV) an Olympic-size swimming pool. I know it’s big, but how big? I have no idea. Nor does the International Olympic Committee as no standard exists that limits the depth of such a pool, only it’s length and width. And even those dimensions are minimums only.

If they are going to use meaningless comparisons, why not 747s? “That’s the equivalent of 36 747’s full of water going over that dam every 13 seconds.” I can get a visual from that.

But, better yet, why not use an actual, legitimate measure? There’s the ton (either short or long), or tonne (1,000 kg, 2200 lbs)? Or even the homonymous tun (4 hogsheads, 252 Imp. gallons). All would be more meaningful, and certainly more accurate. Even gallons themselves, although I expect when reporters begin talking about millions, or even billions, of gallons eyes will glaze over and people will probably wonder “How many Olympic-size swimming pools is that?”

But then again, the average person doesn’t know when to properly use “number” versus “amount”, so perhaps we’re stuck with Olympic-size swimming pool. 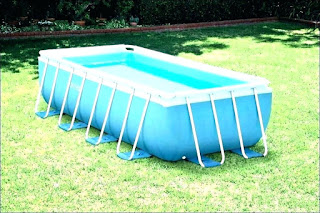 CODDIWOMPLE (v.) To travel purposefully toward a vague destination.

Could there possibly be a better word to describe what many (most?) motorcyclists do? I rarely have a destination in mind when I head out on a ride. I will have a vague notion of direction, and possibly even an idea or two of where I might stop for lunch, or a coffee. But for the most part I wing it. “I wonder where that road goes.” “Well, let’s find out.”

And so we discover new places, and new ways to get to old places. We chase the sun, or try to avoid threatening storms. We get lost, and found again. We meet new or old friends sharing the same journey.  We add to our repository of riding experiences. And we return home knowing we had a great ride, no matter how long, or short.

Yes, it is THE perfect word. 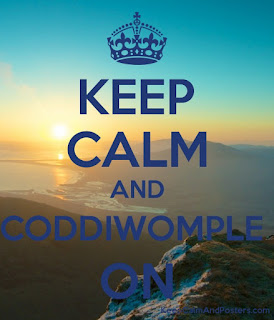