Fire and Fury - a review

I just finished reading Michael Wolff’s Fire and Fury: Inside the White House which covers the first 9 months of Donald Trump’s presidency. When the book was first released it was panned by the President as “the Fake Book of a mentally deranged author” which, predictably, sent sales soaring.  And there are legitimate concerns about Wolff’s widespread use of unattributed quotes and anonymous sources.

But the aspect of the book that I found most interesting, and about which there is little dispute, is the infighting that took place (and continues to take place) between the various factions who inhabit the White House halls. With Jarvanka (reportedly Steve Bannon’s pet name for Jared Kushner and Ivanka Trump) on one side with decidedly progressive leanings, Bannon at the extreme opposite espousing alt-right policies, and centrists and professional politicians in the middle just trying to keep the President from self-destructing, the palace intrigues are worthy of Shakespearean treatment – or at least a Netflix mini-series.

It is easy to see why avid Trump supporters may not like the book as it doesn’t paint a very attractive portrait of the President; only insiders will ever know the truth about some of the claims made by Wolff. But still, I found the book to be a fascinating read. Even when I suspected certain claims might be exaggerated the narrative around the mistrust and outright antagonism between members of the President’s inner circle made for interesting, if disconcerting, reading.

If you are interested in politics in general, or US politics in particular, you should read this book. Just do so with a pinch of salt.
4 comments:

Well, we’re back, safe and sound and all in one piece (although there were times….).

Here are a few highlights of a great trip.

After flying into Marseille and spending a couple of days locally getting over the jet lag we drove west, towards Spain, to arrive at the city of Carcassone. 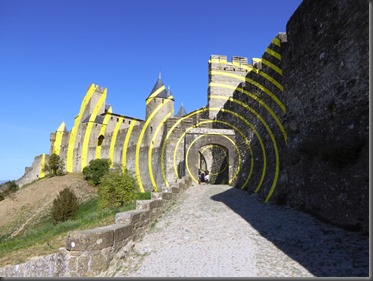 Initially fortified by the Romans (circa 100 BC), Carcassonne is the oldest intact walled city in Europe and is well worth a visit. The concentric circles are an art project undertaken to commemorate 20 years as a UNESCO Heritage Site. They appear as circles only from this one vantage point; from any other viewpoint all one sees is odd splashes of yellow. (And, no, they aren’t painted on the walls but are a sort of removable plastic wrap.)

While in the area we drove part of the Cathar trail in the foothills of the Pyrenees, where the Cathars took final refuge in the 1200s. This included a visit to the ruins of Termes, located at the end of a very winding, 40 km mountain drive and a long, uphill hike. 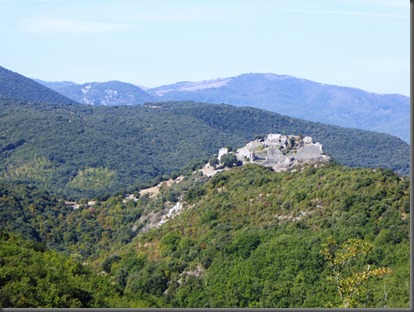 Heading east, a spur-of-the-moment side trip found the remains of an old Roman aqueduct, located in the middle of an olive grove. (That’s what I love about Europe – you never know when, or where, you’re going to stumble across something cool and historic.) 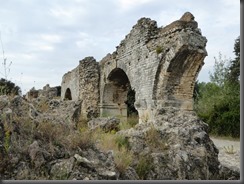 Which brings us to Nimes and Les Arenes, a first century AD Roman arena located in the heart of the city. Originally built to seat 24,000, it’s been partially restored and is still used today for concerts, bullfights, and other public events. Not the largest of Roman arenas, it is one of the best and most intact examples that remain. 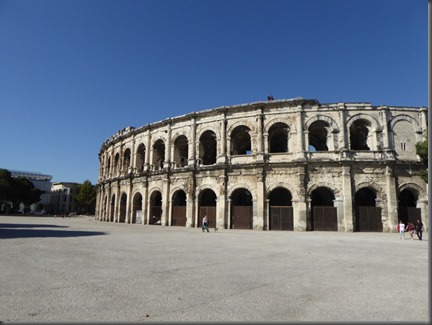 Our next stop of significance was the iconic Pont du Gard, part of a Roman aqueduct by which water was brought to Nimes from some 50 kilometers away. The engineering was incredible as the flow dropped a mere 56 feet over that entire distance. Today families picnic under the bridge while kayakers and swimmers enjoy the shallow river flowing below. 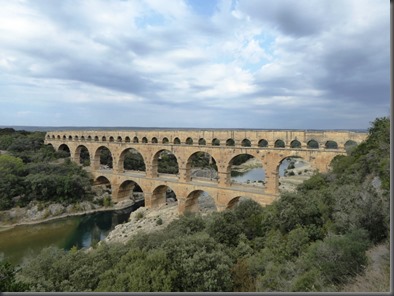 We then leap-frogged Marseille and spent a few days along the Cote D’Azur, visiting St. Tropez, Nice, and Monte Carlo. Not being mid-summer the beaches were sparsely occupied and crowds were few, which made it great for simply walking about and ‘touristing’. Which included visiting the casino at Monte Carlo, walking in the footsteps of Bond, James Bond, among others. 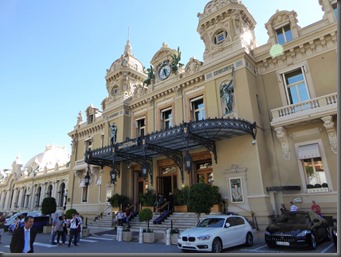 Monte Carlo is all about conspicuous consumption, from the yachts in the harbour, to the sheer number of Bentleys and Lamborghinis on the roads. This car, made in Germany, bought in California, registered in Kentucky, and parked outside the casino was a good example. In comparison, Nice almost seemed affordable, and was, in our opinions, a much nicer city. 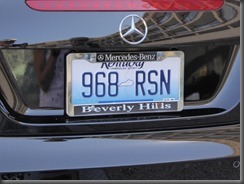 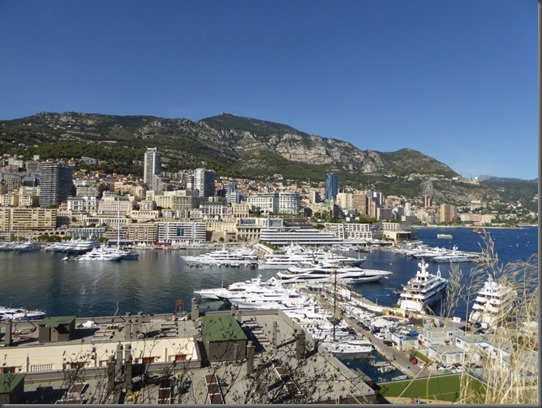 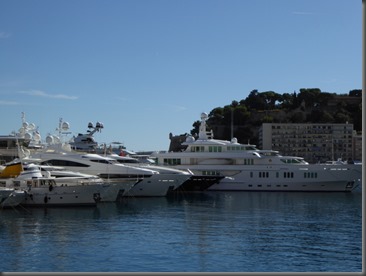 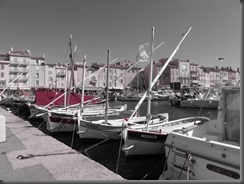 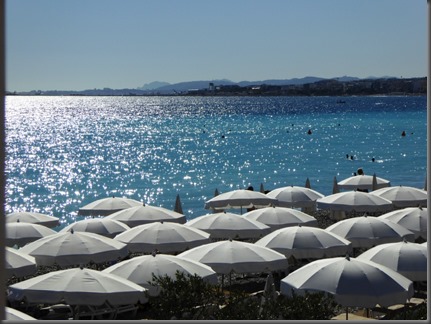 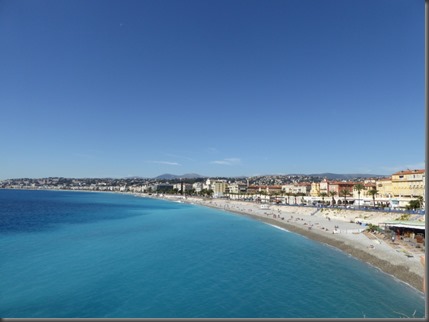 Our last major driving experience was to tour Les Gorges du Verdon. Referred to as the Grand Canyon of Europe, this natural wonder offers some spectacular views and hair-raising driving. We spent most of a day driving the canyon and mountain roads, and still missed much. This map snippet gives some idea of the nature of the roads. Trigance to Aiguines may only be 35 kilometers but following highway D71, plan on it taking a couple of hours to drive. And that was only a part of the trip. Forget the Dragon’s Tail. If you want winding roads, this is the place to be. 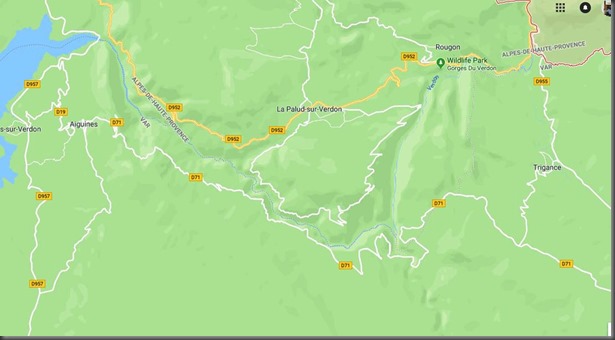 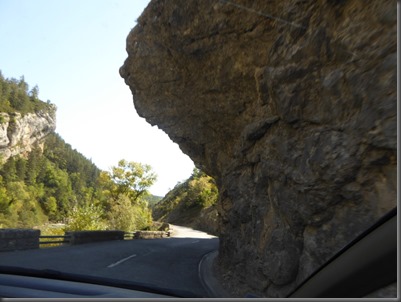 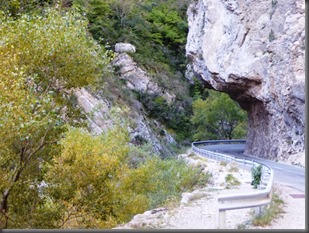 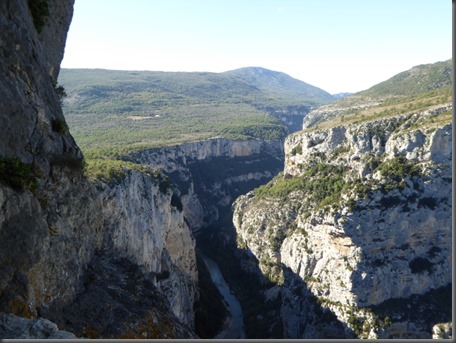 And, as always, one eye was out for interesting motorcycles. The owner of the electric scooter was busy explaining its benefits – in rapid-fire French – to a couple of interested onlookers. My French is passable but not good enough to follow him. The Harley was in the dealership near Nice where I stopped to pick up the requisite tee-shirt. And the 2 Mash motorcycles were examples of dozens we saw on the road. Seems like Mash is doing a booming business in Europe with its small-displacement, retro-styled bikes. 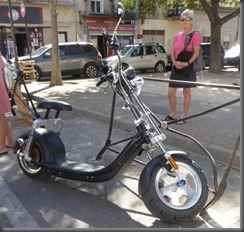 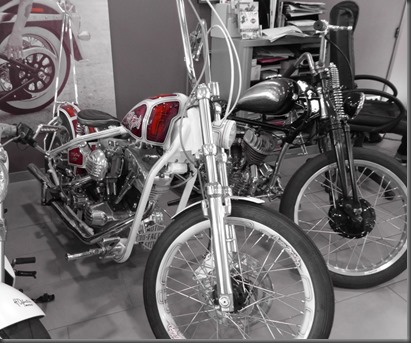 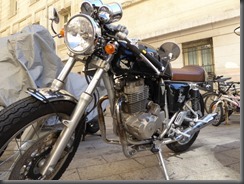 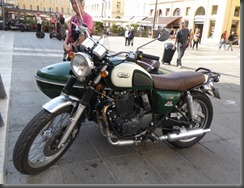 But the most interesting bike I saw was this Suzuki Hayabusa side-car rig we came across in La Ciotat. One doesn’t normally consider a performance machine as a sidecar platform but Choda Sidecars of France apparently do. A very cool and unique machine. 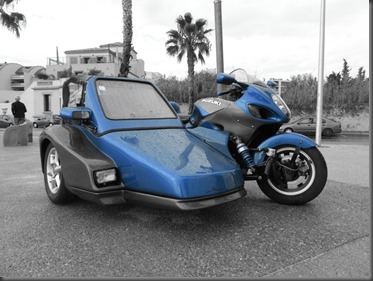 We covered a lot of ground and saw some amazing places over 2 weeks. But now it’s back to reality as summer fades and old man winter threatens just around the corner.
4 comments: