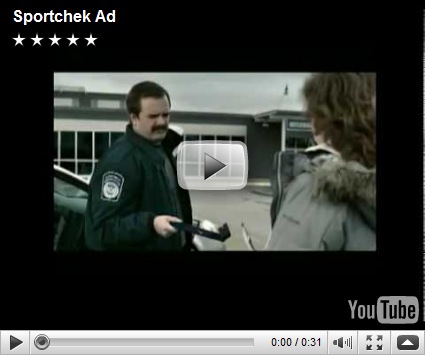 The plan was to avoid the north of Superior route by dropping down into the US at International Falls and then head east, crossing back into Canada at Sault Ste. Marie.
We awoke that morning just south of Kenora to the sound of rain on the tent. But it wasn’t until we opened the flap and looked out into the gray dawn that we realized it was freezing rain. The grass, our motorcycle, the tent - all were covered with a sheet of ice. Certainly unexpected for August, but generally representative of the terrible weather we’d had all summer.
By the time we’d had some breakfast and struck camp, the temperature had risen enough so the ice was no longer a factor, but it was still damned cold.  Nonetheless we loaded up and bundled up and headed south to the border where we were greeted by the most ignorant prick of a customs officer we have ever dealt with before or since.
Picture the scene. By this time it’s noon and we’ve been riding for about 3 hours. The temperature is hovering around 40 degrees and it’s been raining all morning. As we come up to the booth he says two words, “Over there” and directs us to a secondary inspection area. While we’re standing out in the rain and he’s sheltering under the building’s eve, he has us unpack everything, unroll the sleeping bags and tent, open up our luggage and spread it on the ground, open up our toiletries for inspection including squeezing our toothpaste and having my wife unscrew her lipstick to the point where it came out of the tube.
When I had the temerity to ask what the problem was, I got a lecture on the perils of drugs and how it was his duty to ensure no one one was going to pollute America’s youth with illegal substances. Probably the same illegal substances that were crossing by the kilo in the trunks and door panels of the cars being waved through without a second glance, but that he was not going to find on us no matter how hard he looked.
Ordering us to not touch anything (anything being everything we had, laying on the ground in the rain), he then disappeared for about 15 minutes with our passports only to return with a curt, “You’ve got 5 minutes to clean up this mess and get out of here.” He then turned his attention to making someone else’s day miserable, and we got the hell out of there before he thought of anything else.
At least he didn’t have the gall to say “Welcome to the U S of A”.
19 comments:

… if you’re lucky that is.
Our friends over at Riders Discount are celebrating a milestone – their 10,000th Facebook fan – with a  $500 helmet giveaway.
It costs nothing to enter, so why not take a minute and pop over there to fill out the form. This may just be your lucky day!
http://wildfireapp.com/website/6/contests/22123
1 comment: