Certainly not everyone’s cup of tea, but if you’re a transvestite biking artist (Or is that biking transvestite artist? Artistic biking transvestite?) with a deep desire to take your 50-year-old teddy bear (Mr. Measles – in the glass box) on a pilgrimage to Germany in style, this custom knucklehead may be just the ticket. 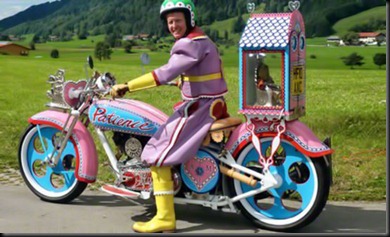 There’s an interesting write-up on the artist and the bike here. Best observation: “While custom shops, tattoo parlors, and clothing outlets are busy selling 'individuality', Perry has taken a brave and lonely path, to BE an individual.” He sure has.
3 comments: 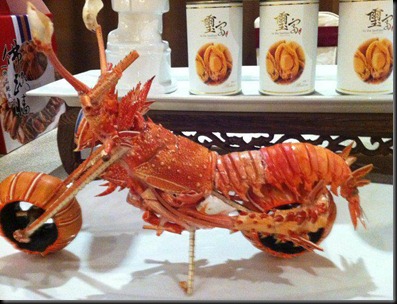 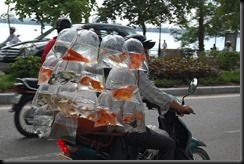 There’s a long-standing myth that goldfish only have a 3-second memory. In other words their entire understanding and knowledge of their universe began 3 seconds ago, and by the time they read this sentence (if they could read) their world will have changed. (I sometimes wish I had that affect on all my readers, but I digress.)
In fact it’s been demonstrated that goldfish have very good memories, up to 6 months or more in some cases. But that doesn’t serve my purpose at  the moment, so let’s stick with 3 seconds for now.
This came up again a day or so ago when I heard someone on the radio mention the 3-second memory fiction as if it were fact. It also happened to be at the same time I was outdoors on a beautiful, sunny, warm day desperate for a ride but knowing full well I was at least a month away from having ice-free roads on which to ride.
Truth be told I was daydreaming about that perfect ride I’m sure to have as soon as the snow goes and I no longer have to bundle up like the Michelin man to avoid freezing to death in a 60 mph wind chill.
And in that odd way that the mind sometimes wanders and thoughts conflate I got to thinking that perhaps goldfish, if they really only had a 3 second memory, and if they really could ride, would always experience that perfect ride.
Just think about it. You have no history, no concerns beyond what happened in the past 3 seconds. You have no concept of a future and hence no worries about what’s around the next corner, or the next stage of your life. You are just here, just now. It’s you, a motorcycle, and a road. What could be more Zen, more in-the-moment than that? And isn’t that what the perfect ride is all about?
5 comments:

Have a brand new set of Dunlop K591s on order from Dennis Kirk so I’ll be on nice fresh rubber come the spring. 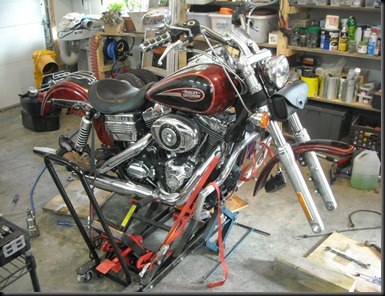 But in the meantime she’s looking a bit ugly.
1 comment:

Sid Biberman fell in love with motorcycles growing up in Norfolk Virginia. A favourite hangout was the local motorcycle shop where he would gaze longingly at the assorted machines for sale or in for repair, and read the motorcycling magazines scattered about. He craved speed and power, and the freedom those represented, so it didn’t take him long to be drawn to the Vincent, arguably the most powerful motorcycle of the day.  And when, in 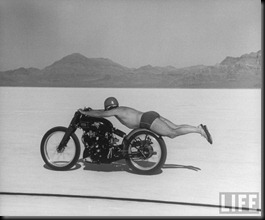 1948,  Rollie Free set a new world record of 150.313 mph for unstreamlined and unsupercharged bikes he was truly hooked.
Fast forward through many years of Vincent ownership and repairs to other owners’ bikes. Big Sid Biberman was the “go to” guy when it came to repairing and refurbishing Vincent motorcycles. But then, Big Sid’s fortunes turned. A serious heart attack, a failing marriage, and financial woes all sapped his will to live. That’s when his son, Matthew, suggested they build Big Sid’s dream bike, a Vincati. 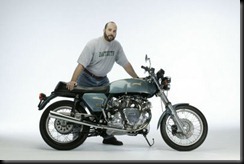 This is the story of Big Sid, son Matthew, and a dream they brought to life. It wasn’t an easy road and the project nearly got derailed on several occasions, but they overcame many obstacles, not least of which was their own somewhat dysfunctional relationship, to make the Vincati a reality.
Almost as a back story to the main narrative, the book provides a fascinating window into the world of vintage motorcycle ownership. Anyone who has been involved in such a community (I’ve dabbled on the fringes) will recognise many of the characters and relationships that develop between people who are passionate about and focused on a single marque – especially one as limited as the Vincent.
Big Sid’s Vincati was a very good read. Recommended.
7 comments:

Every so often, among all the rubbish that flows down the intertubes and across my screen, there will be a little gem. This is one such case.
As one of a series of old photos in a slide show, the picture is not attributed in any way. Nor is there any detail about when or where it was taken. From the styles I’d suggest somewhere in the US in the mid-50’s, but in reality anything you think you know about the photo is guesswork, so it can be whatever or wherever you want it to be.
What isn’t guesswork is at that time these women would have been considered trailblazers by some and outcasts (or worse) by others. But times have changed and these old photos serve to remind us just how much. And who knows, perhaps some of them are still riding today. 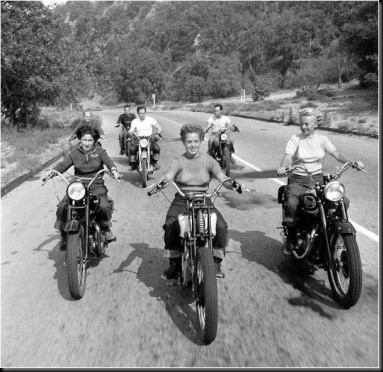 Update: With the comment from No Name over at The Motorcycle Project as a clue, a little more digging discovered this picture was taken July 7, 1949 by Loomis Dean for Life Magazine. There are a few more from the series available here. Thanks No Name.
3 comments: