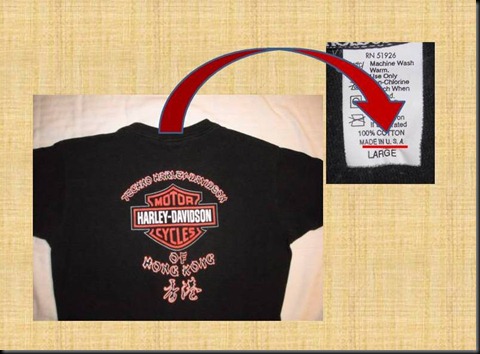 It was a glass half empty kind of day

Well that was a bit of a bust. I went to the Ottawa bike show yesterday, spent a couple of hours surrounded by bikes and bikers, and came away quite disappointed.
After last year’s inaugural show I was looking forward to a bigger and better event with more dealers, more vendors, and more bikes. And there were signs of improvement in some areas. Certainly the show was better attended than last year – in fact the crowds were a bit of problem in my opinion as the venue was small for the number of booths and movement around the show floor was difficult at times. And it was nice to see a few more aftermarket and accessory vendors there than last year. But what was most disappointing to me were the motorcycles themselves.
Based on some previous blog comments (bobskoot and others) I was looking forward to 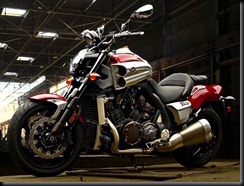 seeing the Yamaha Super Tenere. Well, if Yamaha had one on display I certainly couldn’t find it. Otherwise, all the metric crotch rockets look and feel the same to me, as do all the Japanese cruisers, so nothing of interest there. But the muscular Yamaha V-Max is still a hard to ignore show stopper that, in my opinion, would have attracted more attention had it not been pushed way in the back of the Yamaha display.
Since I have a soft spot for Brit bikes, the new Triumphs were high on my list of must-sees as well – but Triumph wasn’t even present. Nor was BMW, which always has some interesting models to display. Both marques are carried by the same Ottawa dealer which appears to have made a business decision not to be involved this year at all, which was too bad, and I think it may hurt them in the long run. (After last year’s show, a sales rep there told me they very disappointed with the results of their participation, so it’s not surprising I suppose.)
The Harley booth, the largest at the show, was quite good with a couple of new models on display and a selection of clothing and other gear. But I get to see those bikes at my dealer whenever I want, kick the tires, and get a chance to actually talk to a representative without being jostled by people trying to get a better look or a picture of their friend sitting astride a Harley. 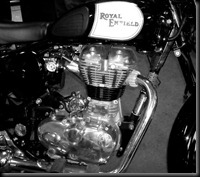 The only motorcycles that did catch my eye were the Royal Enfields. With classic lines these bikes are a throwback to the 50’s in appearance, but under the skin are thoroughly modern with disk brakes, electronic ignition, EFI, modern suspensions, and so on. A very interesting amalgam of old and new, an Enfield would satisfy the need for a nostalgic ride, but in a much more reliable fashion. And they just look great to my ‘vintage’ eyes. Seeing there’s now a local dealer carrying the brand is encouraging, and hopefully we’ll see a few more on the road.
But overall the show did not meet my expectations. I know it sounds like a lot of whingeing, but I’ve been to great motorcycle shows and this just wasn’t one. Still though, it was a day of bikes in the middle of winter, and that isn’t all bad. And next year will be better.
8 comments:

Regular readers of this blog might notice a new name in the sidebar list of “Purveyors of Fine Motorcycle Accessories”.

I’d never heard of J&P Cycles until about ten years ago when one of the technicians at  the company I was working for asked for help in solving a “relationship” issue with J&P arising from a problematic software installation we had done for them.  As a Brit bike owner, my sources for after market parts and accessories typically had addresses like Burntwood, Staffs, WS7 1JP, England and not Anamosa, IA, 52205, USA. But as a motorcyclist I was intrigued by their business and put the name into the “I might be able to use this one day” file.
Then I went over to the dark side and bought my first and only (so far) H-D. Since no Harley ever remains stock for more than a few days (and some never even get out of the showroom in stock trim) one of my first actions was to get a copy of the J&P catalogue, which quickly became my bible. What could be easier than placing an order on-line and having the stuff arrive at your door a couple of weeks later?
I bought quite a  few items from them and was generally pretty happy with the company. Then I had a problem. A minor problem to be sure, involving an LED tail light bulb (all of $30 worth) that didn’t work as well as I expected it should. Of course I didn’t actually try to do anything about it at the time and had effectively written off the $30 until several months later, in the context of another discussion with one of the J&P reps, the bulb came up and he said send it back. Which I did.
Unfortunately, between telephone calls, on-line chat, and e-mails the inevitable confusions arose, the details of which I won’t go into here. But suffice it to say that throughout the folks at J&P were friendly, patient, and accommodating.  And at the end of the day exceeded my expectations for service. (And as someone who ran support organizations for much of his working life, my expectations are high.)
A well known study back in the ‘80s (which I have buried in one of the many boxes of professional debris we all accumulate over the years and are loath to toss in the dumpster for fear of… what?) demonstrated that customer satisfaction was usually higher after a company successfully addressed a customer concern than if the product simply operated in a no-fault manner. And so, knowing they’ll be there when a problem arises, my satisfaction level has consequently gone up from “pretty happy” to “very happy” based on the way I was treated by these good folks. I have therefore added J&P Cycles to my sidebar list of vendors I recommend doing business with.
Note: The author has received no consideration, monetary or otherwise, from J&P Cycles for this post.
8 comments:

It’s hard to keep a righteous crusader down 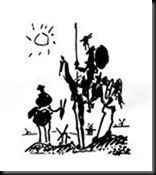 Proving once again that politics is the art of looking for trouble, finding it whether it exists or not, diagnosing it incorrectly, and applying the wrong remedy, Ontario MPP Dr. Helena Jaczek has once again mounted her trusty high horse in an attempt to curtail fun in the Province of Ontario.
Foiled in her harebrained attempt to legislate the age of motorcycle passengers (blogged on here, here, here, and here) Ms. Jaczek has resurfaced with a Private Member’s Motion to the Ontario Legislature as follows:


Note item 1: Imposing minimum age requirements for operators and passengers of non-automobile motorized vehicles. This is clearly just another attempt to resurrect her ill-fated private members bill on this subject, this time hidden in a broader initiative.
In justifying this motion, Dr. Jaczek in a press release states, “In the last 10 years, statistics show us that the number of injuries occurring on all terrain vehicles, snowmobiles, motorcycles and bicycles in Ontario have increased by 66 per cent. It is time to address the safety surrounding these vehicles in a comprehensive way.” Interestingly she offers no evidence of that fact, as if her word was sufficient. Well as we found out the last time she bumbled blindly into this area, her word (and her facts) are neither sufficient nor accurate.
So it’s reality check time (or, trying to keep a politician at least somewhat honest):
According to the latest statistics from the 2007 Ontario Road Safety Annual Report (2007 is the latest year posted online. I don’t imagine the numbers for the 2000-2010 period, if even available, would be much different as the trends are clear), here is the growth in vehicle populations during the 10-year period ending in 2007.

So, in the same period where Dr. Jaczek claims injuries have gone up by 66%, the number of registered motorcycles have gone up by 77%, and a stunning 139% in the case of off-road vehicles.
But according to the same source, motorcycle-related injuries only went up by 17% (from 1440 in 1998 to 1685 in 2007). So, if anything, it’s a good news story. But good news does not apparently satisfy our do-gooder Dr. Jaczek. No, she wants us to focus on the bad news so she can succeed in her apparent goal of ultimately getting motorcycles, ATV’s, and other “non-automobile motorized vehicles”  either off the road, or so burdened and encumbered by silly and unnecessary regulation that the average person (that’s us, folks) just  throws in the towel and says the hell with it, sells all their toys, and buys a gas-guzzling SUV instead.
People like her are truly dangerous.
6 comments: 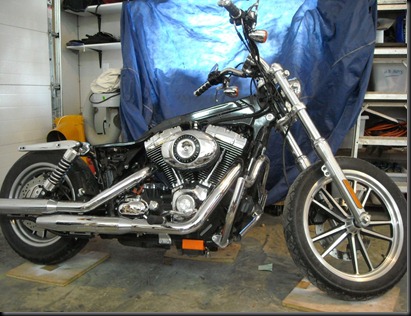 These are the dark days

It’s the middle of January, and here in the frozen north the temperatures struggle to get above –20C (-4F) and the unrelentingly 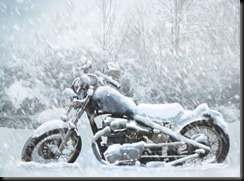 gray skies are wearing pretty thin on the psyche. The snow continues to accumulate.
Biker mags are all well-thumbed, having been read several times while waiting for the next issue to hit the newsstands or arrive in the mail. The stack of catalogues have numerous dog-eared pages highlighting the next must-have bling or serious mod, and every on-line mail-order site is faithfully listed in “favourites” and visited on a regular basis. 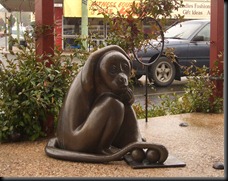 While there’s absolutely nothing attractive about sweltering in a Texas or Arizona summer, it’s that time of year when I can’t help but wish, if only momentarily, that my ancestors had selected some place to live that didn’t freeze the balls off a brass monkey for 5 months of the year.
The short days are spent in the garage (heated, of course) either daydreaming or installing some essential component that was discovered in an obscure on-line catalogue or the result of a fortuitous eBay buy. Two weeks delivery might as well be a lifetime, especially at this time of year.
Even dealer visits fail to break through the doldrums. Shops are quiet – too quiet – and the staff seem lethargic and resigned to just getting through the next couple of months.  ‘Sold’ signs accumulate on bikes on the showroom floor as their new owners not so patiently wait for the day they can ride the new toy home.
The lucky few who will be going to Daytona for Bike Week seem to

weather it a bit better as the excitement builds for a week of sand, sun, bikes, and babes in whatever order of importance is most significant to each individual. But all look forward to escaping winter’s grasp, even if only temporary, like a day pass from the Big House. Sadly, I will not be one of them this year.
And then, just in time to prevent a total breakdown, show season arrives. 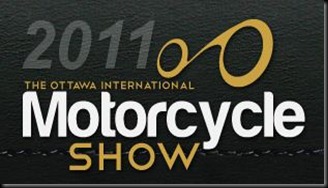