What do you think?

Had an interesting (and, surprisingly civil – no one called anyone an idiot for a starter) debate online this past few days. A rider posed the following question:


When you as a biker come up behind another biker, who is a stranger, do you go into the stagger formation or do you treat it like another vehicle on the road and ride directly behind?

There was a lot of talk about “respect” (whatever that means in this context) and whether it’s safe to assume the lead rider actually wants a riding buddy or would rather you just pass and carry on. But to me the debate boiled down to whether two riders (strangers or not) should ride in line, as you would if you were on 4 wheels following another car, or take a stagger formation with the lead rider in the left tire track of the lane and the following rider in the right tire track.

Most posters said always stagger and some referred to the following excerpt from the Ontario Motorcycle Riders Handbook as being the definitive authority on the matter. (One poster even suggested it was the law. It isn’t.)

Back in the day when I was teaching advanced rider programs the thinking was that the following rider should also assume a left tire track position to help protect both riders’ space, because by doing so it forced any passing vehicles to make a complete lane change before passing. This would also apply to larger groups in a stagger formation. If the sweep, or tail gunner, would normally find him/herself in the right tire track position they should move to the left (and open up a bit more following space behind the rider immediately in front) to protect the lane.

I know I have some readers who are active in motorcycle training and others who are Road Captain qualified. What do you think? What would you do?
9 comments: 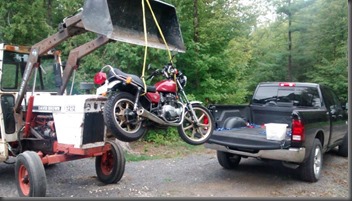 So now I have (another) winter project but it’s so tempting, seeing it sitting there, to just dive right in. Then I look at the half re-assembled S65 engine, the TL125 needing some TLC, and the C65 frame that needs major work – and that’s only the bike projects – and I tell myself to try and finish something else first. But it’s a hard sell.
7 comments:

We’ve all seen variations of this meme: 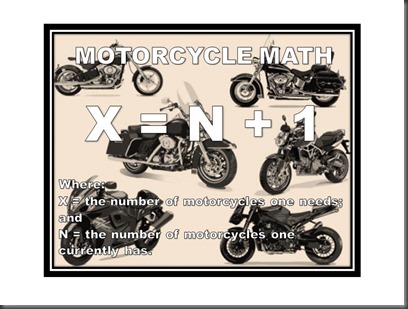 Well, in keeping with the theme of today’s post, N will soon equal N + 1 as I am about to acquire yet another project bike (imagine the missus’ eyes rolling here). This time it’s not an orphaned mid-60s Honda to keep company with the ones I already have, but rather a relatively (with an emphasis on relatively) new mid-80s Kawasaki 440LTD.

Relegated to the back of the garage by the current owner, the bike comes into my possession as a result of a casual comment on the golf course, “It’s yours if you want it.” How could anyone who considers himself a biker ever say no to that?

And so tomorrow I will be in a rental truck heading down Highway 401 to Kitchener to pick up another stray needing some TLC and a home for the winter. It’s a disease for which there is no known cure.
10 comments:

Race of the Century – a review

1908 – 108 years ago – the US was not crisscrossed by an interstate highway system like it is today. In fact, outside of the major population and commercial centres in the northeast, actual roads were few and far between and road maps nonexistent. Travellers either went by train or followed trails and cart paths originally established by settlers heading west, and for the preferred means of travel at the time – horseback – that was more than adequate. And in the winter, when snowdrifts covered even those trails to a depth of several feet, people just stayed home and waited it out.

Such were the conditions when 6 intrepid teams of ‘automobilists’ started the Race of the Century in New York City on February 12, 1908.  Destination: Paris. Seen off by by a crowd estimated to be more than 250,000, the 6 cars (1 American, 1 Italian, 1 German, and 3 French) left New York’s Times Square shortly after 11:00 AM, embarking on what would be an epic 5-month, 22,000 mile journey through some of the most difficult conditions imaginable.

What followed was months of hardship for the teams as they shoveled roads clear of snow with daily progress sometimes measured in yards, not miles. Frequent breakdowns meant waiting, sometimes for days, for spare parts to arrive by train. Rivers and streams had to be forded or bridges built to cross them. Mountain ranges had to be traversed. And that was just in the US. In Siberia, where these would be the first automobiles ever seen, conditions were even worse as spring thaws turned the ground to gumbo. But still they motored on, bent but unbroken.

This is the story of that race, a tale of perseverance and resilience, of ingenuity and strength (both mental and physical), and of a small group of men who ultimately overcame all obstacles put in their path to succeed in what was variously considered either a foolhardy or heroic undertaking at the very dawn of the automobile age.

It is a good read. Recommended.

When it comes to what we watch on TV we all have our guilty pleasures – those shows that we watch faithfully but sort of cringe when we have to admit to watching them. And with the explosion of reality TV over the past decade there’s no shortage of cringe-worthy television, whether it’s Housewives of ---, Pawn Stars, or The Kardashians. Okay, maybe the last example is so bad it doesn’t even deserve to be listed along with, by comparison, such intellectual heavyweights as Duck Dynasty. But you get my drift.

Still, we watch this pap.

My present guilty pleasure (because I’m a serial guilty pleasure kind of guy) is Scandal. Playing in modern day Washington (There’s a First Lady who wants to become President in her own right; how much more modern can you get?) the show centers on a group of lawyers who, by means fair and foul, “fix” things for people who get themselves into trouble of a legal, ethical, or moral variety. Anthony Weiner would be a typical client.

Complicating issues is that the head of the firm is having an on-again, off-again affair with the President, the First Lady is having an affair with the Vice-President who is staging a palace coup, and the Chief-of-Staff is an ends-justify-the-means guy not above using murder and less violent means of coercion to advance his (and the President’s) agenda. Of course this doesn’t all come out in episode 1; you need to spend several many hours in front of the aptly named idiot box before all the details emerge.

And then – Yes! There’s more – there’s B613, a secret paramilitary group established to protect the republic but which reports to no one, not even the President. Funded by hidden budgetary line items this shadowy group is a law unto themselves, causing mayhem wherever and whenever they are deployed. Not above killing US military personnel when they deem it appropriate, or reporters getting too close to a story, or anyone else for that matter, the most remarkable thing about this group is they leave mutilated bodies behind by the dozen that the authorities never seem to notice. That and the fact that they are everywhere, including the President’s Secret Service.

Think of it as a variation of ‘24’ but at a slower pace and not nearly as believable. Seriously.

So it’s all very silly, but it follows the pattern of success for this type of show – get the viewer invested in the characters early on and they’ll stick with it, no matter how stupid the storyline gets, just to see what happens next. But 106 episodes? Good grief, I’ll be at this all night!
6 comments: