I’ve mentioned in a few posts my interest in making cigar box guitars. I don’t play, or perhaps I should just say I play poorly, so for me the fun is in the design and building of these folk instruments. I’ve created 5 or 6 so far but it’s been a year or more since the last one, my attentions being elsewhere in the meantime. 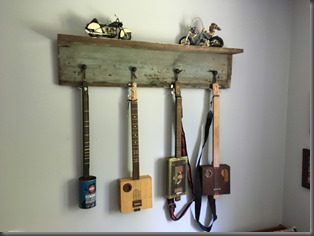 Then, a couple of weeks ago, we spent an afternoon at the Stewart Park Music Festival in Perth where I attended a workshop on building cigar box guitars. The presenter, Mark Hunt, referenced a couple of good books on building various folk instruments, two of which were available from Lee Valley Tools. Today my copies arrived in the post. 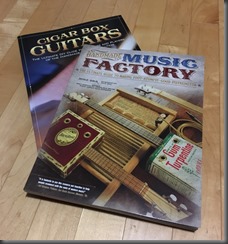 So the flame has been rekindled with my next project being to make a canjo from this H-D labeled beer can. 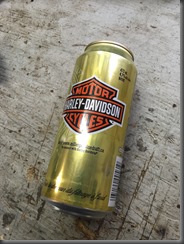 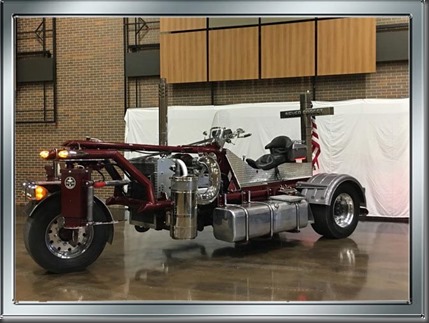 People build all sorts of bizarre, one-off machines, which is ok, creativity is a good thing. But this guy reportedly thinks there’s a market for up to 1,000 of these monstrosities. He may be right – there are lots of people out there with more money than sense – but still, the mind boggles.
6 comments:

No choice at all

I haven’t been doing much blogging lately as enjoying this summer weather has been my first priority. So when it comes down to sitting at the computer, or this….. 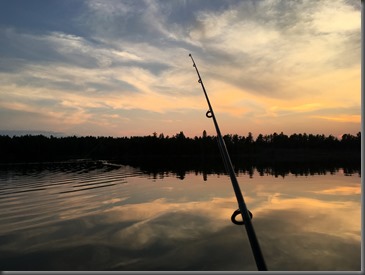 Well, there’s really no choice at all.
10 comments:

Not if you’re on two wheels, eh?

With an unexpectedly freed-up afternoon and beautiful weather it was the perfect opportunity to go for a ride. And while not every ride needs a purpose mine generally involve at least one stop at a Tim Hortons for one of their addictive Iced Cappuccinos and possibly an apple fritter. I also needed some fishing sinkers and hooks to replace the ones the bass made off with the other night.

The nearest Tim’s is in Arnprior, but when I hit the four corners in White Lake I decided that wasn’t far enough; Perth was a better option. So I headed straight through to Burnstown. From Burnstown to Calabogie is a nice ride with a few curves to keep the rider awake, but the best road starts at Calabogie and heads directly to Perth.

Highway 511 has been a favoured riding destination for me for decades. Of course increased traffic and road improvements such as straightening some curves (damn them!) mean it’s not quite as exciting as it was in days of yore when we’d hammer along at ridiculous speeds on our Nortons or Hondas or whatever, but it’s still a fun ride.

After an hour or so the Perth Tim Hortons sign appeared and it was time for a break. As usual there were some riders in the parking lot and conversation ensued. Turns out we had a few friends in common (the riding community really is a small world) and we traded war stories while enjoying our drinks. To add some excitement a squeal of tires across the street was followed by a loud crunch as someone drove his/her car straight into a telephone pole. After the ambulance, police, and wreckage were finally gone it was time to hit the road, homeward bound.

The trip home was a bit longer than I expected because I had to go in search of lead-free sinkers, which, it turns out, are a lot harder to find than one would think with all the concerns about lead poisoning fish, loons, and other aquatic life. But that’s the topic for a future rant.

With all the stops it was about a 4-hour ride covering a little over 200 kilometers. A great afternoon outing for a coffee! 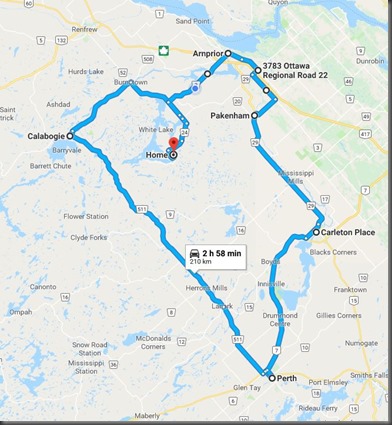