Progress of a (slow) sort

Well I finally got the engine for the S65 all back together. Actually, that’s not strictly accurate. More precisely I got the engine for the S65 (incorporating various parts cannibalized off the C65 engine) back together. I may be slow but I’m also much more efficient than the Honda factory assemblers as I did it using fewer parts. To be fair the extra parts could be from the second engine … or not. Time will tell.

I was going to build a stand-alone platform for testing it but then I realised I already had one in the form of the original frame. So today I bolted it all back into place. A quick run into town tomorrow to get some fuel line and I’ll be able to see if it actually runs or just barfs, belches smoke, and quits.

Ever the optimist, I am assuming it will run, in which case the next decisions will be frame related. Besides having to be straightened, the frame could use some minor body work, but I’m actually considering doing only the work needed to make it safe and forgo cosmetics for now.

One step at a time.
No comments:

Waking up to the smell of burning plastic…

As the lazier member of this particular family unit I usually manage an extra hour of uninterrupted sleep while the spousal unit enjoys an hour of peace and quiet with her first cuppa every morning. That’s normally a good thing and I awake to the smell of a fresh pot of coffee brewing. But this morning was different as I was disturbed by the distinct odor of burning plastic and a wall of smoke when I surfaced from the Land of Nod. Our Bosch dishwasher had burst into flames. Fortunately my wife was right there at the time and was able to extinguish the fire before too much damage was done, but it was still a frightening experience. Who expects their dishwasher, of all things, to catch fire? 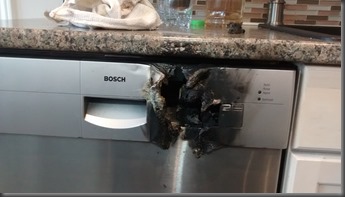 Well, it seems like the manufacturer does. Apparently Bosch made a number of dishwashers in the early- to mid-2000s (this one’s vintage) that are known to be a fire hazard, and multiple recall notices were sent out to have defective units repaired. We never got any notice but there was a move in between so maybe it got lost in the mail (giving them the benefit of the doubt). The recalls had limited success it seems as Internet searches indicate that 10’s of thousands of these machines are still out there with this ticking little firebomb in their circuitry.  (So far two Facebook friends have learned they have affected Bosch units in their kitchens so, if you have a Bosch dishwasher, check their web site ASAP.)

I have reached out to Bosch to see what they are prepared to do by way of compensation but I’m not holding my breath. The machine was nearing its end of life and had served us well until this morning, so I expect the standard warranty disclaimer letter in response. Whatever will happen will happen and eventually we’ll acquire a new dishwasher. And the burnt countertop will be a conversation item for the foreseeable future.

But the real lesson here is about attending to operating appliances.

Over the years we have become so habituated to the ubiquitous presence of these labour saving devices that we simply assume they will function, and function correctly and safely, every time we turn them on. We set the dishwasher (or clothes washer, or dryer, or stove …) and then head out, expecting it will go through its normal cycle and then shut down, just like it did the last 1,000 or 2,000 times it was used. Had we done that this morning I would be writing quite a different post about today’s experience, so I think we’ll be doing a lot less of that in the future.
6 comments:

Not really (although I understand it’s a beautiful place to be from, if I was), but this post reflects on how, in these times especially, we should all be “from Missouri”.

“I’m from Missouri; show me” entered the public domain some time in the 19th century. It was, apparently, popularized by Willard Duncan Vandiver, a Democrat from Missouri who said, in an 1899 speech, “I’m from Missouri, you’ve got to show me”.

“Believe half of what you see and nothing that you hear” is another common idiom. Attributed to many, including Benjamin Franklin and Edgar Allan Poe, it also cautions against blind acceptance.

What brought this to mind was the recent foofaraw over the Bowling Green Massacre. In case you have been living under a rock and missed it, President Trump’s spokesperson, Kellyanne Conway, referred to the Bowling Green Massacre as justification for one of the President’s policies.  As no such ‘massacre’ ever took place she was forced to backtrack, claiming she “misspoke” (or, in common vernacular, lied). Of course the twitterverse exploded with riotous indignation but the damage was done and some actually took her statement as a truth that had been suppressed by a complicit media. Not to be outdone, we also had a recent example in the Conservative leadership race in Canada where a political operative tweeted information he knew to be false, not to help his candidate but just to “make the left go nuts”. And some did, for which he, somewhat unwisely in my opinion, then claimed credit. Then there’s the whole fake news industry that enriched a handful of teenagers in Macedonia over the course of the US presidential campaign and continues to befuddle attempts by social media companies to control it.

All of which is to say, with the (possible) exception of this blog, IT’S ALL LIES! Welcome to the post-truth world.
6 comments:

Sometimes when I have nothing better to do, or am grounded for whatever reason, I will browse the various online markets in search of that elusive interesting old motorcycle that is actually complete and runs and for which the owner isn’t demanding a King’s ransom. So far it has never quite worked out.

Here’s what I’m looking for: 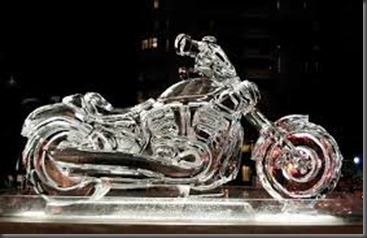 And here’s the kind of thing I usually find that’s in my price range: 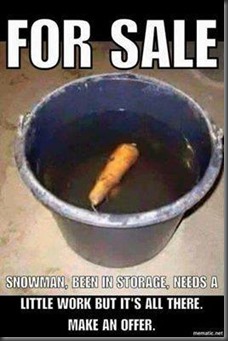 When I do find something interesting and affordable it’s nearly always encumbered by one (or both) of two caveats. It either has “no ownership” or it “needs nothing to pass a safety”. (In Ontario a vehicle cannot be licensed until it passes a basic safety inspection.)

No ownership is an immediate red flag. Especially for older motorcycles for which the provincial records no longer exist (or were never digitized and put on line). If it wasn’t stolen it may have been an insurance write-off or have other dubious pedigree and who needs that aggravation? And the safety? If the advertiser claims it “needs nothing” for a safety that’s code for “I have no idea how bad the condition of this bike is and I don’t want to take it to a dealer because he’ll tell me and then I’ll have to either tell you or fix it before selling.”

So, as with most things advertised and sold on line, it’s buyer beware. But I remain optimistic that eventually the perfect deal will surface so, like buying lottery tickets, I continue to spend time on eBay, Kijiji, Craig’s List, and other sites hoping for that rare win. In the meantime I just have to resist deals like this: 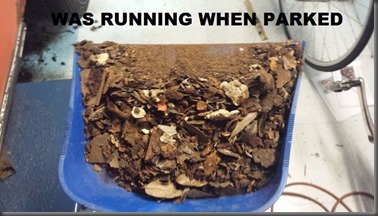