Well that wasn’t so bad.

Another rainy day (gawd I’m sick of this weather) so I figured it was a good time to try and put the pieces together. And so off to the garage.

The first order of business was to sit and contemplate the job ahead. This took about an hour and involved a beer, a cigar, a shop manual, lots of starting at the bike and all the bits and pieces, and some good tunes on the CD player. Now many (spousal units especially) would view this as “wasted” time that could otherwise be spent more profitably helping in the garden. This is a genetic problem that cannot be solved, so it’s best to ignore it entirely.

Eventually the vision formed and it was time to start the disassembly. This is the phase when you realize that a human being is no match for an assembly line robot that torques every nut and bolt to at least 500-ft-lbs. That, combined with a liberal use of LocTite, meant only one thing - impact wrench. Eventually everything was off, with the utmost care taken to not scratch anything chromed or painted, in other words everything, so those parts can find a new home via eBay.

Then it was on with the new.

The quick-detach sideplates for the luggage rack and back rest went on in no time. I had all the parts I needed except for a couple of spacers that were quickly made from some scrap material laying around. (I could have waited until tomorrow when the fastener shop was open, but this way the job is done today.)

The forward controls were a bit more complicated. Here too I had to make some spacers and a nylon bushing so that everything fit nice and snug with no excess play. The bigger issue though is that in order to remove the original shifter link one must either disassemble the complete primary drive side, or cut the shifter link off the shaft and take it out in pieces. The latter option is obviously a one-way street; there’s no going back if I change my mind. And I didn’t have all the gaskets, various seals, and special tools needed to  pull the drive side apart, so I compromised. The old shaft is still there, but it’s held in place with a quick-tie so it won’t rattle or jam the shifter mechanism. Not ideal, but certainly good enough for the time being until I’m convinced I won’t be going back to mid-controls. Then I can decide on hacksaw versus major surgery.

So it’s done. Except for the absence of a back rest, the changes are not that obvious, but should result in a more comfortable ride. Now if it would only stop raining long enough to find out. 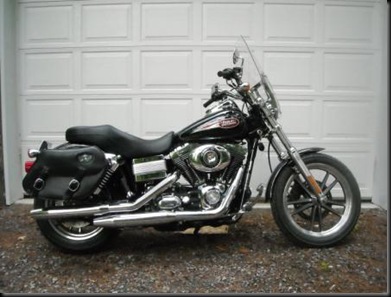