Welcome to the latest addition

I’d been keeping an eye out for a good used bike for the missus as she’d indicated a interest in getting back on two wheels after a rather long hiatus. I started looking for  an older Honda 400 Four, or even 350 Four 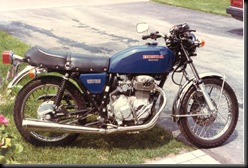 as they are both great little motorcycles – with “little” referring to the fact that they were built to about 90% scale of a full sized motorcycle of the day, a CB550F for example. That made them the perfect bikes for a smaller sized rider, and with lots of power and zip they were fully capable of any legal road speeds and then some. Since she’d owned and ridden a 400 Four back in the day, there was the nostalgia factor as well.
Little did I know that in the intervening years they had become collector’s items, commanding a ridiculous price if in any kind of decent running condition. So the search continued until this past week when I came across this ad.

The bike was a 3-hour drive from home which normally would have stricken it from the list immediately, but I’d always had a soft spot for the Ascot, and this one was all original except for the exhaust and the mini-fairing. When the seller turned out to be a motorcycle mechanic who was also (and perhaps more importantly) flexible on price I became very interested indeed.
And so it was that after a few days of information sharing and negotiations, the deal was struck, and I am now the proud owner of a classic. Or perhaps I should say Miz Liz is now the proud owner of a classic so she can no longer accuse me of taking up the entire garage with “my” stuff. 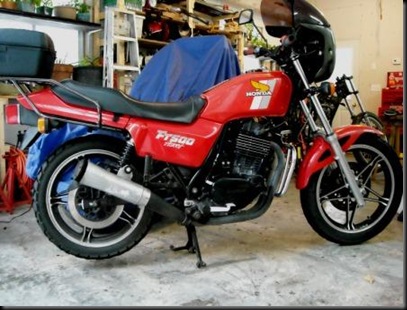