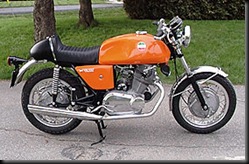 But up there among the illustrious Moto-Guzzis and German-engineered BMWs (this was before there was a BMW parked outside every Starbucks between here and Portland) one bike really stood out for me, the Laverda 750. In it’s finest orange livery it was hard to miss, but if you happened to be visually impaired, or busy staring at one of the “nicest people” you just met on a Honda, the sound was a dead giveaway. You have to hand it to the Italians, they do sound very well, and the Laverda was no exception, you could hear it coming a long way and there was no mistaking that twin-cylinder rumble when under full throttle.
And what brought on this trip down memory lane?
Well today I was in the city running some errands (on two wheels, of course) and I pulled up beside a 1975 Laverda 750 at a traffic light. It has probably been 5 years since I last saw one on the road so I engaged the rider in conversation and found out that the bike was still all original. Of course after 36 years it is showing its age, but it is still a daily rider. The paint has lost some luster and he’s thought about repainting but would like to stay with the original orange. His wife hates the orange and wants to change it, so he avoids the conflict by leaving it just as it is. And when the light changed I held back just that extra few seconds to listen to the bark as he pulled away smartly knowing, I’m sure, just why I paused. Nice.