And here it comes…… 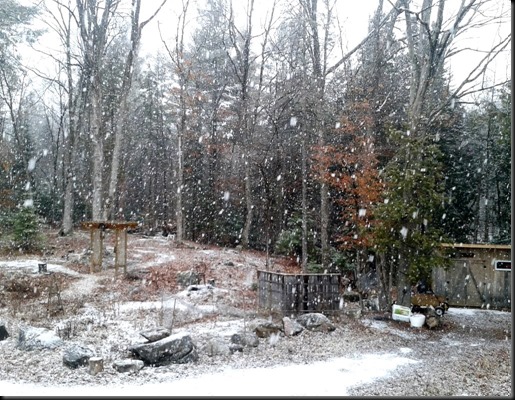 We’ve been fortunate this year to have a relatively mild fall and a late freeze, extending the riding season well into November and even, if you hadn’t already stored your bike for the winter, into the first week of December. But it looks like our bonus time is up, and just in time for Christmas.
Now I could quite happily live in a climate that was 80 degrees every day with evening lows of 70 or so, but such places are few and far between and seem to be mostly small islands that get wiped out every second or third hurricane season.  The only other options seem to be places that are either too hot to ride in the summer or too cold or wet to ride in the winter, and I’m more or less stuck in the latter. But if I have to endure a few months of less than ideal riding conditions I would rather it be snow than rain. I know, I know, you don’t have to shovel rain, but the endless gray skies would drive me insane.
Besides, you have to admit, it is pretty.