It’s not that bad

We motorcyclists who occupy the northern part of North America lament the coming of winter, as inevitable as it is year after year. The days are shorter and colder and snow and ice cover the ground. Riding, unless equipped with studded tires and/or a sidecar and/or a death wish, is suspended for anywhere from 4 to 6 months as Mother Earth goes through her annual cleansing cycle.

In fact, listening to most bikers (indeed anyone whose passion is a summer activity of any sort) you’d think the apocalypse was upon us. But, in truth, winter holds its own sort of magic to enjoy. Like today. 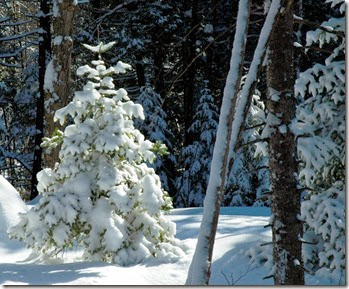 The thermometer tells the tale. It’s currently –27C (-17F) but the air is still so the windchill is negligible, about -30C. At those temperatures exposed skin will freeze, they claim, in 10 to 30 minutes so dressing appropriately is critical.

All bundled up I head outdoors. Chimney smoke curls lazily towards a deep blue sky. The birds - woodpeckers, chickadees, finches, blue jays, and others - swarm the feeders in search of energy to survive the cold, their feathers puffed up to provide as much insulation as possible. The squirrels, usually found performing gymnastics around the bird feeders, are nowhere to be seen, burrowed away somewhere in a rotted tree or underground waiting for milder temperatures.

As I walk out to get the morning paper (about a mile, round trip) the only sounds I hear are the swishing of my jacket sleeves and the crunch of my boots in the snow. I marvel at the frost patterns on leaves and stare at ice-coated branches glinting in the sun. Nocturnal tracks of prey and predators crisscross the road, and a 3-foot imprint of spread wings in the snow signal the demise of some small critter at the claws of a barred owl, most likely. Even the ice on the lake is quiet today, waiting for a temperature change before starting up its own chorus of groans, cracks, and booms. 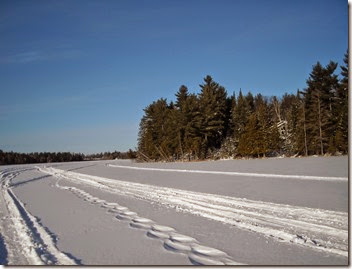 Yes it is cold, but so beautiful and peaceful that I can forget about riding for a while and just enjoy the season for what it is.