Every so often I am confronted with an image that causes me to lean back in my chair and contemplate a place or a time far different from the one I currently occupy. I don’t know what, specifically, catches my eye and why it evokes such a reaction for it’s a pretty eclectic mix, but it happens. 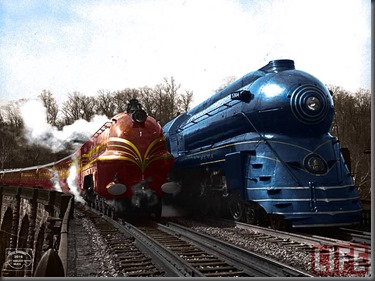 Taken back in 1939, this is a photo of two streamliners running side by side while traversing the Thomas Viaduct on a run between Baltimore and Washington. The train on the left is the Coronation Scot, a British passenger train on a publicity tour of the US, and the one on the right is B&O’s Royal Blue.

While stunning in their own right, this picture represents more than just a couple of very photogenic trains on a Roman-inspired bridge. At the time the world had spent nearly ten years living under the brutal constraints of a punishing depression and facing, with increasing certainty, a European war that would eventually become global. It was a tough spot to be in – “a rock and a hard place” doesn’t seem to do it justice. Yet for all that people still found a way to live and innovate and be optimistic and create beautiful things.

Not a bad lesson I think.