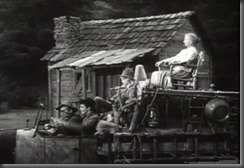 For those with fewer trips around the sun than I’ve experienced, The Beverly Hillbillies was a ‘60s sitcom where a poor, uneducated (at least formally), family from Tennessee or thereabouts strikes it rich and moves west, going from a 1-room shack to a mansion in Beverly Hills. Playing on stereotypes the family’s fish out of water experiences in this new world lead to much hilarity – or at least a lot of laugh track usage.

There is also the post turtle story, trotted out after every election, where the wise old farmer says (when describing why and how a turtle came to be perched on top of a fence post): "You know he didn't get there by himself, he doesn't belong there, he doesn't know what to do while he's up there, and you wonder just who in hell put him there."

I was thinking about these things while contemplating the impacts of Donald Trump’s win, one of which is their upcoming move to the White House in January. It’s not a rag-to-riches story like The Beverly Hillbillies; it’s more like a riches-to-rags story. Like Uncle Jeb trying to decipher what a billiard (billy-ard) table is used for (eventually deciding it was the fancy eating table) I can see The Donald looking at plain white porcelain bathroom fixtures and assuming he wandered into the servant’s quarters by mistake.

Donald Jr. and Eric will be out in the back yard practising marksmanship (and entertaining the NRA) by shooting squirrels and anything else on four legs that wanders into range, while Melania goes all Elly May with cut-off short shorts and a plaid shirt tied up under her breasts showing off plenty of cleavage and a toned midriff.

Both President Obama and Secretary Clinton quite properly expressed their support for President-elect Trump and made it clear that all Americans should do so as well. He won the election and deserves the benefit of the doubt that he will be a good President for the next four years.

But when I think of this rich, entitled First Family moving from their lavish, gaudy, over the top penthouse in midtown New York to the White House, a house previously occupied by so many statesmen and people of modest origins, that post turtle isn’t far from mind.