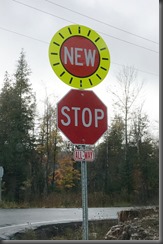 Hopefully pulling errant motorcyclists out of the ditch at this intersection will now be a thing of the past. And all I have to do is contend with all my rural neighbours who are now pissed at me because there’s yet another stop sign to deal with on their drive home. But they’re not likely to stop anyway, so I’m not too worried.