The Serial Hobbyist. Doesn’t that sound like it could be the title of Dashiell Hammett’s latest blockbuster? Or would, if he hadn’t died in 1961. But still… Imagine Sam Spade, with a leggy blonde at his side, chasing down a nogoodnik who leaves unfinished projects lying around for unsuspecting spouses to discover and ask, “How much did that cost?” before being silenced … forever.

Sadly, that’s not the case. No, “serial hobbyist” is the caption that appears under my photo in Wikipedia.  The only constant theme has been a love of motorcycles and riding and wrenching – the others come and go and sometimes return. Astronomy – or more accurately stargazing, cabinet making, wood turning, metal work, hobby electronics. Jump in with both feet for a while, then something else catches my eye. “Ooh, look, there’s something shiny over there”. Or, “I could make one of those if I had a plasma cutter.”

But eventually it all comes home to roost, as the saying goes. After finishing the sewing machine table I decided it was past time to clean up the garage (a detested autumn ritual). And while doing so I came across the following: a cigar box guitar that needs to be finished and parts for a couple more, an electronic programmable timer I built for a solar powered light that needs repair along with the solar panel, a fully dismantled Honda Ascot engine that I had plans for (can’t remember what at this moment although I'm sure it was brilliant), a pile of woodturning blanks (just need to cut away anything that doesn’t look like a vase), a completely dismantled 1965 Honda S65 motorcycle (long-term project), a couple of 1981 Kawasaki gas tanks that need repair and paint, a reluctant snowblower (it was free!), an old chainsaw that needs attention, and said plasma cutter collecting dust in the corner. And all that after just the first layer of 'stuff' was removed/organised. 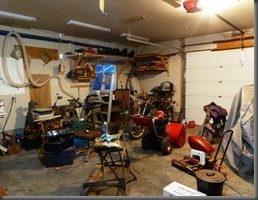 As the expression goes, sometimes the bodies are best left buried.