The Phillips head screw (with the + shape) was first developed in the 1930s to be used on automobile assembly lines. Some time later the Japanese created a slight variation called the JIS (Japanese Industrial Standard) or, more specifically, the JIS B 1012.

While they look like the standard ISO screw, trying to remove or tighten a JIS screw with the usual Phillips head screwdriver found in everyone’s toolbox can, and often does, result in damaged screw heads, skinned knuckles, and lots of cursing. In the worst case this results in the mechanic(?) eventually having to drill out the damaged screw. To this I can speak from experience.

Fortunately JIS screws are usually marked with a small dimple on the head itself. However this is not foolproof, so sometimes it’s just best to assume that when working on a Japanese motorcycle that any cruciform-head screws will be JIS. And that’s not such a bad idea as a JIS screwdriver will work better in an ISO screw than vice versa anyway.

The point of all this – and there is a point – is that many, many years ago I had a pretty good set of JIS screwdrivers that saw yeoman’s duty on the various Japanese motorcycles I owned at the time. Unfortunately, at some point during several intervening house moves, they disappeared, along with countless 10mm sockets and wrenches – another necessity of which one can never have too many. So I have been making do with Phillips screwdrivers, hence the above comment about experience.

But after stripping and having to replace the umpteenth small screw (brake master cylinder cover screws are the worst – my parts guy insists they are made out of soft cheese) I finally broke down and ordered a replacement set. They arrived today, direct from Japan, and I can’t wait to start scr… er, removing screws. 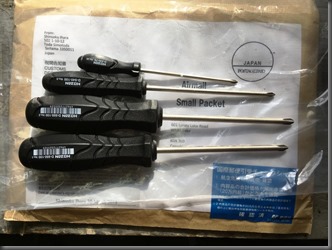 If you are interested, Web Bike World has a write-up that provides more detail on the specific differences between the types. https://www.webbikeworld.com/jis-screwdrivers/