I’d been hearing about some good riding roads a couple of hours from home. Since I had a free day and had been wanting to take a long’ish ride for some time, I headed out yesterday morning under cloudy skies but with the promise of sunshine and hot temperatures as the day progressed.

After skirting a nasty storm (Where was THAT on the forecast?) over near Hopetown I hit the South Lavant Road. Running through Poland, Lavant, Ompah, and Plevna this road is made for motorcycles. While the road is rough in places there are lots of hills and curves to demand one’s undivided attention. And while there were few other vehicles on the road, those that I did encounter seemed to be piloted by locals with no place to go and absolutely all day to get there. Given the twistiness of the road it sometimes took a while before a pass could be (somewhat) safely made, but before long I would have nothing but empty highway in front of me again.

Dropping down the Ardoch Road from Plevna I encountered one of those heart-stopping moments every driver experiences once in a while. Cresting a blind hill at about 80 kph I came face-to-face with a Darwin candidate riding a 3-wheeled bicycle with 4 or 5 large dogs on leashes. Coming towards me. Taking up most of my lane. Fortunately there was no oncoming traffic so I was able to brake and swerve into the other lane while his dogs (I think they were Dobermans, but I’m no expert) decided they liked the looks of my shin bone and went nuts. I had just passed a couple of pickup trucks with 4X4s in the backs – good ol’ boys I expect – and can only hope they saw this fool before he and/or his dogs became “grilled” meat. Of course this all happened about 2 minutes after I had turned off my camera.

Swinging back up Highway 7 towards Perth (and a Tim Hortons – it was lunch time) I ran smack into the back-to-school/back-to-university parade. Kilometer after kilometer of bumper-to-bumper stop-and-go traffic comprised mainly of U-Hauls, loaded pickup trucks, and SUVs packed to the ceiling with boxes, blankets, pillows, and kids made the last leg into Perth a nightmare. And any not actually on the road were to be found in front of me in the line to order food at Tims. I guess future rocket scientists have to eat too.


Then it was back on the secondary roads in a roundabout routing home. 350 kilometers, 6 hours, some new (to me) roads, and I managed to not get rained on. A pretty good day. 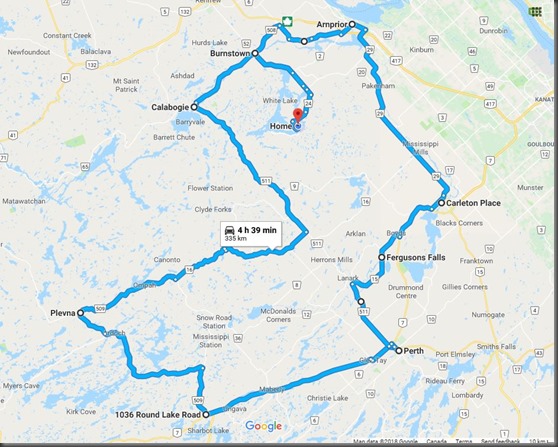