Shortly after we moved into our last house, an elderly gent stopped by one day when I was washing the Norton in the driveway. Turned out he lived just a couple of doors away and used to ride one himself – a 1956 Featherbed as I recall. He said he had been thinking about getting another bike, but this time it would have to have three wheels because his balance wasn’t so good and he didn’t feel he could handle the weight safely any more. He was, “almost 80 y’know.”
Anyway this went on for a month or so. I’d be outside puttering around and Fred would show up for a chat and to ask my advice on Honda versus Harley, or trikes versus sidecars. I knew nothing about three-wheeling, but that didn’t stop us from spending time just shooting the breeze. 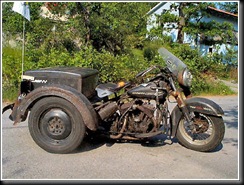 And then one day Fred showed up on an old Harley Servi Car he’d picked up from somewhere. Cosmetically it was in pretty rough shape – in fact it looked ugly as hell - but it ran well and Fred was in seventh heaven, riding again. Every day he’d be out driving up and down the street, with a huge ear to ear grin on his face. He’d make the odd trip to the grocery store or the beer store, but he generally stayed pretty close to home as he  got accustomed to his new wheels.
Finally one day he had to drive into the city to take his bike in to the shop for some routine maintenance. I watched him head off, all leathers and gloves and helmet and goggles and bright orange safety vest. His wife Marjory stood on their doorstep, wringing her hands with worry about “the old fool” – her pet name for him whenever it came to anything motorcycle. I must admit a certain amount of concern myself, but nothing to be done about it now.
But sure enough, a few of hours later I heard the old Harley as Fred came putt-putting down the street. I walked over to his place as he parked it and had just started to ask how the trip was when Marjory came racing out of the house, hugely relieved. “I just heard on the radio” she said, “the police were warning drivers on the Queensway about someone travelling the wrong way”. “I was worried sick about you.”
Fred, pulling off his helmet, replied, “Nothing to worry about, I’m fine.” Then added, “But it wasn’t just one person going the wrong way, there was hundreds of them.”